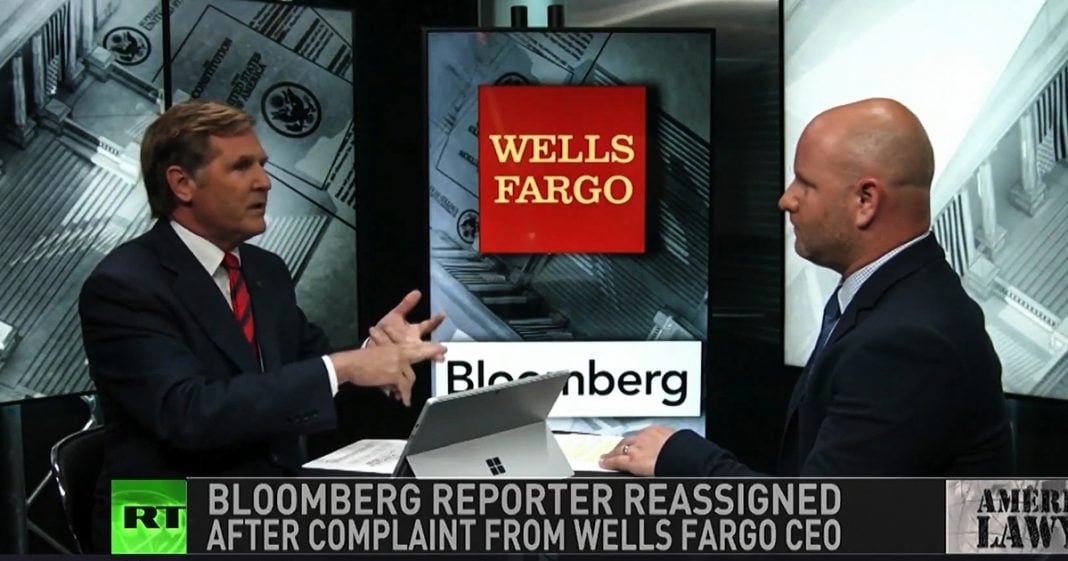 Via America’s Lawyer: Mike Papantonio is joined by Farron Cousins to discuss a reporter that was recently reassigned after writing an unflattering report on one of Bloomberg’s advertisers.

Mike Papantonio: You know, if you have any doubt about how bad the corporate media is, then consider this. A story of how a reporter was recently reassigned after writing an unflattering report on one of Bloomberg’s advertisers. Now, you and I have had firsthand experience of this very thing. That is, you produced the show where I went on Joe Scarborough’s show. By the way, you used to be my law partner. Interesting connection most people don’t understand, but I appeared on a show, and I talked about a wood that was arsenic-soaked wood that they were using in children’s playgrounds. Well, after I did the story, the PR people call up MSNBC and that little worm of a person, Phil Griffin, caves in, asks me to go back on the air and apologize. Of course, you know what I said. I didn’t do that. I’d let Joe apologize if he wanted to. This is the same deal. This is where advertisers are in controlling Bloomberg. This is all about money. Pick it up from there.

Farron Cousins: Yeah. We had the CEO of Wells Fargo call Bloomberg because they were upset that one of their reporters did a story. They’d worked on it for a long time and found out Wells Fargo is the go-to bank for the gun industry. You know, the NRA, everybody. They’re putting their money through Wells Fargo. So, they did the story. I mean, that is such a harmless attack for Wells Fargo to overreact to because we have our little rap sheet here that we use all the time-

Mike Papantonio: Yeah. What is the rap … This is amazing.

Farron Cousins: They could have done stories instead on the 5.5 billion in mortgage abuses from Wells Fargo, the 2.9 billion in banking violations, 1.5 billion on toxic securities abuses, 1.2 billion on false claims acts-

Mike Papantonio: Which, by the way, they didn’t do stories. Now, they did some of the stories, but not the real big stories. This is a repetitive corrupt company, and so now, this story has to do with guns. They go berserk about guns and they reassign the reporter, which is to say we don’t want to lose advertising money. Wells Fargo spends a lot of time, a lot of money with us, and we don’t want to do that.

So what MSNBC does is they phase him out. That story’s really not understood why he was phased out. He was phased out because you had management, you had Andrew Lackey or Lack, whatever his name, and Phil Griffin in their little effort to say what matters to us is not really the news. We don’t really care about the news. We care about advertisers, and he was forced out that way. Same thing’s happening here. This reporter isn’t forced out, he’s just moved to Siberia, isn’t he?

Farron Cousins: Well, yes. Exactly. With this reporter in Bloomberg … And I guarantee you, if there’s any kind of contract involved, which there are frequently. As soon as that contract is up, they’ll be able to fire this reporter. Ed Schultz was treated so poorly by MSNBC, people don’t remember, they bumped his show around to so many different time slots, you could never keep track of it. But this is what the corporate media does. Every major news outlet, MSNBC, CNN, Fox, Bloomberg, ABC, everybody but CBS-

Mike Papantonio: We don’t have … Look-

Mike Papantonio: This station, RT America tells stories that none of the other stations can, the networks can’t tell because you’ve got some cat up on the 50th floor with an abacus figuring out how much advertising money they’re going to lose. It’s this idea of we gets criticized. Pap, why are you doing RT America? Farron, ’cause they understand we do Ring of Fire, we do very liberal stories, and we’re always … We try to call balls and strikes. We’re allowed to do that here, but you really can’t on MSNBC. You can’t on CNN. You can’t on the corporate networks, and this is what happened here. This is just another iteration of that with Bloomberg News telling a reporter, “You’ve made our advertiser mad. We want you to come on the air and apologize,” which is what this cat actually had to end up doing.