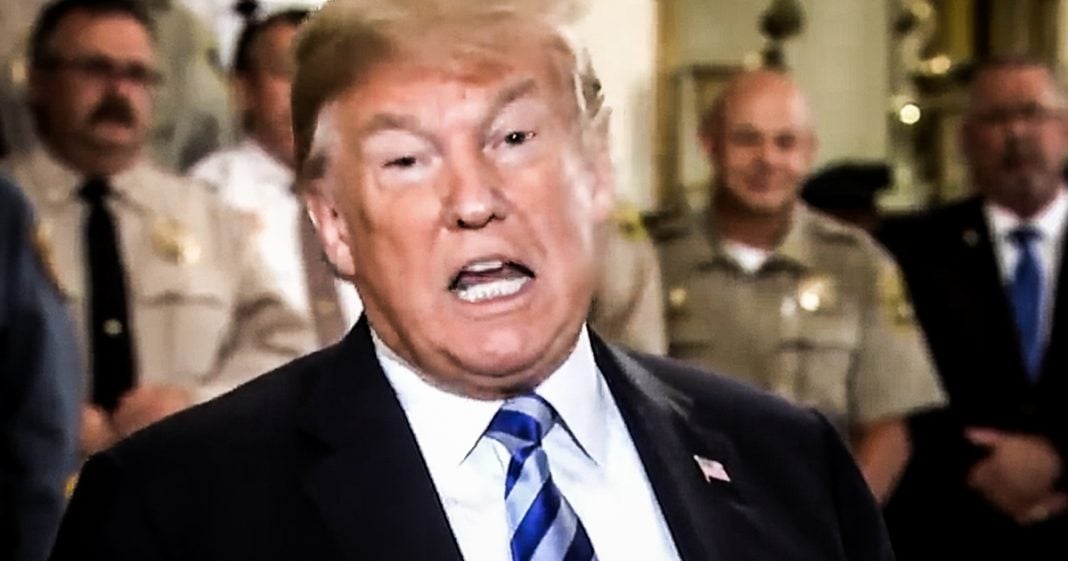 Donald Trump is said to have erupted with a volcanic fury over the New York Times op-ed that ran this week claiming that the President was mentally unfit to serve as President and that staffers were acting as a form of “shadow government” to prevent the President was going over the edge and destroying the country. The op-ed, allegedly written by a Trump administration staffer, has sent the President into a frenzy, not knowing who he can trust until he finds the rat. The end of this administration is clearly within sight, as Ring of Fire’s Farron Cousins explains.

Donald Trump is absolutely furious about the New York Times op-ed that came out this week allegedly written by a member of the Trump administration. And because Donald Trump doesn’t know who this anonymous staffer is, he is absolutely losing his mind trying to find who this person could be. Now so far we have had people like Mike Pence and Pence’s chief of staff have to come out and say, “No, no, no. It 100% is not me.” Mike Pence was one of the early suspects I guess, because of the use of the term “lodestar.” Kellyanne Conway’s name has also been floated out there as somebody who could have possible written this thing, because as people have pointed out, she’s relatively young, she could still have a future in DC, her husband hates Trump, she’s got kids she’s got to care about, so she still needs a career once she leaves here.

But I don’t think it’s them. I think this is likely somebody who’s a little bit of a smaller fish. Somebody who’s name you wouldn’t ever recognize if they came out and said “Yes, it was me.” I could be wrong, we don’t know, it’s all speculation and that’s why Trump is losing his mind. He tweeted out first and foremost that, “Obviously the failing New York Times has published this thing. They’re horrible. This person is gutless, but if indeed this person does exist the New York Times has to immediately hand them over to the federal government for national security purposes.”

Now, I don’t know about you, but I don’t see how in anyway what this op-ed has to say or what this person wrote in the New York Times, how that is a national security issue. This is just a person talking about their job inside the White House. Yeah, whether you agree with it or disagree with it, whatever, but there’s nothing of national security importance written in that particular op-ed that wasn’t already available to the public.

So yeah, I’m going to have to go ahead and disagree with you on that. And again, it obviously has nothing to do with national security. You just want to know where the rats are. You want to find out who you can trust within your administration and let me give you the best answer possible Mr. Trump, the answer is nobody. You can’t trust anybody. Everybody’s out to get you.

That may not be true, but really the rest of the people in this administration do have to be concerned about their futures. You know, you have young staffers there. People in their late 20s or early 30s, that have 30, 40 more years of work ahead of them. We already know that many of these staffers who have left are incapable of finding new jobs because nobody wants to hire anyone who worked for the Trump administration. Hell, reports have come out saying they can’t even find dates because nobody wants to date a member of the Trump administration.

So this op-ed was an effort by this person, probably on behalf of several other people, to save face. To save their career, and hopefully cement their conservative roots inside of DC, so that they can go on and work again in the future for a think tank, Republican members of Congress, maybe another Republican president, who knows at this point.

But the important thing is that Donald Trump doesn’t know, and he’s going to be living in fear until this person finally comes forward and says, “Yes. It was me,” but until then Trump can’t trust anyone in his administration.