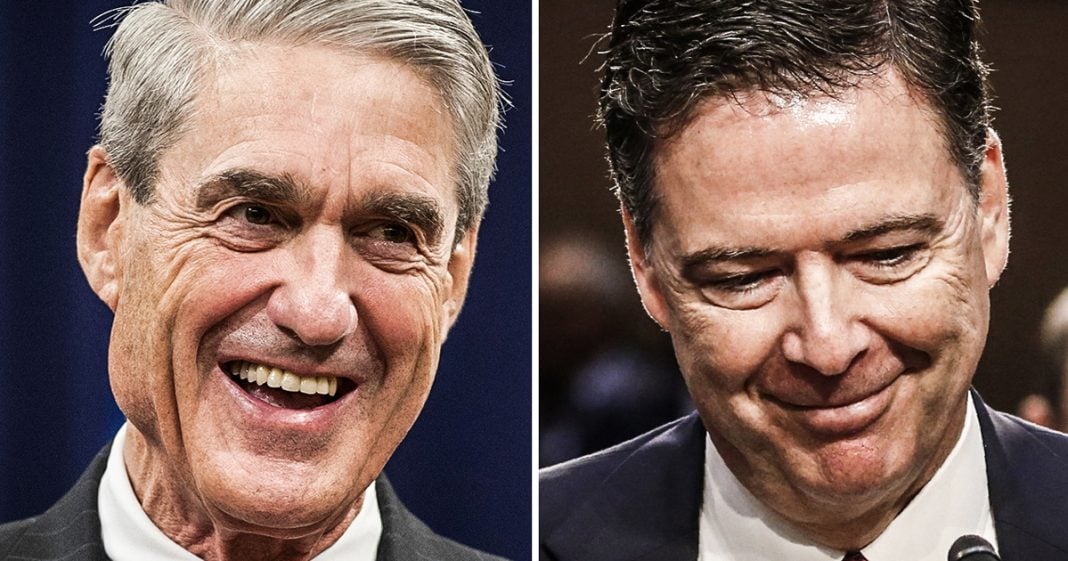 In a truly bizarre interview published by The Daily Caller this week, Donald Trump claimed that he had hundreds of photos of James Comey and Robert Mueller “hugging and kissing” each other. While it isn’t clear exactly what the President is implying about their relationship, the point he was trying to make is that Mueller and Comey are friends and somehow that makes this whole investigation illegal. Ring of Fire’s Farron Cousins discusses this.

I know everybody’s kind of obsessed right now with the Bob Woodward book, the New York Times op-ed and for good reason; those are very important stories. But if you’re only focusing on those, you may have missed a story from the Conservative Daily Caller this week, where Donald Trump said, and there’s a transcript, of this conversation he had with the Daily Caller reporter, you find it in the link below this video. Donald Trump claims that he has 100 pictures of James Comey and special prosecutor Robert Mueller hugging and kissing. Now before I read his exact quote here, let me just explain that Donald Trump is trying to say that these men are good friends, that is why this investigations taking place because Robert Mueller has an ax to grind with Donald Trump, everything’s tainted, everybody’s corrupt. But instead of really saying it that way, here’s exactly what he said. “I had a real business dispute and he’s Comey’s best friend and I could give you 100 pictures if him and Comey hugging and kissing each other. You know, he’s Comey’s best friend.”

I don’t even know what to say. I honest to God, don’t know what to say or how to respond to this crazy, completely insane thing that President just said here. First and foremost, even if these men are friends, Comey didn’t appoint Mueller. That wasn’t him. And Mueller is a Republican appointed by Republicans to investigate a Republican. Trump goes on later and he says this, “Then you have the conflicts of the people. You know I call them the 17 angry Democrats. I guess they’re being lowered down now. It’s incredible when you look at Andrew Weissmann and all these people. Some of the people work for the Hilary Clinton Foundation; it’s an incredible thing. Honestly people are very angry about it. People that love our country are very angry about it. So I consider it to be an illegal investigation, it should have never been allowed to have happened.” There are so many lies and untruths in this entire interview that Trump gave to the Daily Caller. Obviously they didn’t point any of them out. But what’s happening here is that Donald Trump is on his last leg.

He is doing everything possible to discredit this Mueller investigation. Now he’s trying to get into little more detail about how conflicted Robert Mueller is, none of which is even close to being reality. Mueller doesn’t have an axe to grind with Donald trump; he’s not just out to get him because he doesn’t like him, which is something Donald Trump also claimed interesting his interview. Again if you can stomach reading the transcript, I do suggest you go do that. But Mueller’s just doing the job he was appointed to. He was appointed for. He didn’t volunteer for this and say, let me go after this guy, I’m gonna get him. He was selected, chosen, by Republicans, who assumed this would go nowhere. Mueller’s doing his due diligence with this. He doesn’t just want to take Trump down. In fact, he’s done everything he can to bend over backwards to make sure that Donald Trump is okay with everything that he is doing, including this week saying, that okay I’m gonna let you submit some written answers to the questions that I have instead of making you sit down and talk to me face to face during all of it.

Yeah, that works in Trump’s favor. But nonetheless, Donald Trump is not gonna relent, he’s not gonna give up because at the end of all of this, when that Mueller report comes out. If they let it come out because Rudy Giuliani also said earlier this week, he doesn’t know if they’ll let it be released, when he’s finished. But when it comes out, it’s gonna make Trump look really bad and the only way for him to fight that at that point, will be to have already convinced his followers that Mueller is corrupt, that he’s incompetent, that he was plagued with conflicts of interest. But that’s not going to help him. Support from the Mueller probe is at an all time high while disapproval for Donald Trump is also at an all time high. So I think at this point, the public is gonna side with Mueller over Trump, even if he has 100 pictures of Mueller and Comey hugging and kissing. First of all, they likely don’t even exist and second of all, even if they did, how would that matter to anyone, anywhere for anything.

Trump is desperate and he’s trying to paint these men as corrupt and possibly something else to plant in the minds of his little followers about them allegedly hugging and kissing just to try to discredit them. If I were Robert Mueller, I would go ahead and put this investigation on the fast track just to shut the President up.