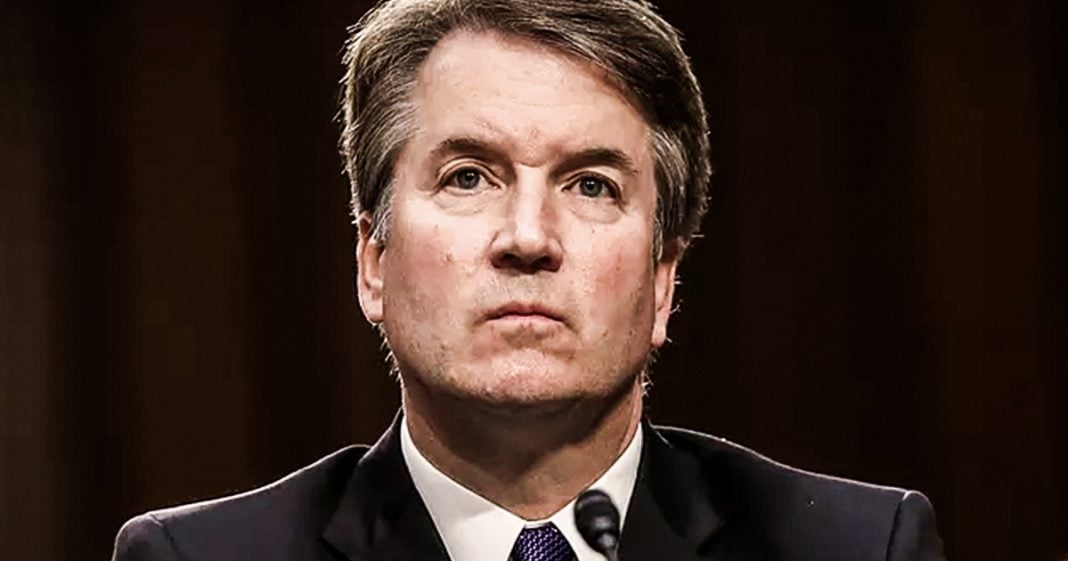 During a very intense hearing on Wednesday, Supreme Court nominee Brett Kavanaugh was forced to answer questions from Democratic Senator Patrick Leahy about the role he played in the hacking of thousands of emails from Senate Democrats around 2004. The emails contained information about Bush judicial appointees and their various conflicts of interest, and Kavanaugh helped release these emails to give the nominees the upper hand in their hearings. Ring of Fire’s Farron Cousins discusses this.

We’re now into day three of the hearings into Brett Kavanaugh, the nominee from Donald Trump to be the next Supreme Court Justice. But let’s talk about day two for a minute. First and foremost, Kamala Harris kind of stole the show there with her amazing line of questioning for Kavanaugh. Cornering him on issues like whether or not he talked about the Mueller probe with lawyers from Donald Trumps law firm.

Kamala Harris absolutely demolished Brett Kavanaugh. And did a phenomenal job of showing us just how incompetent and untrustworthy this man truly is. But before that even took place we learned something that should on it’s face completely eliminate Brett Kavanaugh from consideration for the US Supreme Court. And that line of questioning actually from democratic Senator Patrick Leahy.

And it related back to an incident that took place around 2004 with Brett Kavanaugh when he was working inside the Bush White House trying to push through some of these Bush appointed judges who were just as bad as the ones that Trump is packing our courts with.

But Kavanaugh actually received stolen emails from Manuel Miranda who was working for Orrin Hatch, Republican senator at the time. And these emails were stolen from six different democratic senators, hacked, they were stolen.

There were over 4000 of these emails that were illegally obtained. And Brett Kavanaugh was a part of that because he helped leak these emails which contained information about how horrible these Bush administration appointees were. It pointed out the conflicts of interests.

For example, one woman Priscilla Owen who had taken a ton of money from Exxon, and then ruled in favor … Excuse me, Enron, not Exxon. Ruled in favor of Enron to the tune of about 15 million is what Enron ended up saving. She made a lot of money from Enron as well.

So lots of conflicts of interest there. People who were less than qualified to sick on a bench for a lifetime appointment. And Kavanaugh helped obtain those emails and leaked them to the potential nominees so that they could get a head start on the line of questioning that would be taking place.

These were illegally obtained emails. Kavanaugh knew it because Miranda gave them to him. And he didn’t care. Kavanaugh has no credibility whatsoever. And honestly, working with somebody who you knew stole these emails and still spreading them around, giving these nominees the jump on what the questions were gonna be from the democratic senators who knew they weren’t worthy of being on the bench, that is disqualifying.

But is that gonna stop any of the Republicans from voting against this guy absolutely not. It’s probably not even gonna stop all of the democrats from voting for this guy. You’ve still got your Joe Mansions out there who are probably gonna be a clear yes vote on Kavanaugh.

But this man is a borderline criminal. He is corrupt as hell as we saw through that questioning from Kamala Harris. And the potential criminal activity from Patrick Leahy’s line of questioning.

There should be no question in the minds of every single American citizen that Brett Kavanaugh regardless of your political affiliation, this man is not trustworthy enough. He is not honest enough to serve a lifetime appointment on the US Supreme Court. And that doesn’t even begin to touch what a horrible corporatist this man would be.

All we need to know at this point, aside from his pro corporate, anti consumer leanings, is that this man will do whatever it takes legal, or illegal to get ahead in life. And that is not exactly the kind of quality of person that you want to see on the US Supreme Court.