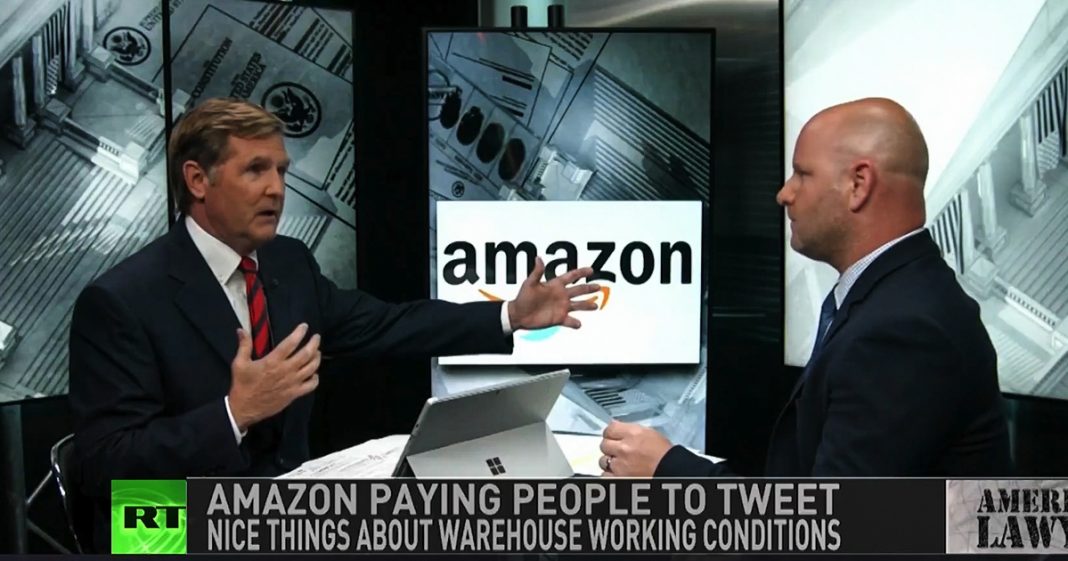 Via America’s Lawyer: Mike Papantonio and Trial Magazine Executive Editor Farron Cousins discuss the latest with Amazon and just how bad the workers at Amazon have it, and why CEO Jeff Bezos is desperate to hide that truth from the public.

Mike Papantonio: Jeff Bezos would have to spend $28 million every single day in order to avoid getting any richer. That’s roughly how much he pulls in on a daily basis from Amazon.com, the government contracts, and of course, advertising in the Washington Post. And while Bezos is enjoying his status as the richest human being on earth, the employees of Amazon are forced to live off government assistance, wear tracking monitors so the company can monitor how fast they’re working and even if they have to urinate, they have to urinate in water bottles while working. This is kept up under that monitoring program. Bezos certainly doesn’t want these kinds of stories reaching the public so he’s hired an online goon squad to fight his critics. And I have Farron Cousins from the Trial Lawyer Magazine to talk about that along with some other stories.

Farron, you know, look … Bezos … there’s so many stories about this guy that he’s been so protected for so long. The story that comes to my mind, of course, is right here on the radar. It is that he has a bunch of flying monkeys that he has hired to go on “Tweetersville”, go on Facebook, show up everywhere to talk about how important and what a great guy Bezos is. Take it from there.

Farron Cousins: It’s really interesting because Amazon … they’re not denying this. They admit, yes, we have these out there. They’re ambassadors to Amazon. They all worked in the factories, they know what they’re talking about, they worked in the warehouses, they’re good people. But no, what they are … they’re people who’ve just been hired to go out there and fight what essentially Bernie Sanders started which is people telling the story of how horrible the conditions are. Bernie Sanders was very successful doing this with the workers at Disney Properties, having to live in their cars … told those stories … Disney changed. Amazon doesn’t want to change so now they’re out there specifically attacking Sanders, his supporters, and anyone else who mentions that … Oh yeah, your workers are having to urinate in water bottles because you won’t give them bathroom breaks. They’re too afraid to take a break because you may fire them.

Mike Papantonio: So Bezos’ wealth increases about $260 million every day.

Mike Papantonio: While he’s doing that, he has workers that are living on, in other words, taxpayers are footing the bill, both on the way the delivery of items through the post office, because he’s not being charged the proper amount of money and the idea that taxpayers have to take care of his workers because they don’t have enough food to eat. They don’t have housing, they don’t have proper healthcare. So all of this is going on and here is the part of the story that drives me crazy that the media doesn’t talk about because it’s very … The Washington Post is absolutely part of the spook industry and it’s so evident. Here you’ve got a guy who makes billions of dollars through government contracts and the government contracts is, how do you spy on people. How does Amazon spy on people?

The Washington Post is merely an extension of that. And you’ve seen a couple of writers talk about … I think Matt Taibbi’s talked about it, you see some people getting around the edge of it but we have to start looking at The Washington Post as simply an extension of the spook industry. So he’s got that coming at him, people are starting to figure that out. He’s got this coming at him, but he seems like he doesn’t … he’s not phased by any of this.

Farron Cousins: Right. For the longest time, Amazon.com, itself, was not turning a major profit so where Bezos gets all of his money is from these contracts that Amazon has to provide these cloud services and other generic services for the Department of Defense, which includes the Pentagon, the CIA, everything. Amazon’s their go-to company for any kind of digital services which, as you pointed out, does include … it includes drone technology at this point and that’s where Bezos’ money is coming from but none of this is helping the workers. The richest man on the planet treating his workers like absolute garbage.

Mike Papantonio: Yeah, yeah. And what’s interesting, these flying monkeys, I like to call them flying monkeys that appear talking up Bezos, he calls them his ambassadors. Really, what they are … He says this, he says, “No, these are people that came from these warehouses. They’ve worked in the warehouses.” As if it’s some kind of cult, he says, “They’re almost like Moonies”. When you listen to what they have to say, you wonder whether they’re suffering from Stockholm Syndrome, that’s how crazy it is.