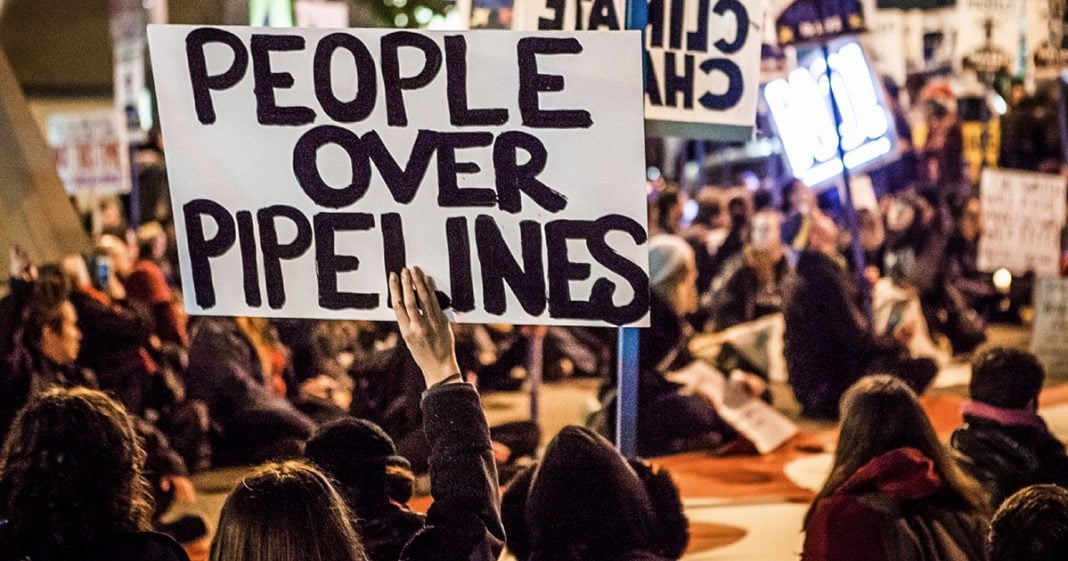 According to documents released by the ACLU, the federal government is planning a spy operation on environmental activists who will be protesting the Keystone XL pipeline at an upcoming event. This kind of action is not unheard of, especially in the environmental movement, but it begs the question as to why the government feels so threatened by people who want to protect the planet. Ring of Fire’s Farron Cousins discusses this.

On Wednesday of this week, the ACLU released documents that they had obtained showing that the federal government is planning to use “anti-terrorism tactics” to confront the upcoming Keystone XL protests and the environmental activists and Native people that will be attending those protests. These documents from the federal government clearly show that the government believes that people who care about the environment are no different than any of the people who wanna go, I don’t know, suicide bomb a building or plant IEDs on a roadside to kill civilians, because they’re using the same anti-terrorism tactics and spying techniques on these protestors that they would be using in a hostile country.

Now, the reason the ACLU is so involved in this is because they understand the abuses that took place with the protestors at Standing Rock. You know, dousing them with freezing cold water in freezing cold temperatures, trying to infiltrate the group, sending in little spies, and other very harsh, brutal, basically, violent tactics at the hands of the private defense contractors there, as well as US law enforcement agencies. They’re trying to prevent another one of those with these protestors for this upcoming protest.

But why does the federal government think that environmental activists, protestors, people who wanna protect the land, soil, air, and water, why are they classified in the same kind of anti-terrorism tactic as we would an enemy combatant? That’s what doesn’t make any sense to me about this. But our federal government cares so much about corporations and making profits and being able to place these pipelines that they are willing to treat their own citizens as if they were mass murderers in order to let these companies come in, take all our natural resources, pollute everything possible, and make a few bucks here and there because occasionally, some of those dollars make their way back to Republican candidates, sometimes Democratic candidates.

They fund our politics and that’s why they’re willing to do this. But the tactics that we saw at Standing Rock were absolutely disgusting and inhumane. According to these documents obtained from the ACLU, we have no reason to expect that these Keystone XL protestors are not going to be facing the exact same scenario. Anybody watching this who’s planning on going to these protests, beware. Don’t let them back you down. Stand your ground, but just be prepared because they are going to treat you like absolute scum of the earth just because you have the courage and tenacity to stand up against this ridiculous pipeline that will do nothing to help the United States. But even if it would, it is nowhere near being worth the risks.

The government thinks that these people who wanna protect our planet are the enemy. But really, it’s the corporations, these companies, TransCanada, Exxon, Chevron, Shell, BP, all of these oil companies, they’re the ones who are destroying this country and this planet, but they’ve paid off the right people in DC. They’ve given them enough money to convince them that they’re the good guys and the protestors are the bad guys.