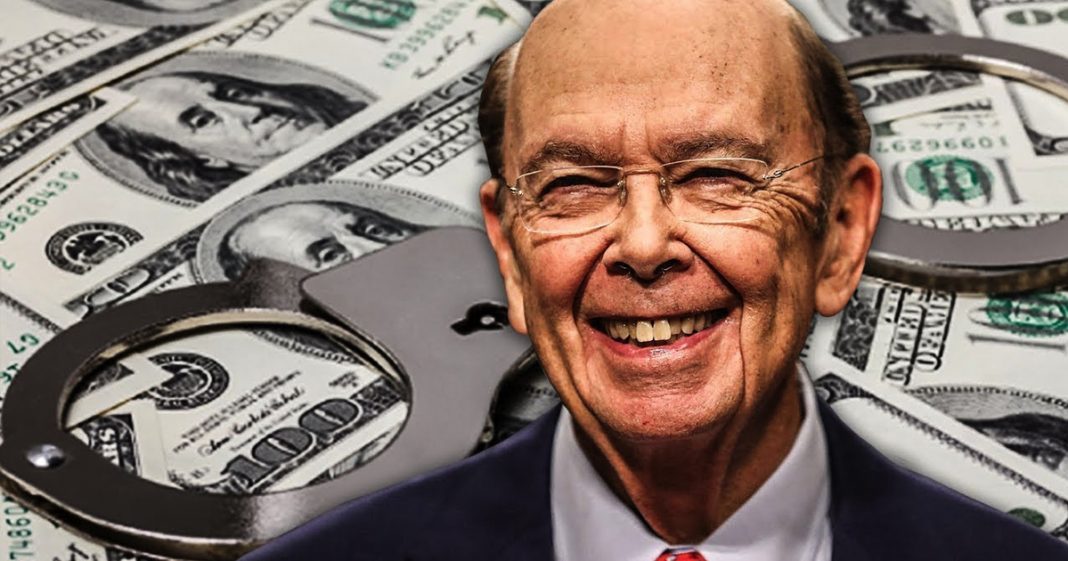 It’s no secret that Donald Trump’s entire cabinet, his administration, the agency heads that he’s put in place, they all reek of corruption. Wilbur Ross is no exception. Ring of Fire’s Farron Cousins discuss this issue.

Hi, I’m Farron Cousins, and this is “Ring of Fire”. You know, it’s no secret that Donald Trump’s entire cabinet, his administration, the agency heads that he’s put in place, they all reek of corruption, but so far most of that coverage of the corruption has focused on Scott Pruitt, who’s since resigned, Tom Price, who had since resigned, Ryan Zinke, Betsy DeVos, Ben Carson, all of whom are actually currently under different investigations at the moment for their corruption. One person that’s actually managed to kind of skate by is Wilbur Ross, the Commerce Secretary that Donald Trump put in power.

Wilbur Ross himself is actually a billionaire, much like Betsy DeVos. Just like Betsy DeVos, his entire career with the Trump Administration has been riddled with conflicts of interest, most of which border on illegal. According to a new complaint filed by the Campaign Legal Center this week, Wilbur Ross has been using his office and his power within the Federal Government to basically advise himself on stock trades, which is a massive conflict of interest that, yes, is 100% illegal.

Here’s what the Campaign Legal Center has to say. First and foremost, Wilbur Ross promised upon taking office that he was going to divest from all of his personal finances. He wasn’t going to be involved with it. He had no say over any of it. He was just going to do his job at the Commerce Department. His stocks were going to do their own thing with whoever he trusts them with. That didn’t happen. He did not divest. There’s no evidence to suggest he divest, and furthermore there’s actually plenty of evidence to suggest that he did not in fact divest from any of his financial holdings.

Again, this man is a billionaire, a billionaire. More money than he knows what to do with, but like so many other billionaires in this country, it’s never enough. According the complaint by Campaign Legal Center, Wilbur Ross has on multiple different occasions shorted his own stocks that he owns, sells them for less than they’re worth, in order to dump them, usually a day or two before massive news comes out that would end up hurting those stocks. Specially, the stocks they name are Air Lease, Sun Bancorp, and a major holding a Chinese steel company that obviously was effected greatly by Donald Trump’s tariffs. He dumped those stocks with insider knowledge so that he didn’t lose money.

You know, if that sounds familiar, it should, because that is literally the exact same thing that Chris Collins got popped for last week, arrested for, when he held stock in a pharmaceutical company. He knew that the FDA did not approve their latest drug and that it would hurt the stocks, so he called his son told him to dump the stock the day before the announcement was made. They ended up not losing $750,000 that everybody else lost basically because the stock fell I think 90%.

Nonetheless, Wilbur Ross is doing the same thing on a fairly regular basis as the Secretary of Commerce here in the United States. While the Campaign Legal Center is not suing him per se for these conflicts of interest, they’re calling on the Inspector General’s Office at the Commerce Department to investigate him to figure this out, to find out if this man is in fact using his office to either make himself richer or avoid major financial losses. Both of those are completely illegal, but according to the evidence it looks pretty much like we can guarantee Wilbur Ross has been doing this since he came into power.

It’s not just the Commerce Secretary. It’s not just the staffers. Let’s not forget how corrupt and incompetent Donald Trump himself is. A few days ago, he was in New York, and he was stumping for republican representative Claudia Tenney. During his little stump speech, he kind of went on a tangent a bit about taxes in New York State. New York State, yes, they have some of the highest taxes in this country. A lot of that has to do with the massive property taxes that people pay, because they also have a disproportionate number of millionaires and multimillion dollar properties that, yeah, cost a lot of money in taxes. During his little spiel about taxes, he told the people gathered at this little stump speech that they could possibly be paying zero dollars in taxes if only Governor Cuomo hadn’t banned fracking in the state in 2015. It’s because of that ban on fracking, according to Donald Trump, that New Yorkers are paying such high tax rates.

I’m going to read you his exact quote here, and I have to skip a lot in the middle because he goes on these really ridiculous tangents that make no sense. Forgive me if this sounds weird, but these are Donald Trump’s exact words during that stump speech. “They would’ve allowed a little bit of fracking and taking some of the richness out of the land, which by the way is being sucked away by other states, you know they don’t have state lines under ground, you know what that means …” Skipping a bunch ahead here, because he’s already getting weird. “And all of the sudden some day you’re not going to have that underground maybe so much, and it’s a shame, because you could have had no taxes. You could’ve had the lowest taxes instead of the highest taxes, and it’s very sad to see what happened with New York.”

Okay, again, aside from all of the weird half sentence new thought type things he has here, Donald Trump believes that if New York State had allowed fracking, people there could be paying zero taxes, which is weird because all of the other areas of the country where there is fracking, there’s still taxes. In areas where there’s massive oil drilling, there are still taxes. In places like West Virginia and Kentucky where there’s lots of coal mines, there are still taxes. Fossil fuel extraction and development has nothing to do with what you pay for a state tax.

I mean, if anything, you lose tax money when you bring those industries in there because they get federal government subsidies. They get tax breaks on the land that they drill on. They get tax breaks for the equipment that they use because they claim too much depreciation, and we subsidize that to make up for it. They pollute the air, the water, the land, everything, causing more sick days for American workers that reduces productivity, causing more people to have to go to the hospital. If they don’t have insurance or the deductible’s too high, those bills may not be paid, which means the tax payers have to foot those bills, and so on and so forth.

Donald Trump is being 100% dishonest with his assessment on fracking and taxes. There is no relationship between the two. What there is apparently a relationship between is Donald Trump and the fossil fuel industry if he is willing to go out there lying through his teeth about what fracking really does to a community. I doesn’t eliminate your taxes. It just makes everybody a lot more prone and vulnerable I should say to the toxins that the fracking industry is putting in our land and water.