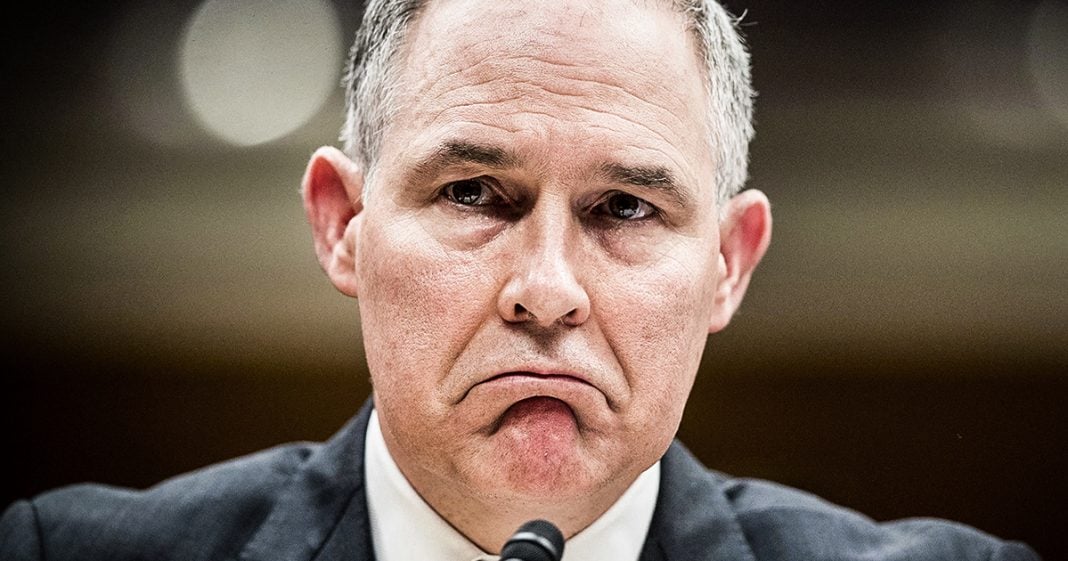 While he may have only been with the Trump administration for 18 months, there’s little doubt that Scott Pruitt will go down as the worst leader that the EPA has ever had. In addition to rolling back basic protections for American citizens, we’re now learning that his private security costs exceeded $3 million during his short tenure – a bill that American taxpayers had to pay. Ring of Fire’s Farron Cousins discusses this.

It’s been two months since Scott Pruitt resigned as the director of the Environmental Protection Agency, but even though he’s gone, his scandals have not been forgotten. Well, they’ve been forgotten by most of the media, but they actually haven’t been forgotten by the agencies that are in charge of investigating them.

It gets so much worse, though. $106,000 of that was for unauthorized overtime because Scott Pruitt made these people work so many hours that most of them were getting overtime, which has to be approved when you work for the federal government. He didn’t do that, which is a violation of the rules, so we ended up paying well over $100,000 for these people’s overtime.

He also spent more than $40,000 on a bullet-proof desk for his office. A bullet-proof desk for his office, because this man was so insanely paranoid. And remember, it’s because he was so paranoid and scared of regular people that he had to fly first class, because he couldn’t be seen with the riffraff, they want to go after him because he’s repealing all the rules that actually protect these people from air pollution and water pollution.

Scott Pruitt, though he only served 18 months, is gonna go down as one of the worst, the worst, absolutely the worst EPA administrator in the history of the EPA. And here’s why, because it’s not just about all the scandals, which by the way he’s still currently being investigated by 12 different organizations within the federal government for violations of the rules. He is not off Scott free right now. He could still very easily be popped for any of these, and they could be referred for prosecution later on. So Scott Pruitt should be living in fear, but not of the people he screwed over, of the investigators coming after him.

But again, that’s only half of it. During his tenure, in addition to all of these scandals, this man enacted one of the most pro-corporate anti-consumer environmental policies that this country has ever seen. You know, we thought it was bad during the Bush administration, but then Pruitt came along and made it so much worse.

We’re looking at more than 10,000 additional United States deaths every year because of policies that Pruitt put in motion while he was still in office. That is gonna be his legacy. The scandals may have taken him down, but the people that are gonna die from the increased pollution in the United States, those deaths are 100% Scott Pruitt’s fault, and that should forever be his legacy.