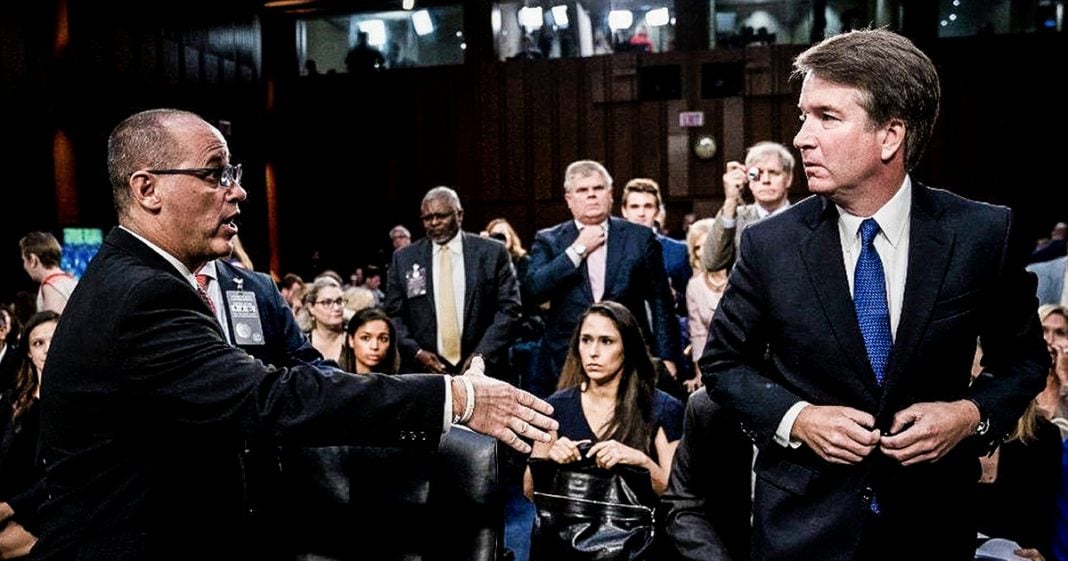 At a break during his confirmation hearing on Tuesday, SCOTUS nominee Brett Kavanaugh was approached by Fred Guttenberg, the father of a child that was murdered at Marjorie Stoneman Douglas High School. Kavanaugh refused to even shake Guttenberg’s hand and just turned his back and walked away. This kind of behavior is not acceptable and should disqualify Kavanaugh from his appointment, as Ring of Fire’s Farron Cousins explains.

Yesterday was day one of the confirmation hearings for Brett Kavanaugh, the man that Donald Trump has nominated to replace Justice Kennedy on the United States Supreme Court. And obviously, there were a lot of Democrats standing up against Kavanaugh. They were unhappy with the way Republicans have handled the entire situation, doing a massive document dump Monday night of hundreds of thousands of pages of documents, where it would actually take, I think they would have to read over 700 pages per minute just in order to have read them before the hearing started yesterday.

But all of that is beside the point. I’m very proud of how the Democrats handled themselves. They stood up against Kavanaugh, against the Republican Party, who wouldn’t even given Merrick Garland a hearing and now Republicans are crying about Democrats destroying the norms. No, you guys holding a Supreme Court seat hostage? That was destroying the norms, so you don’t have any room to talk about anything any more.

But the Democrats did what they should have; they stood up. They did not let Kavanaugh get away with anything. But that’s not what this is about. What this is about is one exchange during that confirmation hearing that I personally believe should immediately disqualify Kavanaugh from consideration.

And that is the exchange that took place between Kavanaugh and Fred Gutenberg, a man whose 14 year old daughter Jamie was killed at Marjory Stoneman Douglas High School in Parkland, Florida back in February. You can see in the video, Gutenberg walks up to Kavanaugh, extends his hand, introduces himself. Says who he is, why he’s there. Kavanaugh looks at it, turns around and walks out.

He wouldn’t even acknowledge the man. Wouldn’t nod at him. Wouldn’t smile. Wouldn’t shake his hand. Wouldn’t do anything to acknowledge the fact that this man’s child, like so many other people’s children in this country, died at the hands of a madman who got weapons that they shouldn’t even have had in the first place. Kavanaugh’s action here was absolutely disgusting.

You know, when Hillary Clinton mentioned the deplorables, the basket of deplorables? It’s people like Kavanaugh that she’s referring to. And that is correct. That is what Kavanaugh is.

What’s even worse is that after this exchange took place and that video started going around, everybody could see clearly what happened, White House deputy press secretary Ross Shaw issued a statement that said, an unnamed man came up, an “unidentified individual” is what he called him, came up to Kavanaugh and said something, but before Kavanaugh could respond, security ushered him away.

We can see the video. The video’s everywhere. That is not even close to what happened. Ross Shaw, White House deputy press secretary, is telling all of us that what we can see with our own eyes is not what actually happened, which is actually Donald Trump said in a recent rally. What we’re seeing is not what’s happening. And now the White House has basically adopted that as their position to help explain away things that are really, really bad for them.