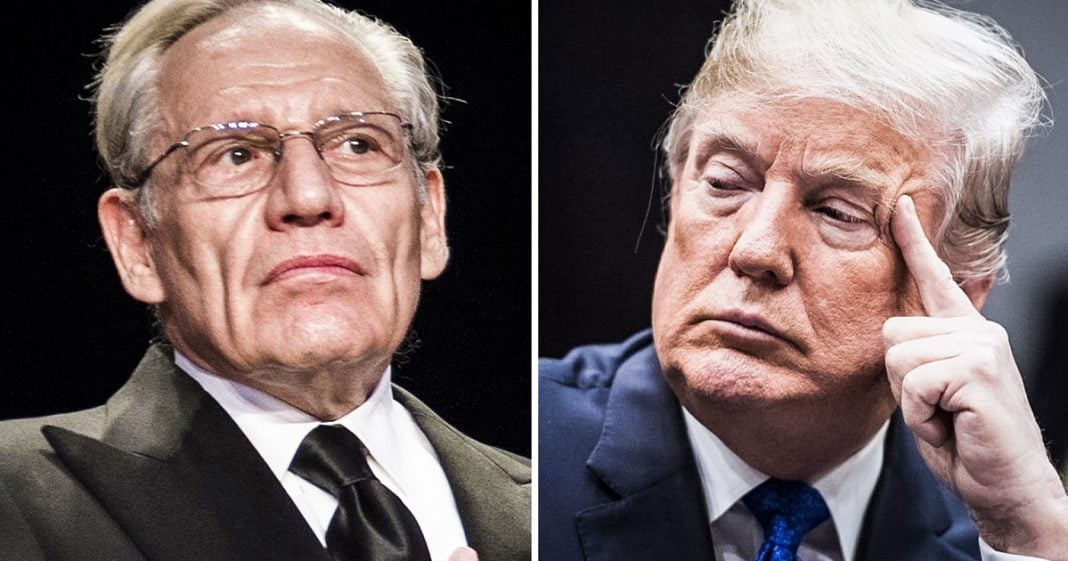 Legendary journalist Bob Woodward has a new book out this week, and the excerpts that have hit online paint a very clear picture of just how insane the Trump White House truly is. Between calling for an all-out massacre of the leaders of a foreign country and mocking Jeff Sessions as a “dumb southerner”, Trump has become even more unhinged than most of us could even imagine. Ring of Fire’s Farron Cousins discusses this.

Legendary journalist Bob Woodward has a new book out this week called, Fear Trump In The White House. He makes some pretty outrageous claims in this book, that Donald Trump and other members of the administration had been trying to fight back for the last 24 hours. Here are some of the most insane things that Woodward claims have happened inside the Donald Trump White House. These are all contained in the new book.

First and foremost, you have John Kelly, who allegedly said, “He’s an idiot. It’s pointless to try to convince him of anything. He’s gone off the rails. We’re in crazy town. I don’t even know why any of us are here. This is the worst job I’ve ever had.” John, I know you came out and you issued a statement and you said, “I never called Donald Trump an idiot.” You didn’t actually address any of the other claims in the book. You just said you didn’t call him an idiot.

If this really is the worst job you’ve ever had, which we can all pretty much tell it is from your constant expression, you can leave. There is literally nothing keeping you in this White House. You are more than welcome to submit a letter of resignation, walk out right now, and be done with it, have it all behind you. Instead, you’re choosing to stay with Donald Trump, destroying whatever reputation you may have had, and damaging your personal legacy. That’s what you’re doing by staying with this madman inside the White House.

There’s also more here. Donald Trump, speaking of a Syrian president, Bashar al-Assad said the following. You gotta forgive me here. I’m reading the exact quote. There’s gonna be some language here. This is what Donald Trump said about Syrian president, Bashar al-Assad. “Let’s fucking kill him. Let’s go in. Let’s kill the fucking lot of them. You should be killing guys. You don’t need a strategy to kill people.” The tail end of that quote there.

Here’s another thing. This is from former Trump lawyer, John Dowd, who actually resigned this past March. This is what he told … This is in a transcript said, “I told you he was an idiot. I told you he was goddamn dumbbell. What are you dealing with this idiot for?” Then, Dowd said to trump directly, “Don’t testify. It’s either that or an orange jumpsuit,” obviously referring to special prosecutor Robert Muller’s investigation. Dowd did not want Trump to go and testify. Back in March when Trump said, “Yeah, I’d love to sit down to testify,” Dowd resigned, cause he understands if that happens, Trump is definitely going down.

Those are some of, the crazier things. I haven’t gotten to the absolute craziest yet. These actually give us a very clear picture about the dysfunction inside the White House. This last one, just shows how mean and crazy Donald Trump truly is. Here it is. This is what he said about Attorney General, Jeff Sessions. Keep in mind, pardon the language, but these are the exact quote from the book. “Donald Trump. This guy is mentally retarded. He’s this dumb southerner. He couldn’t even be a one person country lawyer, down in Alabama.”

Trump this morning actually came out and said, “I never said that. I love the south. You know, they’re a great people down there.” He understands the damage that this kind of comment could do, especially considering that most of the folks down here in the south, those are his base. Right? These people, the ones that I unfortunately have to see on a daily basis, driving around town, they all have the MAGA bumper stickers on the car. They have their MAGA hats. These are the people with those horrible southern accents, that Donald Trump hates, that helped elevate him into office.

Overall, this book by Woodward certainly has enough credibility. Woodward obviously is part of the duo that helped bring down the Nixon administration. He has been a phenomenal journalist, even before that, and of course obviously, after that. He also has tapes. He went through hundreds of hours of conversations with senior members of the White House to gather this information and put it in the book. We have no reason to distrust what Bob Woodward is saying here. To me, that’s the scariest part. It means that there’s a very strong likelihood that everything that Woodward says in this book is 100% true. If that’s the case, then we’re way past, time for the 25th amendment.