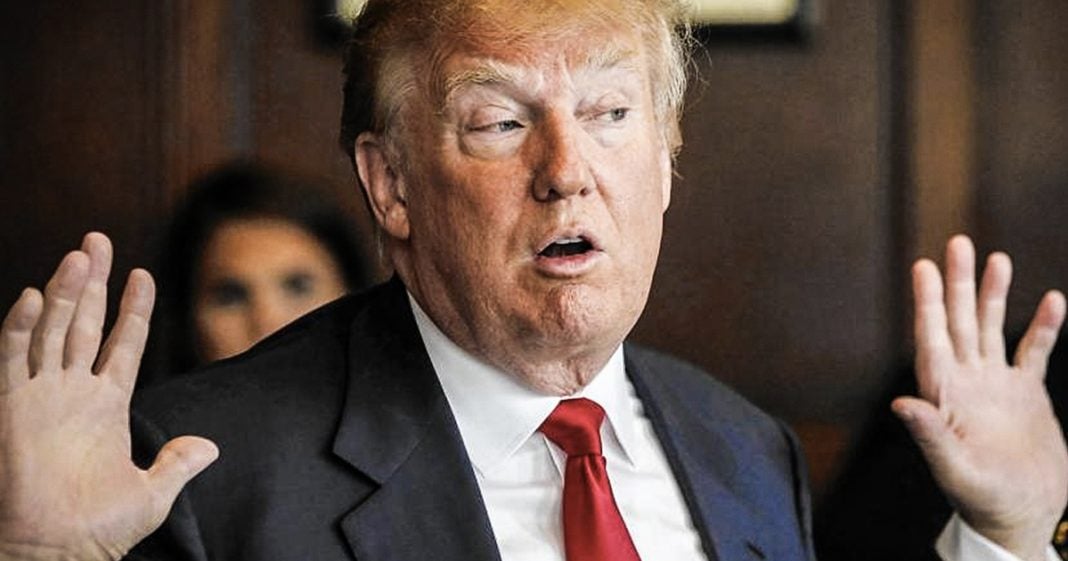 Donald Trump seems exceptionally annoyed by the Robert Mueller investigation, but he’s been awfully quiet about all of the other investigations that are threatening to take down his presidency. Between lawsuits over Constitutional violations of the Emoluments Clause, the New York charity fraud investigation, and the various investigations into his business practices, the President could be completely cleared by Mueller but still end up getting impeached for other crimes. Ring of Fire’s Farron Cousins discusses this.

Donald Trump loves to tell us that the entire Mueller investigation is a witch hunt, and that’s not news. He’s been doing that for quite some time now. What is odd is the fact that he only chooses to focus on that one particular investigation when in reality there are at least six total investigations into the actions of Donald Trump. Any one of which could bring an end to his presidency.

Here they are and, of course, we have to start, obviously, number one is the Mueller investigation into possible collusion, conspiracy, whatever is your word of choice there because I know collusion isn’t mentioned in a law, but conspiracy is, so yeah there’s that one, and we know how he feels about that one. There is also the US Attorney for the southern district of New York, Jeffrey Urban is probing Michael Cohen for tax evasion fraud campaign finance violations of which Donald Trump is also a part of that as a client of Cohen and someone that Cohen may have done these things on behalf of. According to Cohen, he did do them on behalf of Trump, that’s investigation number two.

Here’s investigation number three, New York Attorney General is investigating the Trump Foundation, Trump campaign, and Michael Cohen for campaign finance laws and fraud. That’s a big one. The Trump Foundation, the misuse of those charitable funds to benefit the campaign, and to do other things for Donald Trump like pay off some lawsuits that he had pending, that’s a big deal for Trump and that’s the one that is most likely to bring down this administration, and the entire Trump family because you have Donald Junior, Eric, and Ivanka also wrapped up into that one.

Number four, New York Attorney General Barbara Underwood, and New York State Department of Taxation and Finance are investigating Michael Cohen for tax fraud as well. Similar to the other one, however, a separate investigation this time on the state level also involving Donald Trump.

Number five, Maryland Attorney General and District of Columbia Attorney General sue Trump for emoluments clause violations. This is another big one that has not gotten the kind of coverage that the other investigations have. This one is about Donald Trump receiving money from foreign dignitaries who come to DC and stay on Trump owned properties. As President of the United States, he is constitutionally forbidden from taking any kind of emolument, gift, money, whatever from any foreign dignitary. As he still owns his stake in Trump properties, and these dignitaries have to pay money to stay there, and Trump gets the profits from that, that is very clearly an emolument he is receiving from those dignitaries, or world leaders, or whoever it happens to be. 100% unconstitutional, and hasn’t gotten near as much play as some of the other investigations.

Bringing it home now, investigation number six. Manhattan District Attorney Cyrus Vance has a potential investigation into Trump Organization for fraud. One of the newest ones going on, of course, we know that there’s been immunity granted to several people involved in the Trump Organization trying to find out where they’ve been getting money, where they’ve been sending money, and what’s going on with all that because they believe some kind of fraud is taking place.

Those are the top six investigations into Donald Trump, six different independent investigations and, of course, none of this even begins to touch all of the women who have accused the president of sexual misconduct. Of course, there is the liable lawsuit by a former Apprentice contestant Summer Zervos for Donald Trump calling her a liar after she accused him of the misconduct.