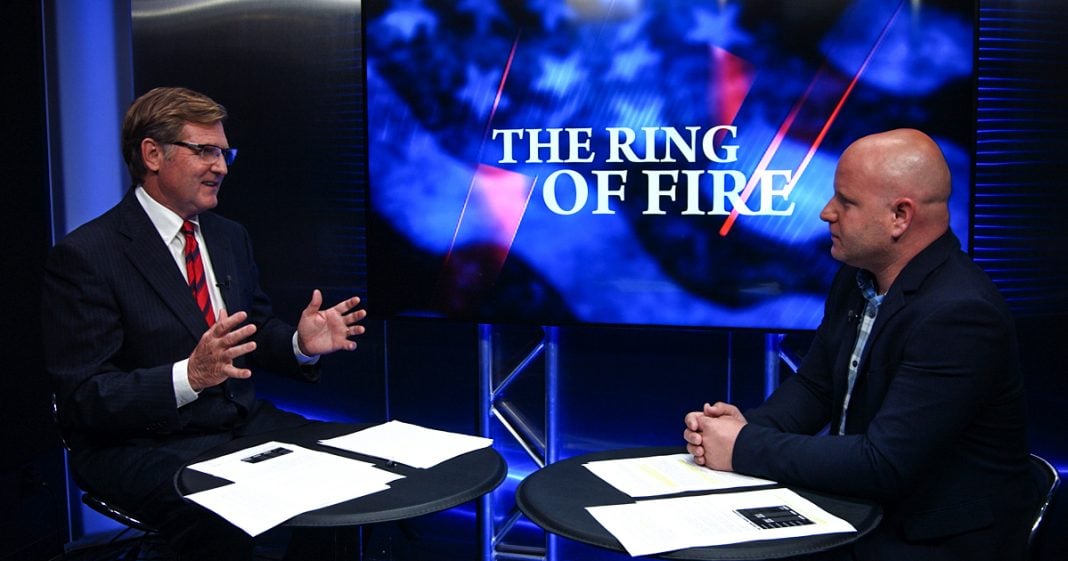 Recently, a judge ruled that Starbucks had to start paying their employees for all of the work they do. Ring of Fire’s Mike Papantonio and Farron Cousins discuss this issue.

To learn more about this topic, visit AL.law.

Mike Papantonio: Recently, a judge ruled that Starbucks had to start paying their employees for all of the work they do. That seems pretty logical, doesn’t it? Starbucks can’t require employees, for example, to work off the clock. This scam, working off the clock, you know, it just is endless. We see it with Walmart. We see with all the big box stores, and it’s just stealing. It’s theft. Your time as a worker has a value, so I’m going to steal from you in asking you to do stuff without being paid. Now, you take that, and you take it over thousands of people, and at the end of the year you’ve made tens and hundreds of millions of dollars by stealing from your workers. Now here you’ve got Starbucks. I don’t know what it is about Starbucks. I don’t know. People go to Starbucks, and they get to work their computer because they got an internet service.

The PR has got this brand and this image that, “We’re Starbucks. We do it right. You don’t have to worry about us. We’re going to be above board.” They’re criminals. I mean, this is criminal conduct. There is no question to me. Now, with under the legislature, they may be able to say, “Well, it’s not technically criminal.” I think it could be articulated. It’s technically, but I’ve handled these cases just so you know. I handled the one against Walmart, was one of the biggest actually pay theft cases in the country. So, I’m real familiar with what they’re doing here. Time is money, and they’re trying to steal money from workers.

Farron Cousins: Well, I think that’s the best way to put it. You know, when you have a couple of thousand stores throughout the country, but you only ask two or three people every day at the end of their shift. They’ve already clocked out. They’re about to go home. “Hey, by the way, can you go empty the trash cans real quick? Just real quick. It’s 10 minutes.” So, you’re stealing 30 minutes a day from three different people, but you’re doing it at a thousand stores, or two thousand stores, in the case of fast food restaurants who are also horrible with this.

This is the number one form of wage theft in the United States, and of course, the average person isn’t going to say, “Well, they took 30 minutes of my life this month. There’s not much I can do about it.” But, there is. There’s some big class actions about all this going on, and if you’ve found yourself in that situation, you need to report it. You need to look into who is handling these major cases. If you’ve got documentation, if you’ve got video tape or recordings, keep those, hang onto them, because this is important.

Mike Papantonio: Let me tell you how this got started. In 1961 or thereabouts, maybe a little bit later, the courts came up with this concept called the de minimis time, and that is, they say, “Well, sometimes it’s okay for an employer to do this, but it should be kept at an absolute minimum.” Okay? It’s called the de minimis doctrine. I think that’s the way it’s referred to. So, the de minimis doctrine says, “Yeah, you can do this a little bit. You can fudge a little bit, but you can’t do it a lot.” Starbucks is doing it a lot, just like Walmart did a lot. Just like all these big box stores do. Here’s what they do.

They say, “John, or Mary, you’re really doing well here. I really think there’s a management position for you here if you keep shining.” Well, management, keep shining means keep doing all this stuff I’m asking you to do off the clock because it makes me look better as a manager, because we’re getting all this stuff done, and you’re keeping the cost down for my store. It’s all about money. Each store manager has got to report, right? Store manager A wants to say, “Wow, look at the money I saved.” Well, yeah, he saved it on the back of his workers.

Farron Cousins: You know, it’s funny you tell that story because as you’re saying, that light bulb goes off in my head. I worked at a chain restaurant when I was in college. That exact same scenario played itself out, and it actually played itself out the same way you just said. I was a busboy. I’d finished my shift. It was the end of the night. I’d be done, and the manager and say, “Hey, I need to do inventory tonight. I really need somebody to stay here with me. Can you do this? You did a great job last time I made you stay off the clock and do this, and they really loved it, so if you could just … It would be two or three hours.” Then, at the end of it I wasn’t getting paid at all, and he’d say, “Hey, I’ll tell you what. I’ll buy you a six pack of beer.” So, they spend $4.00-

Mike Papantonio: And you worked $30 worth of work.

Farron Cousins: … right. Up until 2:00 AM in the morning. But they do it. They do it all the time. I’ve seen it myself personally. I would go into this restaurant sometimes, and they would say, “Hey, after your shift, would you mind, do you think, this would be really helpful for us? You’re doing great here. Can you go paint the hand rails outside of the restaurant?” I did that, because I thought, you know what, they love me. I’m solidifying-

Mike Papantonio: That is, actually when we looked at the Walmart case, that was the theme that came up all again. It is, “How would you like to have on your badge Assistant Manager?” “Well, okay, yeah, I’d like that.” But, the guy, the person who’s doing that to you is not telling the rest of the story. He’s not telling the story, “Hey, Farron Cousins is out there doing this stuff.” He’s saying to his manager, “I did a really good job, didn’t I? I got a lot done, and we paid minimum amount of money to do it.” That’s what we would see on the Walmart cases. Great example, because they really mastered that. They actually even gave talks on how to do that with employees. How do you get the employees to do that extra? How do you squeeze that extra dime out of them? It’s absurd, but you would see it. That was part of the playbook. That was part of the management style.

Farron Cousins: … That is crazy, and you know, people may think too, like, “Well, I didn’t mind. It was fine. I stayed 15 minutes later. I didn’t have anything going on in the rest of the day.” Or the manager could come in and say, “Hey look. You know you do this for me, I know you don’t like working nights. You’d rather work mornings. We can probably make that happen for you.” It’s all sweet talk from the manager to squeeze everything they can out of you.

Mike Papantonio: We’ve got about, we’ve got a little time. I want to go to this story. I love this story, that was an official that was charged with manslaughter because of the deaths that took place in the Flint water crisis. It’s about time. Okay? Why is it that we never … This is manslaughter, man. Why is it we always treat it different when it’s a corporation? Take it from there. This is a very important move up there.

Farron Cousins: Right. State Health Director Nick Lyon charged with two counts of manslaughter for hiding the Legionellae bacteria that was in the water. Did not tell the public for 10 months after they discovered it. So, Nick Lyon has become the fall guy. But they should squeeze him and make him squeal, and whatever he has on everybody, all throughout that Michigan government.

Farron Cousins: Yeah. That knew about it and did nothing? Give them all the info. Let’s get more charges filed against these criminals.

Mike Papantonio: This is a really good start, because the only way you really change it is not by fining them. These people. You think Rick Snyder cares about bad publicity? This guy has built his entire political career with bad publicity. You just got to say sometimes, “This A should not be the fall guy. He’s only a small cog in the works.” Perp walk the rest of them, and you’ll see that this kind of conduct actually changes after a while.