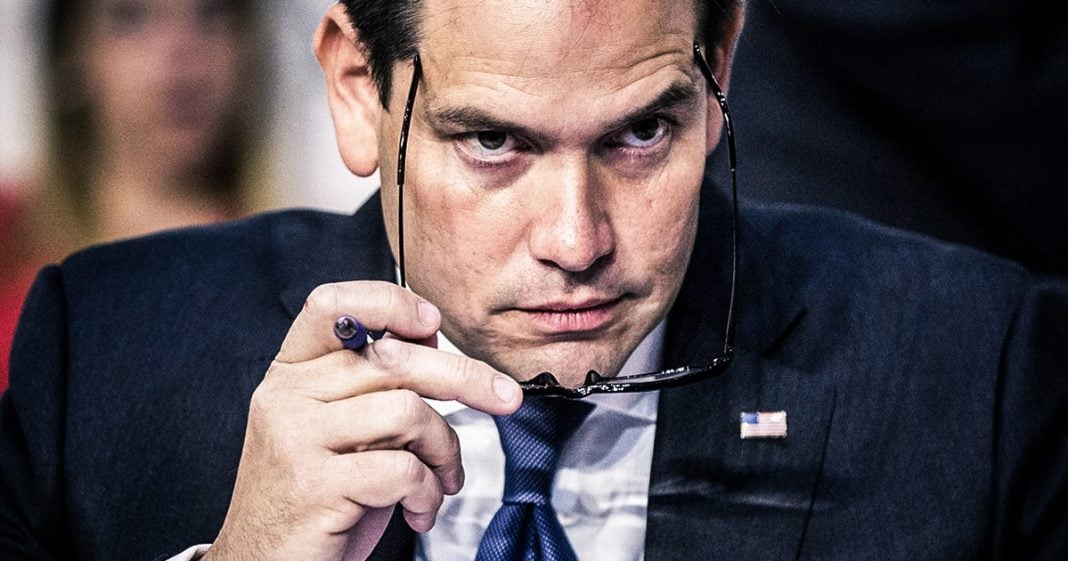 Republican Senator Marco Rubio is not a fan of the upcoming Ryan Gosling movie “First Man” and he made his views very clear in a recent angry tweet. Rubio was triggered by the fact that the movie isn’t going to show a scene of Neil Armstrong putting the American flag on the moon. If this is Rubio’s biggest problem with this country than he truly is a lucky man, as Ring of Fire’s Farron Cousins explains.

Republican Senator Marco Rubio is not looking forward to the upcoming Ryan Gosling movie First Man, which is a biopic about Neil Armstrong. The reason Marco Rubio is not looking forward to getting advance tickets to this movie is because apparently the producers and director of this movie decided to cut out a scene in which Neil Armstrong plants the American flag on the Moon.

Here is what Marco Rubio said on Twitter when he learned that this scene would not be in the movie. “This is total lunacy and a disservice at a time when our people need reminders of what we can achieve when we work together. The American people paid for that mission on rockets built by Americans, with American technology and carrying American astronauts. It wasn’t a UN mission.”

Rather than getting into the fact that this was actually, yeah, a collaboration of scientists from many different countries who came to the U.S. to help us develop this technology, so yeah, you’re pretty much already wrong about everything there, Mr. Rubio, but is this honestly the biggest thing you have to worry about right now? Getting pissed off about a Ryan Gosling movie just because it doesn’t show one scene that you happen to like? There’s still American flags all throughout the movie.

I know Dinesh D’Souza went on Fox News to say that they’re not even showing the American flags on the astronauts’ uniforms, even though shots from the movie clearly show American flags on the astronauts’ uniforms. Fox News is melting down about this. They have been running segments on it about how horrible it is, but again, this just goes back to the fact that Republicans have absolutely nothing to talk about. They are trying to wrap themselves in the American flag so that they can seem like they care about this country at a time when everything else around them is burning down.

They have a president, a member of their own party, who has been accused of conspiracy against the United States. That’s what the entire Mueller investigation is about. Whether or not it’s true, we’ll find out later, but he’s been accused of it, and he’s being investigated for it. Then you have the fact that Marco Rubio has done absolutely nothing about all of the many, many, many mass shootings we’ve had here in the state of Florida. Thoughts and prayers for those, but Ryan Gosling not putting an American flag on the Moon? Holy cow. Hold onto your shorts. Here comes Marco Rubio on Twitter, super pissed off, as if, I don’t know, a dozen kids just got murdered in a high school, except he doesn’t get pissed off at that. He gets pissed off at Hollywood.

Hollywood is basically the only bogeyman that the Republican Party has left at this point. It’s just a bunch of elitist leftists out there with their socialism propaganda, trying to cut out a vital part of American history. Really? I don’t think there’s anybody in this country that doesn’t understand what a great accomplishment this was for the country, but again, we also had scientists from other countries helping us out, okay? We recruited them. We brought them in. We needed their advice, and their intelligence, and their technology. The Americans did it, but we did it with help, just like we’ve done so many other times. That’s not trying to undermine what we accomplished with the Moon landing. It’s just trying to be based in reality, something that Marco Rubio waved goodbye to long ago.