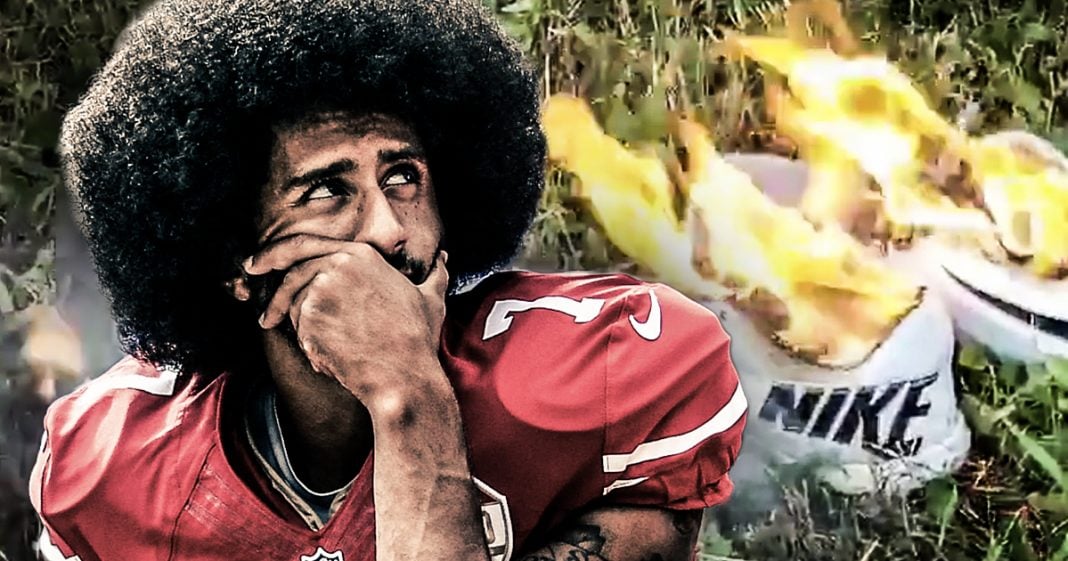 Believe in something, even if it means sacrificing everything – That’s the message featured on a new Nike ad featuring Colin Kaepernick. And, as expected, conservatives are absolutely freaking out. Videos began emerging late Monday and early Tuesday of angry right wingers burning their Nike shoes and cutting up their other Nike apparel. Ring of Fire’s Farron Cousins discusses this.

Believe in something, even if it means sacrificing everything. That’s the message of a new Nike ad featuring Colin Kaepernick. Now, Kaepernick, as everybody knows has basically been blacklisted from the NFL after starting the protest during the national anthem to protest the ongoing police violence against African-Americans in this country. Now, in response to this new ad and the fact that Nike is paying Colin Kaepernick to be in these ads, conservatives have predictably lost their collective minds once again. And just like they did with their Yeti coolers and their Keurig coffee machines, they’re now destroying their Nike apparel, I guess in an attempt to own the Libs maybe to get back at Kaepernick, I don’t know what it is but they’re out there posting videos of themselves, pictures, cutting up Nike socks, Nike shirts, burning their Nike shoes that probably cost them $100 or more because they think that is really going to show Nike.

Now, as I’ve pointed out in the past every time Republicans do these little freak shows that they have, you already own the product, they have your money, going out there and burning it isn’t going to hurt them, it’s going to hurt you. To be honest, I’m surprised that most of these conservatives had enough sense to take the shoes off before they burned them given the level of intellectual thinking we’ve seen from them. I wouldn’t be surprised if they said, “Well, to hell with this Nike shirt”. Anyway, this is absolutely ridiculous what these conservatives are doing right now. Fox News spent Monday evening, Tucker Carlson, talking about this as if it were the biggest thing in the world to happen and how horrible it is that Colin Kaepernick is out there getting sponsored, getting these ads, from Nike. Fox and Friends, this morning, talked about four different times during their program. They had four different segments talking about this. They’re trying to misconstrue it, as they have been since the beginning, saying this is protesting the national anthem. That is not what this was ever about but it’s a good distraction for them.

It’s a good distraction for the party that has absolutely nothing to run on, absolutely nothing to talk about and certainly nothing to brag about. They have a president whose under multiple different investigations, they have a Republican party that’s facing a massacre in the upcoming midterm elections. Yes, the economy is booming but those tax cuts aren’t going to the middle class and the under class and everybody knows it now, so you can’t talk about those anymore. So what are you going to do? You’re going to try to ramp up this faux patriotism and say that Colin Kaepernick is not American, that he’s not a good person when he is actually taking a stand by taking a knee for one of the most important issues in this country. He is exercising his constitutional rights to bring attention to the issue of police brutality. That is about as American as you can get and yet Republicans want to paint him as some kind of non-patriotic cry baby when in reality, the folks out there burning their shoes and cutting up their Nike gear … those are the real cry baby snowflakes out there.