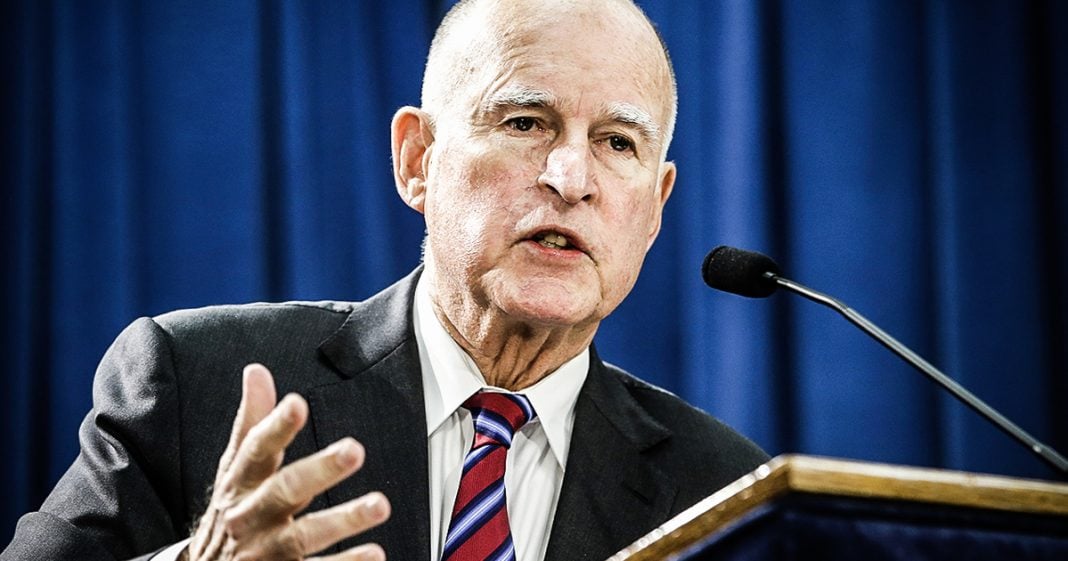 In a move that could be one of the most disgusting pieces of state-level legislation to emerge in the last few months, the state of California on Friday passed legislation that would force California utility customers to help cover the costs of wildfire fighting, cleanup, and prevention. The legislation was passed by the state legislature and now awaits Jerry Brown’s signature. Ring of Fire’s Farron Cousins discusses this.

Some bad news for residents of the State of California last week, as on Friday, the State Assembly actually voted and passed legislation, currently awaiting the signature of Governor Jerry Brown. But this legislation would actually make California utility customers responsible for the costs of wildfires in their state. Utility customers, people who pay their power bill every month, could begin seeing additional charges on those bills in order to pay for the costs of wildfires in the State of California.

Now, we already know that California had the biggest wildfire in the state’s history. That just happened. They’re still going through a drought that’s basically going on for more than six years, at this point. Climate change in absolutely ravaging the state, making these wildfires more prevalent and more likely to occur. The U.S. Department of Interior has had their budget slashed, so they can’t spend the money to go out there and clear out all of the underbrush and dead trees that need to be cleared out because that’s what helps wildfires spread. So the State of California, as liberal as it is, said, “You know what? Instead of making the utility companies pay for it, if they’re the ones whose equipment causes a fire, which is what the current law says, let’s instead protect the energy companies, protect their shareholders, and pass those costs on to the consumers.”

That is precisely what this piece of legislation is going to do. So I know Republicans love to attack California as this bastion of liberalism, the most progressive state out there, a bunch of hippie, communist, socialist whatever, but in reality, they’re politicians just like everybody else. And if they get the opportunity to screw consumers to protect corporations, by god, they’re going to do it. And that is exactly what the State Assembly voted to do in California last Friday, and it is almost a guarantee that Jerry Brown is going to sign this thing into law. So if you live in the State of California and you’re with an energy company like PG&E and their equipment blows up, starts shooting off sparks, and that causes a wildfire, well PG&E no longer has to pay for that.

Instead, you’re going to see the cost for cleaning up that wildfire, putting it out, and clearing out all of that undergrowth. That’s going to be added to your monthly utility bill. Meanwhile, the Department of Interior, who’s actually in charge of that, won’t have to deal with it. The State of California, who also bears some of the costs for that, they’re not going to have to deal with it, just the consumers. Just the average, every day, working-class people who just wanted to pay their utility bills and live a normal life and depend on these government services to protect them from wildfires.

But the government of California sent a very clear message on Friday. Not only are you on your own but you also have to pay when we have to come out and protect you, even though your tax dollars already pay for that for the state, your tax dollars pay for it for the federal government. Now, we’re going to make you pay a third time for it, because god forbid we make the utility companies clean up their own messes.