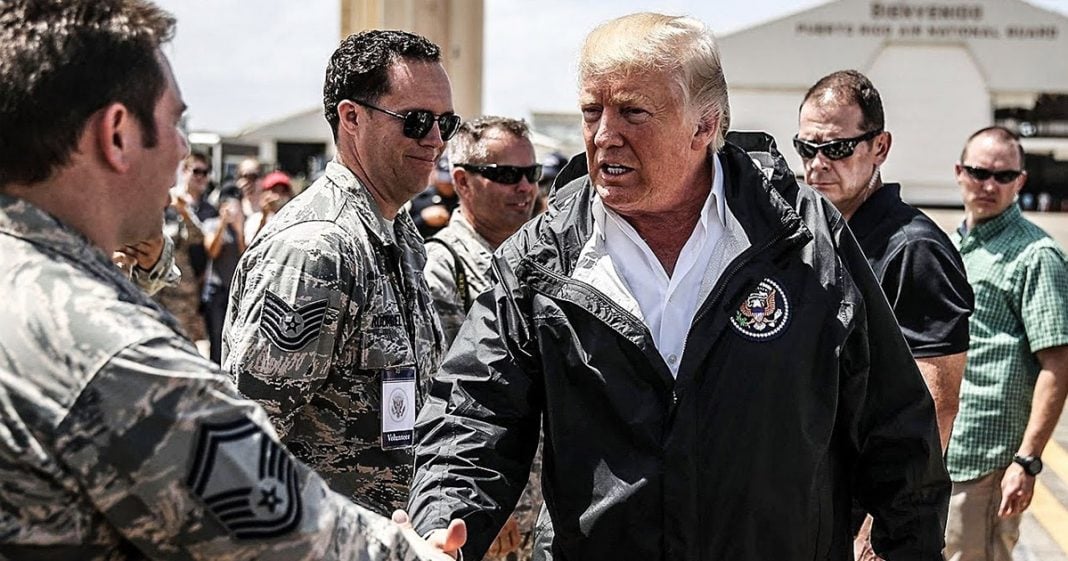 Earlier this week, a new report came out that adjusted the official death toll from Hurricane Maria in Puerto Rico. The official death toll has now jumped from 16 to 2,975. Meaning, almost as many American citizens died in Hurricane Maria in Puerto Rico as died in the 9/11 terrorist attacks. That is an increase, an increase of 4,500% over initial official estimates. 2,975 people dead.

We need to remember something here when we talk about these stories. Puerto Rico is a United States territory. The people who are residents of Puerto Rico are legal US citizens, and therefore, they are under the protection of the United States federal government which includes emergency management operations like FEMA and the National Guard. Both of those institutions including the Federal government itself, failed in the response to Hurricane Maria.

FEMA itself admitted in their own internal report, that they were grossly understaffed and unprepared for the entire 2017 hurricane season, the one that spawned Maria and Irma and Harvey. They weren’t ready for it. Not only were they, according to their own estimates about 5,000 staffers short, they also didn’t have proper evacuation plans for Puerto Rico. They relied on decades old studies that were no longer relevant whatsoever.

Then we also have the bigger problem that’s been missed in almost every single story talking about Puerto Rico, even though there haven’t been that many stories talking about Puerto Rico, and that is the role the United States banks played in helping to bankrupt the island. United States banks came into Puerto Rico many years ago and started selling government bonds. Bonds for the island of Puerto Rico. So people could invest in their own island, get a small but guaranteed return, but as it turned out, those banks ripped off the consumers.

There is massive litigation ongoing right now. Mike Papantonio, actually his law firm are handling many of these cases down there in Puerto Rico, from investors who got ripped off from these major banks, but it has starved Puerto Rico of money, and that is one of the reasons why the infrastructure was so horrible. The island had no money to fix things before the storm, and that’s what caused even more widespread damage on the island.

We have the National Guard and FEMA, both of whom as I mentioned before, were pathetic in their responses, unfortunately, but all that leadership comes from the top. These 2,975 at least deaths rest on the feet of Donald J. Trump, the President of the United States. Here’s the kicker. Remember the massive outrage from George W. Bush’s responses to Hurricane Katrina? How awful he was? You’re doing a heck of job, Brownie.

Everybody across this country was absolutely appalled at how he handled that. His approval rating tanked and it never recovered for the rest of his administration. Where’s that national outcry for Puerto Rico? Are there too many people in the United States today that don’t understand that Puerto Rico is a United States territory? That those people are US citizens, or more importantly that they’re human beings in general who we should be helping?

That’s the problem. That’s one of the biggest things that makes me angry about this, is the fact that nobody is talking about it. There is no outrage, and that US citizen or not, these are human beings who are suffering and we have the means to help them, but we are choosing not to. We are choosing to not help out our fellow citizens down there in Puerto Rico. That’s what’s happening. The government has money, okay. Don’t let them tell you it’s going broke. Yeah, we’ve got a massive deficit. We have to borrow money, but the money’s there. We could be helping these people. We could have rebuilt this entire island by now. You know, limited only by the number of contractors that we could have found.

We made this choice. We made the choice to let them die. We made the choice to just leave them there, in anguish. As a country, that is not only unforgivable, but unacceptable, and somebody, the person at the very top, needs to be held accountable for this. I know Democrats don’t want to talk about impeachment. They don’t want to run on Trump in the midterms and I agree with them for the most part on all that, but this right here, Puerto Rico, the response to that, nearly 3,000 people dead at least. Some studies actually show maybe up to 5,000 dead. This is something that they should run on.

They should run on the fact that Republican government starves the government itself of funds, via tax dollars, so that we don’t have a response. They cut the budgets for groups like FEMA, so that they cannot properly respond to these national disasters. That should be a campaign talking point, but unfortunately, I don’t see anyone out there talking about it today, even after we got this insane report showing that the death toll was over 4,000 times higher than what the government initially estimated.