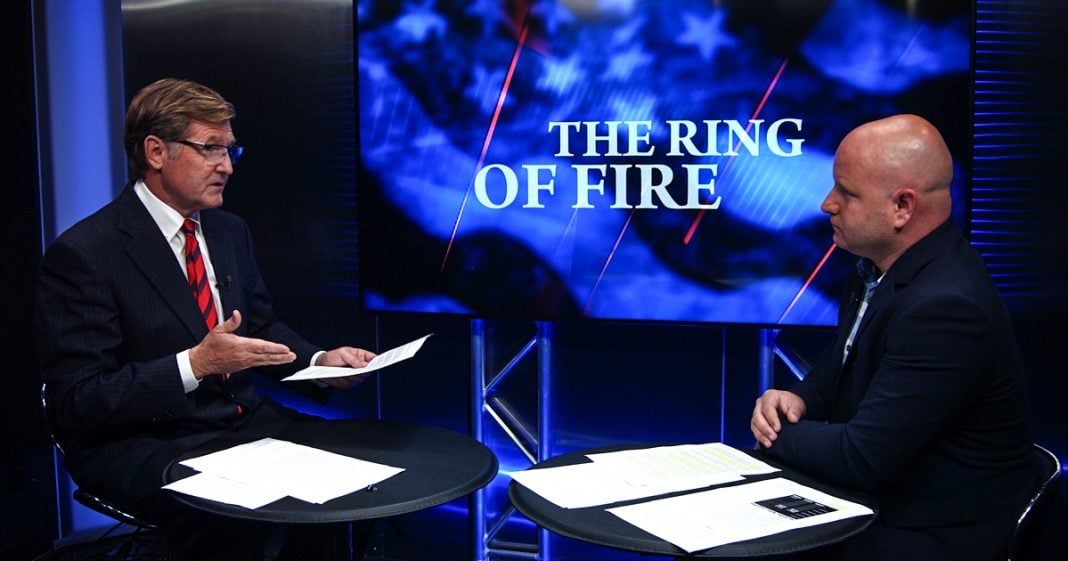 Nexium is one of the most popular heartburn medicines on the market, but new lawsuits say that it’s causing permanent damage to consumers and some people are more susceptible to it. Ring of Fire’s Mike Papantonio and Farron Cousins discuss this issue.

Mike Papantonio: Nexium is one of the most popular heartburn medicines on the market, but new lawsuits say that it’s causing permanent damage to consumers and some people are more susceptible to it. Now, obviously, let’s get right to it. There permanent damage is kidney disease, actually, kidneys actually shutting down and this, I’m very familiar with this case. We’re involved with handling this case. The ugly thing about … this is another case where the FDA … first of all let me back up.

Everybody believes, I don’t know where they get this notion, but they believe that the FDA does testing before they put it on the market. That there’s some little scientist back there that actually tests this stuff. But they don’t. The FDA does nothing except accept the word of the people that are trying to get the drug approved to be sold. So this is another case that is going to show the clinical data that they gave the FDA was phonied up. They’re going to find that … I’d say probably every time you see a pharmaceutical case where people are being injured, probably three out of five time the clinical data that the marketers use, it’s really a marketing … this isn’t about science.

This is about cash cow marketing, okay? So the typical kind of thing that we see is the scientists say, you know, you really can’t say this about the product because we don’t have enough information and the marketers say, nonsense, we’re going to say this. And this proton pump inhibitor case, with Nexium, which is there for heartburn is killing people.

Farron Cousins: I mean, outside of a Tylenol or an Ibuprofen type medicine, these are one of the most popular medications in the country. Ten years ago, however long it was when they made them to where you didn’t have to have a prescription any more, you could just get them over the counter, they became even more popular. Along that same time, back in 2014, I think it was, the FDA finally says, okay, we’re going include this warning … 2014 … that it’s probably going to ruin your kidneys, so we’ll just put that tiny little warning on the box. Everybody’ll be fine. Nexium, Prilosec, all these groups never once, you know, is this really mentioned in a commercial. At least not in a way that anybody can understand or read it on the screen.

Mike Papantonio: Yeah, it certainly doesn’t … the numbers, let me talk about numbers. According to the new testing that’s being done and the journals on nephrology, they’re finding that a person taking Prilosec or Nexium faces a 96% increased risk of kidney failure. Kidney failure. 96% increase of kidney failure. Now if you’re one of the lucky ones, you only have a 28% risk of chronic kidney disease. Now, this material is coming out of their own documents, you understand. This is the kind of material that the FDA could have found out, but the FDA … it’s the revolving door problem. I promise you we see it every case. We’re going to find out that the people who worked on this for the FDA did something, hurried it up, got something done through the FDA. They’ll be working for one of these pharmaceutical companies within a couple of years, regardless of how this comes out.

So, here’s how they make money. They know they’re making it … let’s say they’re making five billion a year off of this product. They do the math on it. The math on it is, okay, well if we’re making five billion dollars a year and we know this. Here’s a truth that other, that most people don’t know. Once a product is put on the market, it’s virtually impossible, I mean, you can get it done, but it’s very, very difficult to get that product pulled from the market. So, Nexium and Prilosec, same way. It’s out there. People are using it. The chance of getting pulled from the market are slim to none.

So, they say, we know we can make six to ten billion dollars over the next 7 or 8 years when … it’s a lot of money and we know that at the end of that, we may have to pay couple of billion dollars, but we’ve made a lot of money. That’s literally what we see in the documents. We see them making these calculations in the documents. It’s the Pinto case. You know the Pinto case.

Farron Cousins: Oh, absolutely. With these heartburn medications, the Prilosec, the Nexium, their estimated users, every single day you’re in the United States, are in the millions. Millions of people taking these medications. Be perfectly honest, I am one of them. I have chronic heartburn. I am terrified every day when I have to open up that bottle and take this.

Mike Papantonio: A, Farron, don’t do it. Okay. Let me just tell you how there is a way to take care of these problems. Esophageal reflux, any type of serious, serious heartburn that really has the potential to increase a lot of other injuries. I mean, it’s not a minor issue. But the way that most people are dealing with this, the people that … doctors that understand how dangerous this really is. You have some doctors that remain in denial because they’ve prescribed so much and they believe, well, gee, I’m going to be brought into this lawsuit. They’re not. The doctor aren’t going to be brought in because the companies lie to the doctors, too.

So, here’s what people are actually doing, is they may use something like a Prilosec or a Nexium, but they break one in half, take one maybe every week and a half. In between, they take Zantac, they take Tums, they go at it with a system that is a little more complicated. They don’t rely on just Prilosec or Nexium. The doctors that are giving that kind of advice, are giving very good advice. If they’re saying, look, all I care about is clearing up your esophageal reflux problem, your heartburn, your ulcer. That’s all I care about. They literally are ignoring the science that’s showing that you have a 96% increased chance of having total kidney failure because of this.

Farron Cousins: And there’s obviously, I mean, there’s lots of dietary things people can do, habits to help not have to have these acid reflux. Obviously if you’re just dealing with general acid reflux or heartburn that’s chronic, that’s one thing. For other people who have the ulcers, that’s a little bit different scenario, but there’s always, as you just pointed out, talk to your … have the conversation with your doctor. Don’t just let them say, here’s some Nexium, and go out the door.

Mike Papantonio: But that’s a problem. You see, the problem is most people, they feel intimidated to talk to their doctor. They feel like their doctors, the doctors know best, and we’re not really even going to ask the tough questions. And so, in doing that, they really cause themselves harm. If you go to the doctor and you talk about this, and you say, doc, I want some answers and they’re not willing to give you answers, you need to find another doctor. Because there’s plenty of doctors that understand this is real and they’re finding ways to get around it by just not using Prilosec or Nexium or proton pump inhibitor all the time. It’s not like the end of the world because you can’t use these particular things.