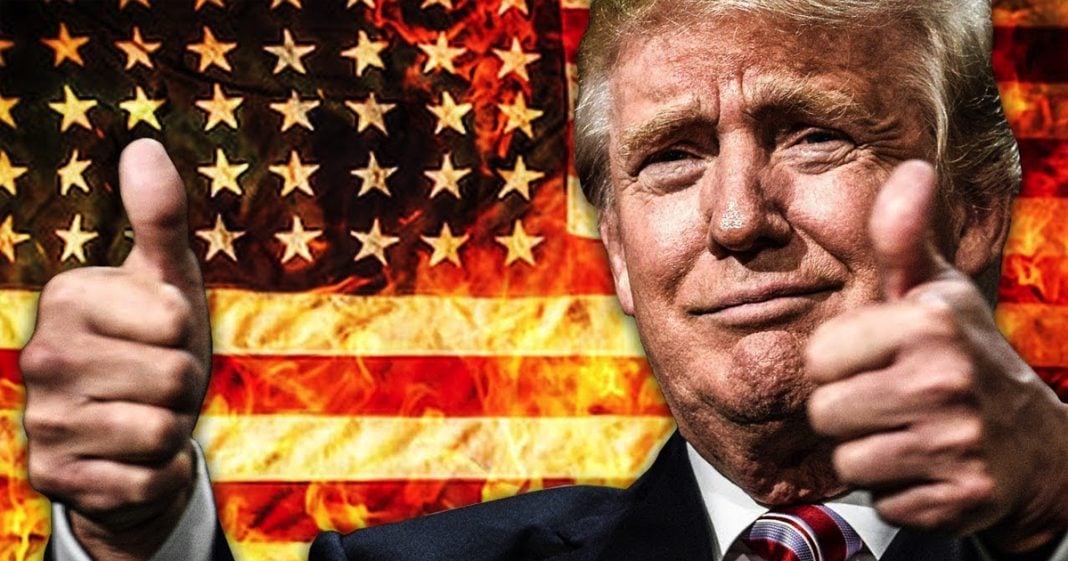 Our first question tonight comes from PlanetHospice, who asks, “Is #45 the most publicly detested (domestically and/or internationally) POTUS in the past 100 years and similarly has he received more public abuse, vilification & mockery than each of the others in that period?” Ring of Fire’s Farron Cousins discuss this issue.

We’re going to head over to Twitter right now and take some questions, so if you have a question for us, send it using the hashtag #AskROF. You can send it to us directly @RingofFireRadio, or you can send it to me on Twitter @FarronBalanced. Our first question tonight comes from PlanetHospice, who asks, “Is #45 the most publicly detested (domestically and/or internationally) POTUS in the past 100 years and similarly has he received more public abuse, vilification & mockery than each of the others in that period?”

This is a really interesting question. I mean, yes, obviously we can look at the polls, we can compare Donald Trump’s approval rating in the history of presidential polling, overall, not just among Republicans, is lower than the rest of them. Yes. So technically, by definition, according to the polls, he is the most publicly detested. Internationally, most countries do not like him. They view the United States as making the world more dangerous, Trump is making the world more dangerous. So I would say, probably internationally. That one’s a little more difficult to tell, ’cause the polls are not as clear. Plus, we have to remember that pretty much globally, George W. Bush was really, really hated.

So yeah, statistically, least popular guy to be president at this point. He hasn’t done anything decent for the American public. He hasn’t kept any of his campaign promises, including the horrid ones, like “Build the wall.” Republicans are actually getting a little testy about that not happening, while the rest of us are cheering. But he said hew as gonna reduce pharmaceutical drug prices, he hasn’t done that. He hasn’t made healthcare better. We didn’t get tax cuts, the wealthy elite did. He said he was gonna drain the swamp, he ended up packing it worse than it’s ever been packed before. So yeah, people are sick of the man. And all of that actually has nothing to even do with the investigations. You know, you start pulling that stuff in, and yeah, this guy’s in deep trouble.

On the other part, public abuse, vilification and mockery. No. He’s not actually. He has gotten a lot. He’s gotten more than most, to be honest. But let’s focus on the one thing first, the mockery. I know Saturday Night Live has their Alec Baldwin, they’ve got the president show now. But hey, when George W. Bush came into office, Comedy Central ran a cartoon called Low Bush*. So they were making fun of him and his entire cabinet. Saturday Night Live’s portrayal of George W. Bush was possibly one of the funniest things that that show has ever done! It was fantastic. They portrayed him as a bumbling idiot, which he actually was. There were calendars of “Bushisms” which each day you’d flip it over, just a new stupid thing Bush had said. There were entire books filled with those things. Nobody’s done that with Trump tweets, at least not that I’ve seen. Somebody should, by the way, jump on that. That’s a million-dollar idea for you.

But yeah, George W. Bush was subjected to a hell of a lot of mockery. The difference is, as horrible as he was as a president, as a human being, as a foreign policy guy, and domestic policy, and a religious hypocrite, George W. Bush didn’t let it get to him. Barack Obama was accused by Fox News of being an elitist, for eating arugula in his salad. His wife was accused of being a man. They still, literally, Fox News viewers, call Michelle Obama “he,” refer to her as a man. And they did this all throughout the presidency. They attacked Obama for wearing a tan suit. They claimed that he was creating death panels that your grandparents were gonna have to go in front of to determine whether or not they live or die. They said he was creating these FEMA concentration camps for conservatives. They lied about the IRS targeting conservative scams. It turns out they were going after conservative and liberal groups evenly.

So no, Trump didn’t get it worse than anybody. In fact, he’s gotten off light. Because too many media outlets are refusing to say that he lies when he lies. They say, “Oh, he misspoke. It was a misstatement. It was an untruth.” The phrase “untruth” has been in headlines. “Untruth.” He lied! Trump has gotten off easy, if you ask me, especially compared to what the two guys before him dealt with. The only difference is, regardless of your personal opinion of them or what they did to this country or the world, those two men had thick skin. And they were able to take the abuse, laugh it off many times, and not let it bother them the way it bothers Trump. That’s why those scandals and issues and horrid things people said about him kind of died off after time. These guys weren’t baiting him, they weren’t getting into it, trying to start this public sparring match.

Trump can’t do that. He is a very weak individual, just like his supporters. Sorry, you’re very weak. And that’s why he engages, and that’s why they keep doing it. It creates this back-and-forth. He loves it, they love it, but at the end, he wants to be the winner because he cannot stand being the loser, and he cannot stand them saying horrible things about him. So no. Trump is not the most mocked. Trump is not the most vilified, but he damn sure is the most unpopular.