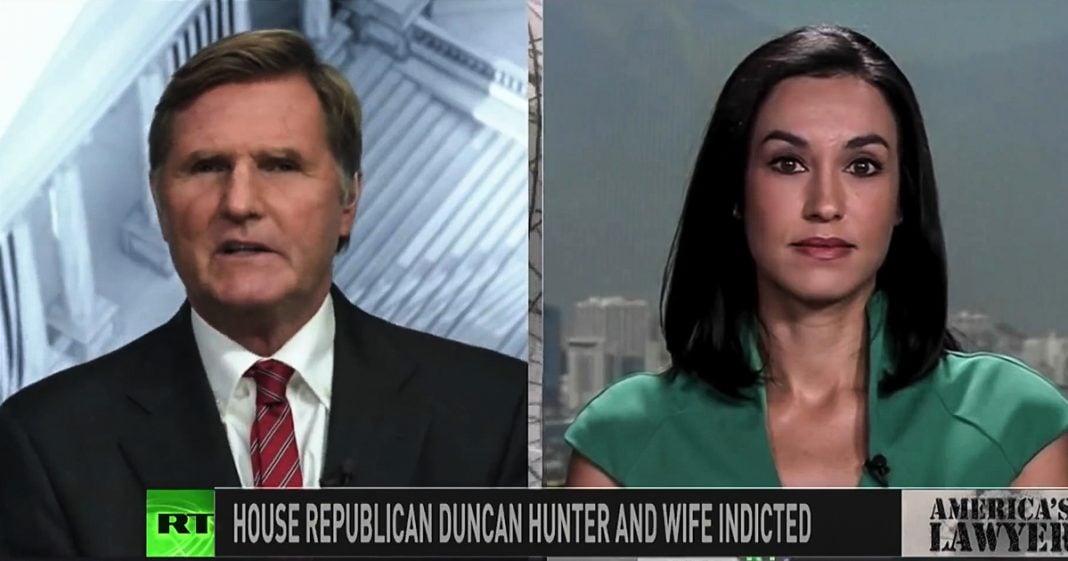 Via America’s Lawyer: Mike Papantonio is joined by RT Correspondent Brigida Santos to talk about Trump loyalist Duncan Hunter and why a criminal indictment isn’t the end of the campaign road for this Congressman.

Mike Papantonio: A damning indictment has just come out just a few months before election day. A Republican Congressman, Duncan Hunter, is on the ballot and in the hot seat. Joining us to talk about this is RT correspondent Brigida Santos. Brigida, there are serious allegations in this indictment, with a large amount of money stolen from the campaign, both by two defendants, Congressman Duncan Hunter and his wife. Break this down for us and tell us why this is such an important story, certainly, where it comes to the balance of the House right now for the Democrats.

Brigida Santos: Republican Congressman Duncan Hunter, who represents portions of California’s 50th district, which encompasses parts of San Diego County and also Riverside County, he’s been charged with federal crimes including wire fraud, falsifying records, and illegally using campaign funds for his own personal use. Now, his wife, Margaret, has also been charged. Both of them have pleaded not guilty, but the 60-count indictment outlines how the couple illegally used a quarter of a million dollars in campaign donations to pay for their children’s private school tuition, to fund lavish vacations and buy other personal items, including clothing, video games for their kids, entertainment, you name it. It sounds like they have spent their money on it, and it also outlines how they fraudulently claimed that they were writing this off as charitable donations in some cases, or counting some of these items as political spending.

Mike Papantonio: Okay, so you have this balance of power that’s supposed to be taking place right now. We’re going to see the … I keep hearing about the blue wave that’s getting ready to take place. I don’t think you even need a blue wave. If you keep getting indictments come down for Republicans, they’re, may not have to have a blue wave. It’s just going to happen on its own energy, but Hunter’s legal team has questioned the timing of the indictment. He says the name can’t be taken off the ballot in November midterm elections. Is he still going to run come midterms? I mean, what’s your reaction to that part of the story?

Brigida Santos: As of now, it does look like he’s going to run. Now, according to California election law, it’s too late to remove Hunter’s name from the ballot, and it’s too late to add a replacement Republican candidate to the ballot. In fact, the only way Hunter’s name can be removed right now is through a court order, and that’s very unlikely to happen. Now, some critics say that this is going to give Hunter’s opponent, Democrat Ammar Campa-Najjar, a boost in the election. However, that’s unlikely, and that’s because the constituents in this Republican-leaning district have already been polled by many local media outlets, and they say that they are still going to vote for Hunter regardless of the indictment. Now, they do say that they would prefer a new candidate, but they’re not going to get one. According to a SurveyUSA poll on Monday, Hunter was still leading by eight points, so this is probably not going to hurt his chances for reelection.

Mike Papantonio: Well, he may be reelected, and he’s indicted and put in prison in the process, but you know what that really tells me? It tells me how dangerous this tribalism in politics has become. Republicans are just as bad as Democrats. Democrats like to say, “Oh, no, we’re not tribal. There’s nothing tribal about us,” but I want you to think about something. This is kind of an aside, but it has to do with Brennan. Okay, Brennan, now you have the liberal Democrat so upset, Brennan is being victimized by Trump.

This is the same Brennan, you understand, who, when he was in office, set up all the black sites where people were waterboarded. He was actually called a war criminal by the same people who now say, “Oh, he’s a great American hero.” Why is that? It has to do with tribalism, and it has to do with, “We don’t have enough sense, we don’t have enough discipline to say, ‘Yeah, I’m a Democrat, but I got to be honest about what I am as a Democrat. What do I agree with? What don’t I agree with?'”

Same way with the Republicans. This really tells the story. Here, you got guys indicted. He’s indicted. His wife’s indicted. Seems to be the evidence is pretty good in this indictment, and nevertheless, Republicans are saying, “Well, he’s a Republican, so I’m going to vote him anyway.” What is your take on that, I mean, this notion of tribalism? Don’t you see it every year becoming more and more of a threat to democracy? What is your take on that, Brigida?

Brigida Santos: Absolutely, but an indictment, again, these are charges. It doesn’t mean he’s going to actually be prosecuted, and oftentimes, you see this, these leaders get indicted for this, and then they end up getting a slap on the wrist. They’re allowed to continue on in politics. He might go to jail, but he also might be allowed to stay in office. As you said about the tribalism, it’s both parties that are just as corrupt. Back in 2011, a Democratic candidate had this same problem and was indicted, and in 2013, a Democrat was also indicted and pleaded guilty to the same charges here, misusing campaign finances for their own personal use, so this is happening on both sides of the aisle. Unfortunately, it has just become politics as usual, and that is why constituents will vote for him anyway, because they just don’t trust the system.

Mike Papantonio: Yeah. This sounds like a chapter out of Confederacy of Dunces. Everybody should read that book to understand how bizarre politics has become. Thank you for joining me, Brigida.