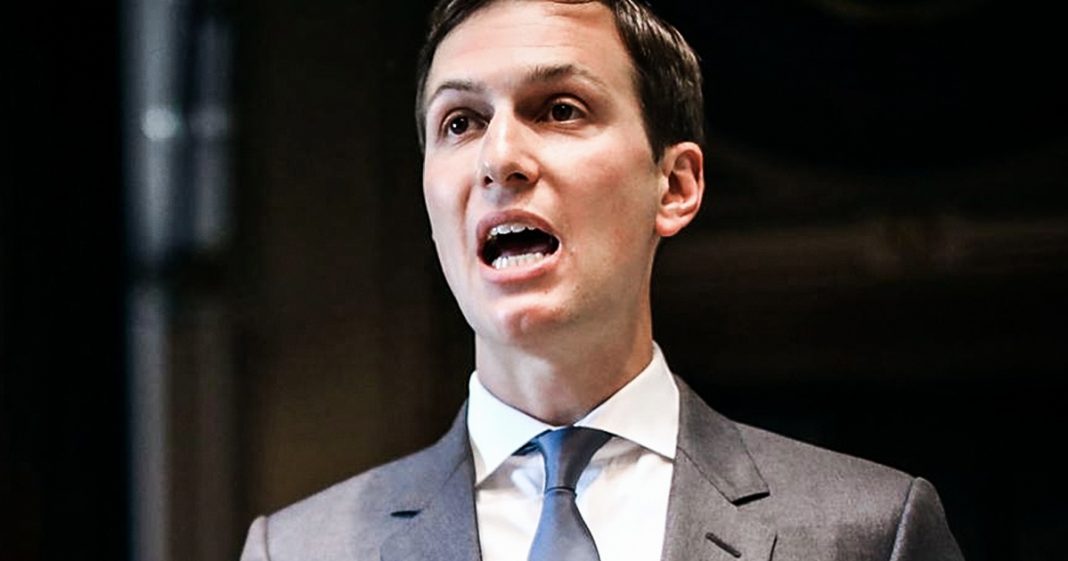 Jared Kushner, possibly the least qualified person to serve in the entire Trump administration, is apparently super mad that the President won’t listen to his advice. Its almost painful to say, but this actually seems like a smart decision by the President considering how incompetent Kushner is. Ring of Fire’s Farron Cousins discusses this.

I disagree with just about everything that Donald Trump has done since becoming president of the United States. It’s not just because I’m a bitter partisan, it’s because I don’t believe in anything he’s done. He’s enacted some horrible policies, he’s done some horrible things with foreign policy, domestic policy, everything, you name it.

But recently, Donald Trump did something that I actually do agree with, and I think it was the right call and that thing, was to stop listening to Jared Kushner. According to Vanity Fair reporter Gabriel Sherman, who we’ve mentioned many times, one of the most reliable sources on reporting from what happens inside the White House. Jared Kushner right now is super sad and he’s very sad because he feels like Donald Trump just never listens to him anymore. He won’t do anything Kushner says, he won’t listen to him and he almost according to White House insiders, takes joy in not listening to Jared Kushner.

Here’s were this story came from. Kushner was one of the people who told Donald Trump to not revoke Brennan’s security clearance, because it was gonna create a huge backlash for the president. Now I don’t agree with Brennan being stripped of his security clearance for the reasons Donald Trump did it, I have no problem with him losing the clearance, I just don’t like why Trump did it.

But, if Jared Kushner knowing what we know about him, were to come up to you and say you’re not even the president, you’re just some person on the street and Jared Kushner says, “Hey, let me give you a free piece of advice here, blah, blah, blah.” It’s probably gonna be within your best interest to do the exact opposite of what Jared Kushner tells you to do. This is a guy who right now is under investigation by New York City Regulators, by the FBI, by the IRS and by the State of New York as well. So he’s under at least four different major investigations at this very moment, because he makes horrible decisions in his own personal life.

So again, Donald Trump not listening to Jared Kushner when he gives him advice, is probably the smartest thing Trump has done since taking office. And again, I do not agree with why Brennan’s security clearance was revoked. Trump did it to get back at a political enemy and that is 100% wrong, potentially unethical and illegal.

But, I don’t give a damn about John Brennan having a security clearance, this is one of the men who helped organize George W. Bush’s torture regime. Yeah, have no sympathy from him losing it, have no desire for him to have it. Would love to see the man spend the rest of his life in prison for committing war crimes all over the planet.

So, let’s not confuse my disdain for Jared Kushner with appraise for Trump’s actions, because those are different. But, I am happy that Kushner is sad with his position in the White House. This is a guy who kicked out low-income, low-rent tenants from buildings he would purchase, so that he could take their apartments and build them into multi-million dollar condos to sell to superrich people. If he’s a little sad about the fact that he sucks at his job and nobody wants to listen to him, I would say that at the very least, he’s getting a little bit of what he deserves.