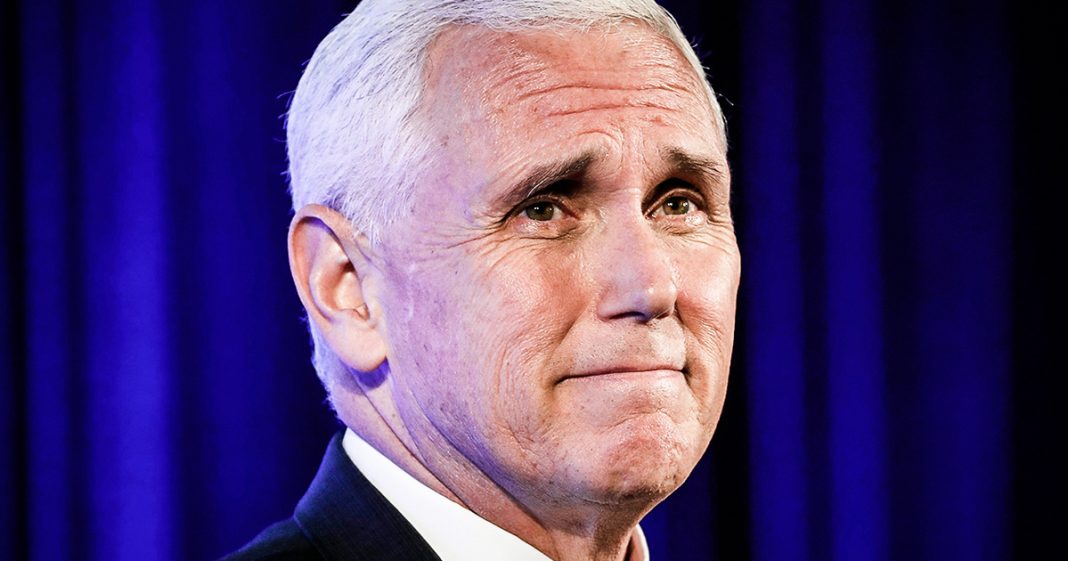 Trump biographer Michael D’Antonio has a new book out about Vice President Mike Pence, and he believes that Pence is waiting for God to remove President Trump from office so that Pence can finally take over. While that may not be out of the realm of possibility, the really interesting part about the book is how D’Antonio explains how Pence is able to reconcile his alleged Christian faith with Donald Trump’s complete lack of morals. Ring of Fire’s Farron Cousins discusses this.

This week, CNN aired an interview with Trump biographer, Michael d’Antonio, who actually has a new book coming out about Mike Pence … One of the first books about the man, a guy we really don’t know too much about. But d’Antonio says that he understands Mike Pence, and that he knows what truly motivates this guy, and why he’s able, more importantly, to justify his Christian beliefs while working for one of the most inept and corrupt presidents of our lifetimes.

So take a look at this clip where d’Antonio explains how Pence justifies his phony Christianity based against Trump’s morals. Here it is.

Host:
There’s a quote here I want to read to you. “The Vice President actually believed he could bring Trump to Jesus, and like Jesus, he was willing to do whatever was necessary to help save Trump’s soul.”

Michael d’A.:
That’s true. Within the faith that Mike Pence subscribes to, there’s this idea that anything is permissible in pursuit of a higher goal. So the higher goal would be bringing Donald Trump to Christ. Anything that goes on in order to do that, including Mike Pence abandoning many of his principles.

He was always against religious tests for entry to the United States until President Trump said we’re going to do it. It’s not in Mike Pence’s heart to put kids in cages, and separate from their families, but Trump did it, so Pence is for it. You can go down the list. Roy Moore. There are so many things that he hasn’t spoken up on.

Host:
The President’s own personal family.

Michael d’A.:
Yes. To imagine Mike Pence with this grabber guy as his running mate, running for president, is almost mind-boggling. And yet he keeps his mouth shut. You look at him standing behind the President at various events. Expressionless doesn’t really capture it. You can’t tell what he thinks ever.

Now, for hardcore believers in Christianity, that is actually true. That is something that is a part of the doctrine. If you’re trying to save somebody’s soul, allegedly, whatever you do in that pursuit is okay, even if it goes against your own morals, and so that’s how Mike Pence tries to say, “Well, yeah. This guy has affairs. He’s corrupt. He’s done a lot of things that are probably illegal, but because I’m trying to save his soul, it’s okay for me to stand by him, and defend him.”

But that was just a small part of it. That was part of the interview they talked about. The bigger part is the fact that d’Antonio mentions that Mike Pence is actually hoping and thinking that God is somehow going to remove Donald Trump from office so that Mike Pence will become president. Mike Pence believes it is his divine right to eventually become the President of the United States. He believed back in high school, according to this new book by d’Antonio, that God had chosen him to be President of the United States. And now that he is Vice President, he knows … He believes firmly that all of this corruption is sent from God to remove Trump to make Mike Pence the president.

Now, I know we’ve talked a lot about impeachment, and I have said plenty of times that Pence would be 99.9% just as bad as Donald Trump, but hearing this is actually pretty scary. I still think I would prefer a President Pence over a President Trump, but there’s only one reason for that at this point. Obviously, we would see no change in policy whatsoever, and in fact, with Pence, we might see even more … Might! We would see even more anti-LGBTQ legislation. We would see more anti-women legislation. We would see more anti-minority legislation. Holy wars, potentially, overseas against other religions. Yeah, it would be really, really, really bad. But Pence is beatable. If Pence were the nominee in 2020, he is beatable. He is beatable by damn near any Democrat out there. Trump isn’t.

Trump is a very tough candidate to beat because he is so crazy, and because you don’t know what he’s going to do, or what he’s going to say. And the fact that people in this country for some reason seem to believe everything he says. Hard to beat a guy who can make up something on the spot and everybody just believes it’s true, and that you’re the liar now.

Mike Pence can’t do that. Mike Pence has no charisma. Mike Pence would be defeated handily in 2020. Trump wouldn’t, and that is why I still, even knowing this scary information about Pence, I would prefer him as our temporary president than having Donald Trump as our president for another six-and-a-half years.