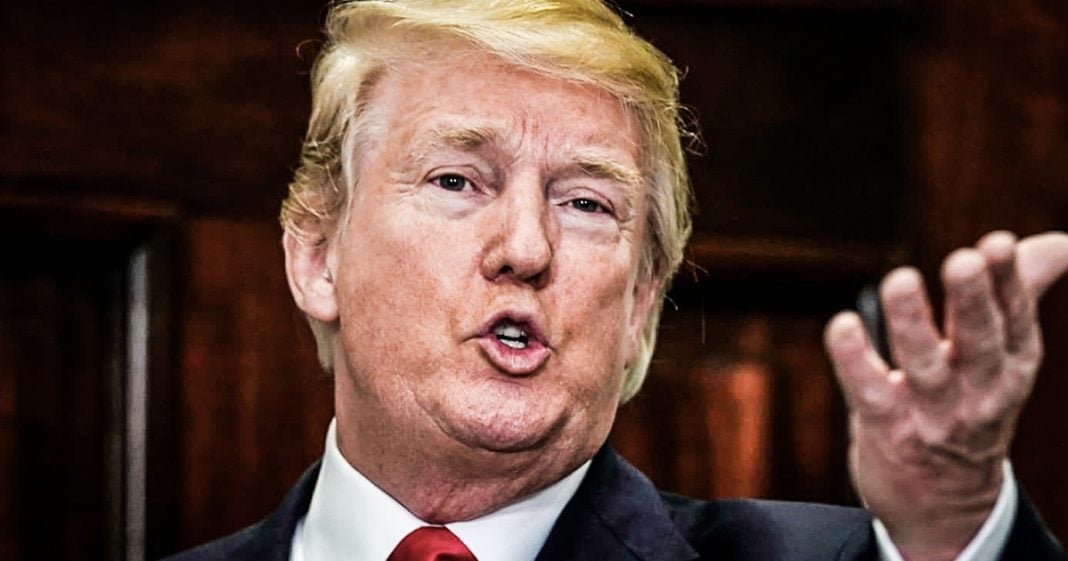 According to a new analysis from a leading retailer’s association, the trade war that Donald Trump has launched will end up costing consumers a staggering $6 billion. That’s assuming that spending stays at current levels, which experts predict it will not in order to avoid paying that heft $6 billion price tag that Trump has slapped on us. This can only end one way – badly. Ring of Fire’s Farron Cousins discusses this.

The National Retail Federation, one of the largest retail organizations in the United States, released a report last week showing that Donald Trump’s trade wars, the tariffs that he has put on goods coming from China, specifically furniture and luggage, just those two things, are going to cost American consumers an additional six billion dollars. Six billion dollars in additional cost that fall on you and me and everybody else in this country. Just because Donald Trump is having a fit about trade imbalances between the U.S. and other countries.

Six billion dollars that we will waste because Donald Trump decided to start a trade war because of his massive ego. And, according to Trump himself, he only plans on putting more tariffs in place against countries like China. He has proposed an additional 16 billion dollars last week, as well, the same week that this particular report came out. Here’s the caveat though. That additional six billion dollars in cost that consumers are going to have to pya, is only based on current spending levels. So, that assumes that everyone one of us is willing to go out there and pay the higher price for these things, the furniture and the luggage.

That’s not going to happen. When prices go up, especially when they go up super high super fast, consumers stop spending. What happens when consumers stop spending? It creates a surplus of goods and less need for workers because you’re not selling anything. You don’t need to manufacture new things, because you’re already sitting on a surplus. That leads to layoffs. Layoffs lead to less spending. And so on, and so forth, and the cycle repeats itself.

So this six billion dollars that the National Retail Federation is trying to say we’re going to incur, is hypothetical. It will be there, and if we all decide, “Screw it.” We don’t like holding on to our money anyway and we like getting ripped off, then yeah, we’ll go and we’ll end up spending that extra six billon. But history tells us, and human nature tells us, that that’s not going to happen. What’s going to happen is that spending is going to shrink, jobs are then going to retract and so on and so forth, and it’s all because of Donald Trump’s trade wars.

Now I guarantee you that the republicans are still freaking out about this right now, because they understand that any contraction within the U.S. economy right now, is going to cost them dearly in the mid terms. They also understand that standing up to Donald Trump could make him a little angry and maybe he’ll tweet out something mean about them, so they don’t know what to do. Would they rather face 30,000 angry voters in their district or one angry idiot with a twitter app? They would rather face the 30,000 angry constituents back home, because that’s how spineless they are.

They are too terrified to stand up to Donald Trump and tell him that his trade wars are stupid and that it’s going to end up wrecking the U.S. economy and they would rather go back and tell their constituents, “Whoa, whoa, everything’s going to be fine. Don’t worry, he knows what he’s doing. He’s a very stable genius, remember?” It’s not going to work out well for them, however you slice it. There are no winners in trade wars. And Donald Trump is making sure that out of all the losers who are going to be in this situation, the U.S. becomes the biggest one.