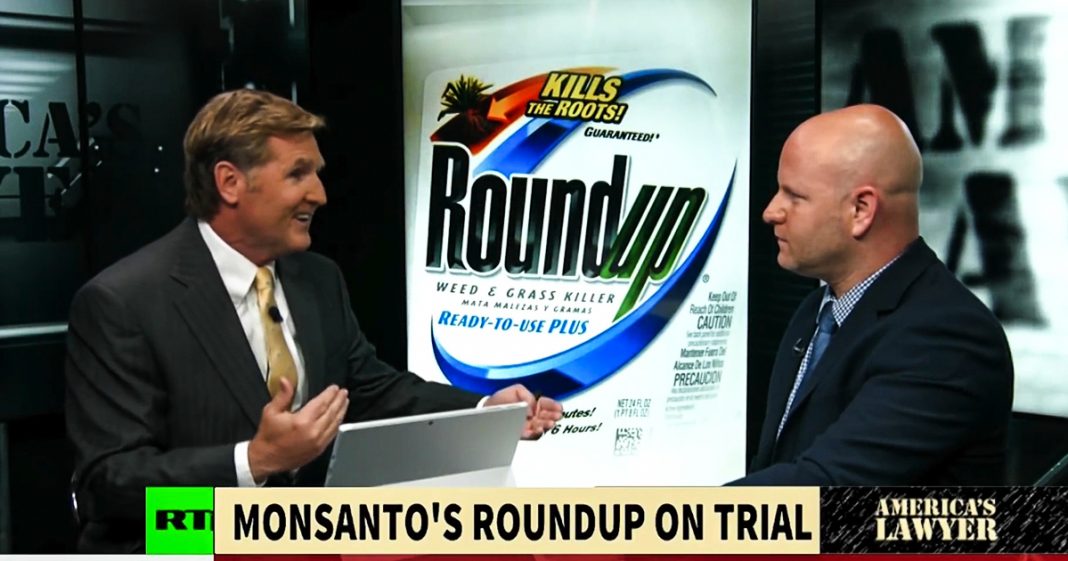 Via America’s Lawyer: Mike Papantonio and Farron Cousins discuss The latest in the case against Monsanto’s ‘Roundup’ and give a refresher about what we know so far on the dangers of Roundup.

Mike Papantonio: The first major lawsuit against Monsanto over the safety of their blockbuster weedkiller, Roundup, is currently underway. So far, the science being presented by the plaintiff is looking really, really bad for Monsanto. But we’ve known about this science for decades, yet the company has been engaged in one of the largest coverups imaginable to downplay the scientific reporting that told us that Roundup and the main ingredient was highly toxic.

Joining me to talk about Monsanto’s legal problem and other legal issues of the week is Farron Cousins, executive editor of Trial Lawyer magazine. Farron, as you know, I took the first three depositions on liability for this company that were actually taken. I took those about two months ago. Our trials start against Monsanto in the summer. We have 16 consolidated cases that we’re going to try. But this case is being tried now. Some very capable lawyers. I think what happens sometimes is people judge the first case and they say, “Well, this is going to determine the future of the project.” That’s not really the case. As a matter of fact, interestingly enough, I handled the asbestos litigation, the first 12 asbestos cases that were tried throughout the country before I actually started, they were 12 losses. Then all of a sudden, not because of me but because of some good lawyering, all of a sudden, people started winning cases all over the country. Then that solved the asbestos crisis here in America.

Farron Cousins: Well, to start, I think a lot of the legal analysts out there are trying to use the most recent history, forgetting everything about the past, and they’re saying, “Well, if this goes the way that the Johnson & Johnson talcum powder cases go, after that first loss for J&J, it was just downhill from there for the company.”

Farron Cousins: They think that they can translate that to Monsanto, but everything is different. But so far, we’re a week and a half into this trial, I’m liking what I’m seeing the lawyers do here because they’re not only focusing on here’s science one, science two. They’re out there, they came out of the gate, showing that this was a coverup. Monsanto engaged in potentially illegal behavior, depending on how you want to look at it. But they engaged in a decade’s long covered up, hired toxicologists who when they finally said something they didn’t like or came to a conclusion Monsanto didn’t like, fired the person, buried their science-

Farron Cousins: … and instead went with pseudo science.

Mike Papantonio: Well, let me say, I know these lawyers. These are very good lawyers. The first case is always interesting because a lot of it depends on the judge. If the judge has talent, and votes aren’t in yet, if the judge has talent and is able to work through really complex issues, then both sides have … they’ve got an equal chance. I don’t know much about this judge right now. We’re going to know probably in about another week as we watch her rulings.

But I do know this. I do know that the science is so bad for Monsanto here. It’s this bad. As a matter of fact, when I was taking these first three depositions, what we found in the deposition was that the top toxicologist in the company, the woman who knew everything about the dangers of this product, she knew about the risk of cancer, the risk of non-Hodgkin lymphoma, she knew about neurological risk, she knew about birth defects risk, she knew all of this. She wrote in a memo to everybody who would read it, “Do not under any circumstances tell the public that this won’t cause cancer.” Of course, for decades, that’s what the sales teams have been telling. “Don’t worry about it. It won’t cause cancer.” Then the World Health Organization comes out a couple of years ago and says, “Absolutely it will cause cancer.” Pick up from there.

Farron Cousins: That immediately launched this massive I guess media campaign by Monsanto and the representatives and the people that they were paying to go out there and say, “No, IARC is wrong. They’re a political organization. This is a political hit job,” is what they tried to tell us, as if Monsanto and Roundup was some kind of partisan issue.

Farron Cousins: This is people’s health, so they launched this massive disinformation campaign that included going online, finding anybody, which I found out included myself, who would write something negative about Monsanto, attacking them online, on Twitter, on Facebook. I was getting messages from people who I realized, “Well, let me know who this person is.” Able to track them back to Monsanto.

Mike Papantonio: One of the most extensive troll systems in the country. They would identify where Monsanto’s being criticized for anything. Then the first thing they would do if it’s the media, if it’s corporate media, forget it. Corporate media can’t tell the story because corporate media gets so much money. Look, there’s a Roundup add every 15 minutes, so they’re making a ton of money.

Actually, I got to tell you something. In the actual documents that we reviewed, they understood that the way that they were going to keep this quiet is to pay a lot of money to corporate media. Give corporate media a lot of money, pay for a lot of advertising. The other thing that they were going to do is they were going to get control of politics. What they did was they would take their people, they would move it from Monsanto to the top of EPA, from Monsanto to whatever regulatory agency was a problem for them, they would flood that regulatory agency, call in political favors. You know who did the most political favors for them? Take a guess.

Mike Papantonio: Obama was next. In that pecking order, it was Bill Clinton, because his wife was … Hillary worked for the Rose Law Firm down in Arkansas. Their contact on the GMO, if you follow the GMO part of this, where the risk for GMO, Farron, is this. It’s interesting. The risk on GMO is not so much the DNA issue. It’s the fact that these seeds are soaked with Roundup pesticide. Of course, the Roundup pesticide stays inside of your body. It doesn’t biodegrade overnight. It stays there. As a matter of fact, they do urine tests for people all over the country. They found Roundup glyphosate in their urine even if they’ve never worked around a farm.

Farron Cousins: We’re finding it in children for the formula in their bottles. We found glyphosate. Cheerios, beer, wine, everything. Monsanto controls the seeds, they control the herbicides, they control our food.