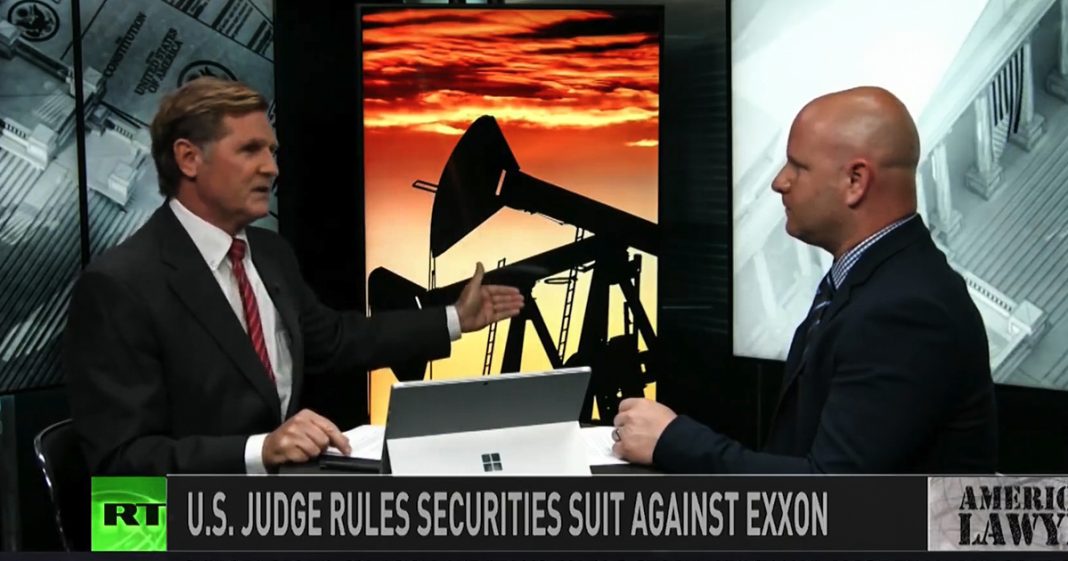 Via America’s Lawyer: Mike Papantonio and Trial Magazine Editor Farron Cousins talk about the lawsuits Exxon is facing from shareholders that are losing money due to Exxon’s climate change cover-up.

Mike Papantonio: Exxon’s facing a new wave of lawsuits, this time from shareholders who are losing money because the company covered up the dangers of climate change for decades. Now, I’ve got to tell you something. Every now and then, you’ll see a case on climate change that you say, “You know what? That’s probably going to work.” You and I talked about the children’s case that was filed where you had children that were filing cases where they’re asking the court to tell the government on a writ of mandamus, “You must comply with the law. You must comply with the clean air bill.” That was something that will work. I feel like that will work.

This is another one. Shareholders said, “Look, Exxon, you lied to us. You had us investing all this money. While we were doing that, you didn’t tell us where this could end up. It’s going to end up badly. What’s your take?

Farron Cousins: We have evidence, paper evidence, documents, from Exxon that show that … I believe it was 1948, was one of the first times they admitted amongst themselves internally that, “Hey, there is a direct connection between what we do and this thing we’re calling a Greenhouse Effect.”

Okay, fast forward to the 70s. They 100% knew about it. Their documents were all over on it. This was before the public had any idea what global warming or Greenhouse Effect was. Exxon has known for probably 80 years at least that climate change is real, that what they were doing was making it worse. So for 80 years, they’ve been lying and withholding this information from their shareholders.

Mike Papantonio: And saying, “We’re going to prove that this is not true. There’s not enough science.” While they were saying there wasn’t enough science, their own in-house scientists were saying, “Yeah, climate change is true. Oh, by the way, greenhouse gases are caused by what we’re selling, as far as fossil fuels.” The number I think was like 180 reports. Maybe you remember exactly, but it’s around 180 reports that came in from in-house, that all concluded at least part of what we’re talking about here. The only they shared with the public with their shareholders were about 15. Even those, they kind of phonied up to make it look like there’s not a problem here.

So I think the shareholder case has real possibility, shareholder derivative case, in this situation has a possibility at least in getting us as far as telling the whole story. This won’t simply go away. Documents are going to continue coming in. We’re going to see the Tillerson … You know, Rex Tillerson, this guy that everybody, “Oh my God, he’s such an important part of government. If Trump gets rid of Tillerson, it’s going to be total disaster.” Tillerson was behind all this. Tillerson was the voice going all over the world saying all this stuff about greenhouse gas and climate change is a bunch of bunk, it’s all phonied up by activists, doesn’t mean anything. Now we’re going to see what Rex Tillerson knew when he was out there saying that.

Farron Cousins: Well, yeah absolutely. We know what Rex Tillerson knew. We know the documents he was sitting on. We know what he was covering up. We know which front groups he was funding and giving money to to say that climate change isn’t real. There is no question whatsoever about what Exxon did here. The shareholders know it now. They finally have had their eyes opened. It’s just a little disappointing that the only time we can hold them accountable for climate change-

Mike Papantonio: Well, think about this. Here, you don’t have to show causation.

Mike Papantonio: You don’t have to show, “Well, the science is in dispute here, it’s in agreement here.” You have to, as a jury, decide … First of all, the shareholder derivative case is going to be in front of a judge. What’s going to be decided is, “How much information did you hide from the American public?” How did you draw shareholders into continuing to invest in your company, when in your own file cabinet you had these letters, you had memos, you had reports from your own scientists saying, “This is a big deal. We have to do something about it”?

Farron Cousins: And other shareholders at other oil companies need to follow suit as well to see what the company they’re investing in has been hiding, too.

Mike Papantonio: Yeah, Farron, thanks for joining me. We’ll pick up some more news on this story I’m sure time and time again.