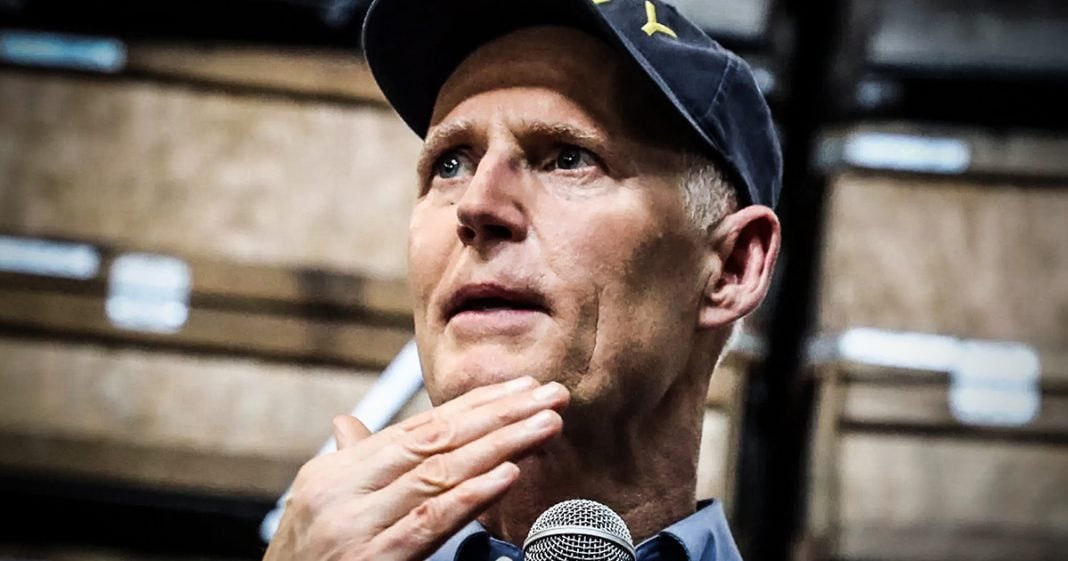 According to an explosive new report this week, Florida’s Republican governor Rick Scott and his wife Ann are hiding millions of dollars in offshore tax havens in the Cayman Islands. At a time when anger at millionaires over their greed and corruption is reaching new heights in America, this is the worst time for this news about Scott to break – not to mention the fact that he wants to unseat Florida Senator Bill Nelson to join Marco Rubio in the US Senate. Ring of Fire’s Farron Cousins discusses this.

Florida Republican Rick Scott, and his wife, Ann Scott, are currently hiding millions of dollars in the Cayman Islands, where the US IRS can’t touch it. One of the wealthiest Republican politicians in the country, Rick Scott is also, basically, a tax cheat. He doesn’t like paying for things, here in the United States, so, according to a new report by the Tampa Bay Times, Scott and his wife are hiding roughly $2.9 million offshore in the Cayman Islands.

Now, Rick Scott and his wife were quick to defend themselves, saying, “Hold up. Hold up. We put our money in a blind trust. We have no idea where it goes, or any of that, and we always comply with US tax laws.” Well, that’s all well and good, but Cayman Islands are outside of US tax laws. Even if you comply with it, you still aren’t paying anything. It’s technically not illegal to move your money over to the Cayman Islands. It’s just quite the scumbag thing to do, especially for a guy whose company, before he even became Governor, had ripped off the Federal Government for billions of dollars. You’re doing it on a little smaller scale now, though, I see … just $2.9 million. Yeah, that’s small potatoes compared to the more than one billion your company stole from the Federal Government.

Rick Scott, our Governor here in the State of Florida, who still has political ambitions, and basically, does, eventually, want to run for President of the United States … he is one of the most corrupt … not just politicians, but human beings, that we have in the United States, today. The fact that he was able to serve eight years as our Governor, in spite of pulling off the biggest Medicaid … I believe it was Medicaid, maybe, Medicare … fraud against the US Government in history. That’s what his company did. Biggest fraud against the Government in history, up to that point. It has, actually, now since been defeated. He no longer holds that record, unfortunately for him.

This man is absolutely a cancer on the State of Florida. He has done everything possible to destroy environmental protections, for a state that is 100% dependent on tourism, most of which is environmental for our beaches. He’s destroyed it. He’s cut the funding. He’s allowed this toxic algae bloom that we have going on all over the state, in the Gulf of Mexico, in the Atlantic Ocean … he’s partly responsible for that, by cutting environmental funds, and allowing those overflows to go forward.

The man is disgusting. What’s even worse now, is that he also appears to be a bit of a tax cheat. Just like so many of the wealthy elite, here in the United States. Especially bad for Rick Scott right now though, considering the fact that people are keenly aware of the gap that appears to be growing between the haves and the have nots. For a guy like Rick Scott to be hiding millions of dollars offshore in the Cayman Islands, at a time when the 99% are getting screwed over every single day … probably not going to bode well for his political future. If you don’t believe me, maybe we would ask Mitt Romney, who, back in 2012, one of his biggest hurdles to overcome during the campaign, was the fact that he, too, was hiding millions of dollars in the Cayman Islands, ’cause he didn’t want to pat taxes on them. Seems to be a common theme among millionaire Republicans.