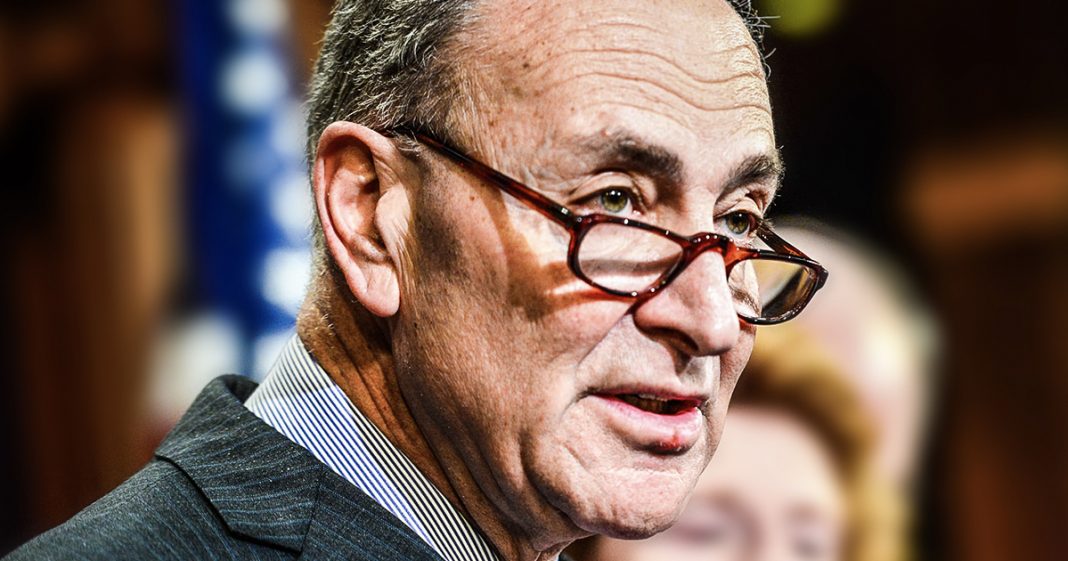 Senate Democrats decided to cave into Republican demands by agreeing to fast track 11 of Donald Trump’s pro-corporate, anti-consumer judicial nominees this week. Not only did the Democrats have absolutely nothing to lose by standing up to Republicans, but they’ve also once again set themselves up for major pushback from voters. Ring of Fire’s Farron Cousins discusses this.

On Tuesday of this week, in a story that’s almost impossible to find anywhere, Democrats, led by Chuck Schumer, agreed to cave in to Republican majority leader Mitch McConnell so that they could fast-track 11 of the pro-corporate, anti-consumer judges that Republicans are wanting to ram through the courts, or through the nomination confirmation process, before the midterm elections. This is why people get mad at the DNC, and the establishment Democrats, and at the Democratic Party itself in general. There was no reason whatsoever for the Democrats to cave on this issue, none. They had nothing to lose and everything to gain by standing up to Mitch McConnell. We reported last week that reports are showing Mitch McConnell is terrified, and his only concern right now before the midterms is ramming through as many pro-corporate, right wing political hack judges as possible, because he fears that Republicans are going to lose the Senate, and they won’t be able to confirm another pro-corporate judge, and the Democrats, led by Schumer here, gave him everything he wanted.

They just did his work for him. Here’s what this means. This means 11 more lifetime appointments of judges who will always rule for corporations over consumers. If you have an action against a corporation, maybe they stole your wages, maybe they put out a pharmaceutical that left you with cancer, or destroyed your kidneys, or maybe a major company polluted the waterway. He’s going to side, these judges, these 11 he, she, whoever they are, they’re going to go with the company over you. That’s what they do. That’s what we see from Republican-appointed judges time and time again and Schumer just handed them 11 seats for no reason. Schumer gets nothing out of this.

The Democrats get nothing out of this, nothing, but they did it anyway. Why? I honestly can’t answer that, and I don’t think a guy like Chuck Schumer could either, because that’s not going to be the end of it. There’s more than 11 judicial vacancies out there, plus you still got to defend that Supreme Court seat, but they’re not going to do it. They’re not going to do it. That’s what’s so terrifying here, and that is why these midterms are so important. It’s not just to beat Republicans. It’s to beat back against the weak-willed, corporate Democrats who will cave into Republicans even when they have nothing to lose from standing up to them, because that is what we’re dealing with with most of the Democrats sitting the US Senate today, spineless, weak, and they don’t give a damn about American consumers and American voters.