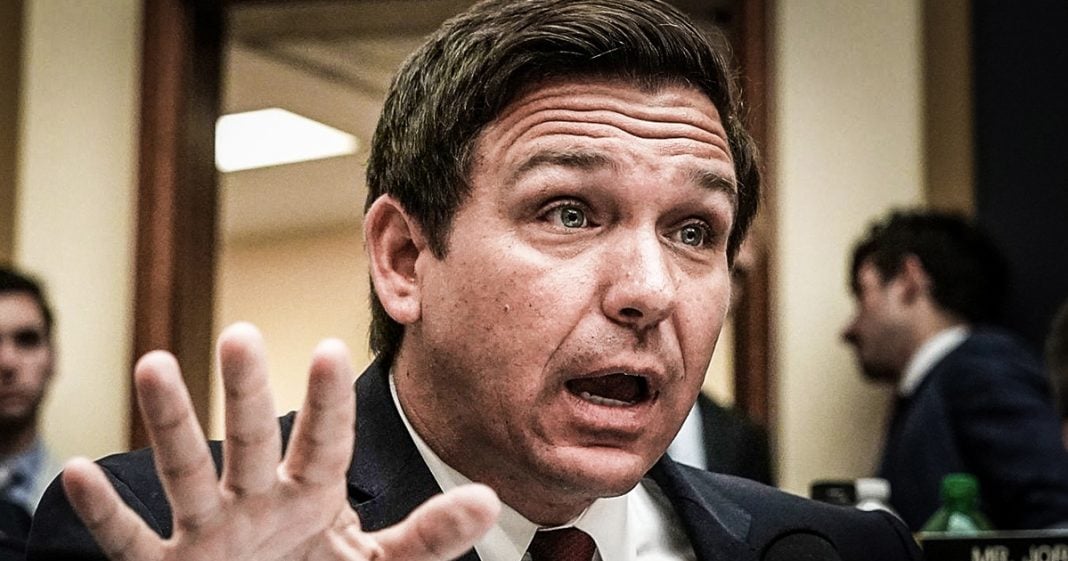 Representative Ron DeSantis, the man who just won the Florida Republican primary to be the GOP candidate for governor this year, has been revealed to be a moderator on a Facebook page that pushes crazy conspiracy theories, racist rants, and other potentially career-ending craziness. If you thought DeSantis’s “monkey” comment was bad, this Facebook page will truly shock you. Ring of Fire’s Farron Cousins discusses this.

Earlier this week, Florida Republican, Ron DeSantis, won the Republican primary to be on the ballot as a potential next governor for the state of Florida. DeSantis is a Trump-backed candidate, he ran one of the most disgusting ads ever where he was trying to indoctrinate his young child into Trump-ism, had them building a wall with their little blocks. And then, immediately after winning that primary on Tuesday, he goes on Fox News to help boost his credit, and ends up making one of the biggest racist gaffes you could imagine. Here it is.

Host:
How do you plan to beat him?

Ron DeSantis:
Well, look, I mean, Florida elections are always competitive, and this is a guy who, although he’s much too liberal for Florida, I think he’s got huge problems with how he’s governed Tallahassee. He’s is an articulate spokesman for those far-left views, and he’s a charismatic candidate. I watched those Democratic debates, and none of that was my cup of tea, but he performed better than the other people there. So, we’ve got to work hard to make sure that we continue Florida going in a good direction. Let’s build up the success we’ve had under Governor Scott.

The last thing we need to do is to monkey this up by trying to embrace a socialist agenda with huge tax increases and bankrupting the state. That is not going to work, that’s not going to be good for Florida.

Okay, so, after that happens, Fox News had to come out and say, “Look, hey, we do not agree whatsoever with him using that, that is horrible language.” DeSantis tried to clarify and say, “No, no, no, that’s the phrase, right? You go in there and you monkey something up.” It’s muck, muck up, you muck something up is the phrase. That’s muck, not monkey. And we all know that, that is a derogatory term for African American people.

Nonetheless, DeSantis supporters are out there saying, “He didn’t mean it racist. You guys try to make race in everything.” Okay, then explain this, because at the same time that, that story was blowing up, the American Ledger, news organization, put out this new expose that shows that Ron DeSantis is actually the moderator of a Facebook group, a Tea Party group with more than 95,000 members online that spreads racism and conspiracy theories. Here’s just some of the things.

They refer to Black Lives Matter as ghetto scam. They’ve made fun of the Parkland survivors. They’ve said that what happened in Charlottesville was a hoax, and many, many more. You can actually find the link to this story in the description of this video. I encourage everyone to go in there and look at some of the truly disgusting posts that this Facebook group has been putting out over the years. You can even see some if you go to the link for the American Ledger. You can actually see some that have Ron DeSantis’s name on them.

So, yeah, this guy was 100% embedded with this group, he was an active participant, and he helped to push their crazy conspiracy theories and their racism. So, don’t try to tell me that Ron DeSantis didn’t know exactly what he was saying by saying, “Monkey it up” about the first African American to ever win a major party nomination to be governor in the state of Florida. The two don’t mesh well together. Ron DeSantis knew exactly what he said. He meant exactly what he said. And it was done with malicious intent.

If you don’t believe that, then I suggest you go to that little Facebook page, the link for the American Ledger, and see for yourself what Ron DeSantis truly stands for.