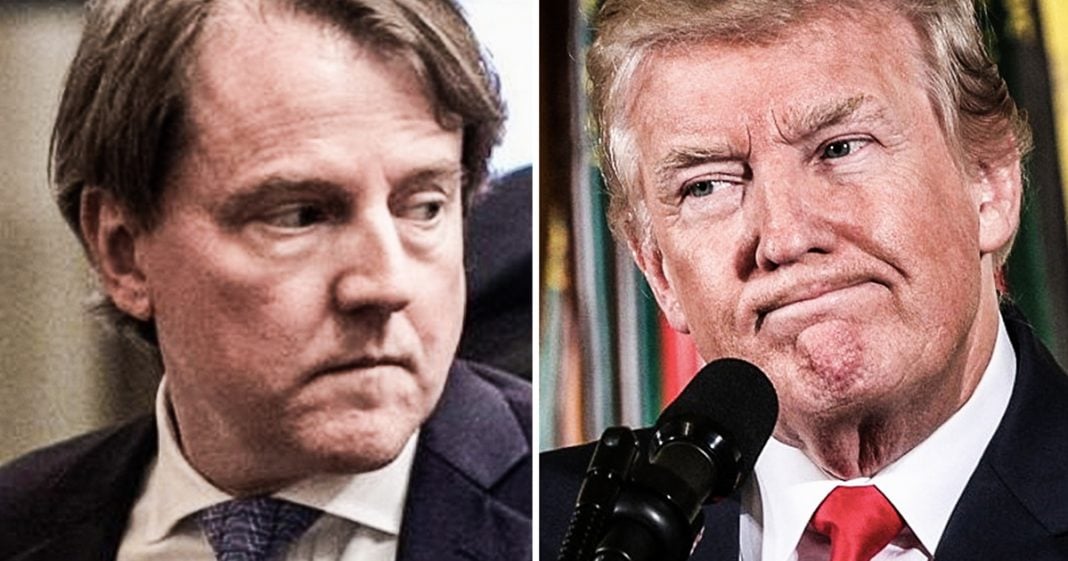 On Wednesday, Donald Trump tweeted out that White House counselor Don McGahn would be leaving the administration sometime “in the fall,” making it sound like McGahn had issued his resignation. But as it turns out, he was being FIRED by Trump at an unspecified date, and McGahn himself actually learned about it via Twitter. Trump is a coward, and he’s firing McGahn because he’s scared of what he has, or possibly could, tell Robert Mueller. Ring of Fire’s Farron Cousins discusses this.

It was announced on Wednesday, that White House Counselor, Don McGahn would be leaving this administration soon, so obviously the guy submitted his resignation. Donald Trump tweeted out the following about it:

“White House Council, Don McGahn will be leaving his position in the fall. Shortly after the confirmation, hopefully, of Judge Brett Kavanagh, to the United States Supreme Court. I have worked with Don for a long time and truly appreciate his service.”

So yeah, you read that tweet and you think, ” Okay, McGahn resigned.” Well you know who else saw that tweet and was a little confused? Don McGahn. Don McGahn didn’t know he was leaving this administration in the fall. He learned that he would be leaving, from Donald Trump’s tweet.

Now here’s the thing. We learned, I think it was last week, that Don McGahn has been working with special prosecutor Robert Mueller. He’s been meeting with him, sat for what I think 30 hours total of testimony with the guy. Trump has been telling McGahn everything since he came into office because he thought he was his lawyer, but he’s actually just the lawyer for the Office of the Presidency, reports came out earlier this week, saying that McGahn and other White House lawyers were preventing Donald Trump from firing Jeff Sessions and thereby Robert Mueller, so Trump was a little angry with him.

He felt betrayed, he felt that he had been duped and so he decided to fire him via Twitter. Here’s what I love about this story. I feel a little bit of sympathy for Don McGahn; he’s not a hardcore Trumper, he’s a guy who worked in the White House, and the job of the White House Counselor is not to be loyal to the President, it’s to be loyal to the office itself, to the prestige of it. And that’s what he’s been doing. And that’s why he’s been talking to Robert Mueller. But, we have seen how horrible Donald Trump is at hiring people so I can only imagine that he is going to replace Don McGahn with someone who is completely incompetent, wholly inept and doesn’t understand the law whatsoever.

So this is going to backfire on Donald Trump; this is going to end very badly for him, as most of his firings have. Any time he gets rid of somebody who’s smarter than him, things seem to go downhill from there. And that’s exactly what’s going to happen with this firing of Don McGahn. But I do have to say that firing people over Twitter and having them find out that way, I mean luckily, I hope Don McGahn follows him on Twitter and didn’t see it off a re-tweet, but that is one of the most cowardly that you could ever do. What happened about the big badass in the boardroom who had no problem looking across the table at someone and saying, ” You’re fired.” Or was that just all for the show? Because in reality, not reality TV you seem to be one of the biggest cowards I think that we have ever had serving in the White House.