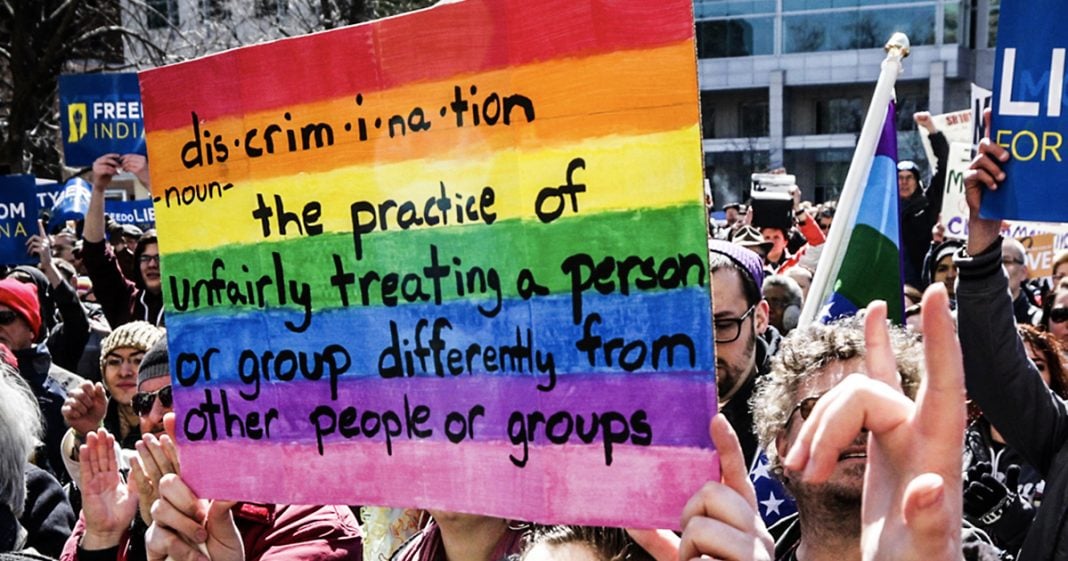 The US Department of Labor is now actively working to help federal contractors discriminate against their own workers by encouraging them to fire people whose lifestyles aren’t in sync with their religious beliefs. We’ve entered a new era of oppression in the United States – or perhaps just re-entered an old era – where oppression and discrimination is now being sanctioned by the US government. Ring of Fire’s Farron Cousins discusses this.

There’s some good news this week for anyone who happens to be a federal contractor with the US government. The Department of Labor has now changed the rules, so that you federal contractors can now discriminate against your own employees. Here’s what’s happening at The Department of Labor, this is their new announcement, they’re actually directing federal contractors, any business that’s doing business with the government, and they’re informing them that hey, don’t forget about this Masterpiece Cake bakery court decision, so you’re protected if your religion doesn’t mesh with the viewpoints or lifestyles of your employees. To put it in a simpler term that’s a little less complicated for people, The Department of Labor is sending out notices to people doing business with the government to let them know that if they have any gay employees feel free to go ahead and fire them because you’re protected under these recent court orders.

Now, first and foremost that’s not how that court decision worked. It was not a broad, expansive decision. It literally only applied to that one specific case, and the way that the prosecutors brought to the case against the bakery. That is what was at issue, and yet The Department of Labor, right now, is trying to use that as an excuse to tell their contractors that if you don’t like the fact that you’re hiring somebody, or somebody works for you and they’re a member of the LGBTQ community, or if they’re a member of a faith that you don’t happen to agree with feel free to go ahead, and just fire them, and don’t fear any repercussions whatsoever because under The Department of Labor’s new rule, under the new rule of the United States discrimination is not only legal, but it is actually embraced, and encouraged because that’s what The Department of Labor is doing here. They’re encouraging employees, federal contractors, people that we pay with our tax dollars to fire employees for being gay, or for being a different religion, or as time goes on maybe for being the wrong color. That’s what happens in situations like these.

Every time we see something like this it is a slippery slope, and it is a slippery slope that leads to broad government supported oppression and discrimination, and that is what we are living under now with this Trump administration. The Obama administration, their Department of Labor, to their credit, was actually encouraging federal contractors to diversify, to hire people of different backgrounds, or people with different lifestyles, and more importantly hire people with disabilities. That’s no longer the case. The Department of Labor today is telling their contractors, hey, make sure you keep all your employees, keep them white, keep them straight, keep them able-bodied, because we don’t want any other people like that walking around the capital trying to do business. That is the America that we live in today, it’s the America that we lived in in the 1940s and ’50s, and pretty much all the time before that, but that is exactly where the Republicans in charge want to take us back to today.