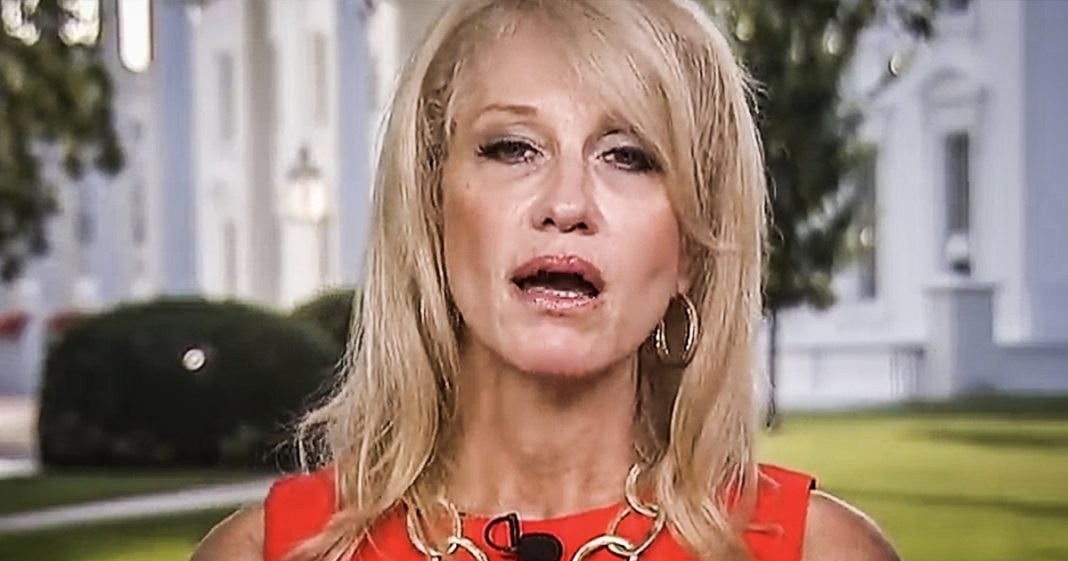 During an appearance this week on Fox & Friends, Kellyanne Conway said that she was amazed that Trump was able to win considering how rigged the entire system was against him. Not only is there no basis in reality for her claims, but her appearance was one of the most bizarre of her entire career. Ring of Fire’s Farron Cousins discusses this.

Kellyanne Conway went on Fox and Friends this week to help Donald Trump kinda run some interference from all of the horrible news that has been coming out about his administration. And during her little segment with them, not only was she behaving more erratically and just plain weirder than usual, but she also said something that was incredibly interesting. Here’s the clip.

Kellyanne C.:
But this is incredibly important testimony because it does show that Americans in the interest of accountability and transparency, do have a right to know what was going on in the other side. Sure, that woman lost the presidency, but just because she lost doesn’t mean that we shouldn’t know everything that was happening on the other side, to rig the system, the fix was in against candidate Trump.

And I’m just amazed … I’m not amazed he won, because I was on TV saying it. I’ve got all the tapes, if you want to see them, ever. But the fact is that it’s amazing that he won under the circumstances of this rigged system. People at the highest echelons of the FBI and the DOJ trying to deny him the election and then once he won, during transition, trying to deny him a smooth transition in our democratic process into his presidency.

So yes, it’s incredibly amazing that Trump was able to win this election with everything rigged him against him, right, Kellyanne? Everything was rigged against this guy, and yet he still managed to win.

I think at this point, there’s really no question that there was some rigging involved, but any of that actually helped Donald Trump to win the election. What Kellyanne is out there doing right now is trying to create the smoke screen for the Trump administration.

Now, she came on the show to talk about Donald’s latest target, and that is Bruce Orr from the Department of Justice. He wants Bruce Orr fired, now that he’s got Peter Strzok fired, Lisa Page, I’m not sure if she’s just been re-assigned or if she’s actually been fired, but now the new target’s Bruce Orr, because his wife worked for Fusion GPS and according to a Trump tweet this morning, she also speaks Russian, so that’s proof of collusion.

The president literally tweeted that out Thursday morning, she speaks Russian, so there’s your collusion. He has gone absolutely insane. Kellyanne Conway is doing everything she can to create this bigger smoke screen so that people don’t bother to look behind at all of the corruption of this administration and it’s not working. Few people are falling for it at this point.

Yes, the hardcore maggots out there? They’re falling for it. But they’re going to fall for whatever this administration tries to sell them. But average, everyday American citizens, moderates, independents, they understand what’s actually happening here.

They’re not buying into any of this. They do not believe that Bruce Orr did anything wrong, because even the FBI has had to come out and say, what did he do that was wrong? We can’t find a single thing. He got information that he thought might be worth investigating and he handed it off to the FBI to do their job. That actually was Bruce Orr’s job: to work with people, including Christopher Steele, whom he had worked with on other issues, and if he gave him anything that he felt was worth investigation, Bruce Orr took it from that person, handed it off to the FBI and that was his involvement. That was it.

That was it. And yet, somehow, people like Kellyanne Conway and Donald Trump want us to believe that this man singlehandedly influenced the election. Kellyanne Conway is desperate right now, and you can tell from her body language too. She didn’t feel comfortable saying the things that she was saying. There was something very off. If you compare that appearance to any other appearance she has given, there was something odd about the way she was composing herself there. You cannot deny that. But either way, this is a very desperate woman trying to cover up for a very desperate man who understands that the walls are closing in at a rapid pace.