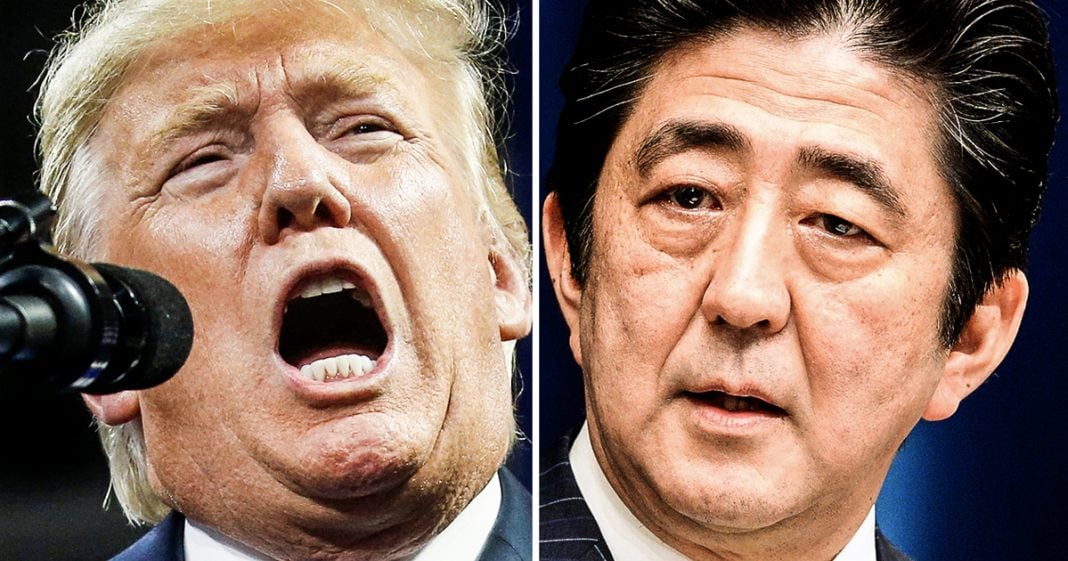 According to new reports, during a heated phone conversation with Japanese Prime Minister Shinzo Abe in June, Donald Trump allegedly grew irate and told the PM that “I remember Pearl Harbor.” Not only was Trump not alive at any point during WWII, but even if he were, that event had absolutely nothing to do with the topic the two men were discussing. But this is the level of stupid that we have to deal with in the White House, as Ring of Fire’s Farron Cousins explains.

The Washington Post is reporting on a very bizarre telephone call that took place between Donald Trump and Japanese Prime Minister Shinzo Abe back in June. According to those who were present for the phone call, Donald Trump erupted in a screaming fit against the Japanese prime minister, and at one point yelled, “I remember Pearl Harbor.” Now, according to those who were in there when the phone call took place, Trump was angry about the fact that Japanese citizens aren’t buying enough US goods, but US citizens are buying a lot of Japanese goods. That made Donald Trump mad. He decided to take it out on the prime minister and yelled, “I remember Pearl Harbor.”

Let’s get something straight real quick. Donald Trump was born in 1946. Pearl Harbor was bombed on December 7th, 1941, so that was five years before the man was born. He wasn’t even born during World War II at that point, so there’s no chance of him actually remembering Pearl Harbor, unless he was talking about that movie with Ben Affleck, which I seriously doubt he was. Nonetheless, even if Donald Trump had been alive at that point, what does that have to do with the Japanese buying US goods and the US not buying Japanese goods? The answer is absolutely nothing, but this is the kind of mad man psychopath that we’re currently dealing with in the White House. He has no idea how to conduct himself so that he doesn’t come across as a complete jackass when talking to other world leaders.

The story goes on to talk about the fact that Shinzo Abe is actually one of the people Donald Trump actually likes. He’s one of the few world leaders that Donald Trump does not insult, he does not talk bad about, according to aides inside the White House. Everybody else, yeah, they get their fair share, but not the Japanese prime minister, so I guess that’s good for him. And it also said that Trump frequently says incorrect things to the prime minister and then the prime minister waits patiently for Donald Trump to stop talking, and when he sees an opening, he will gladly jump in and offer a rebuttal to correct the president.

So, for the most part they actually have a pretty decent relationship, I guess, but it seems more like Shinzo Abe is actually just trying to wait out the Trump presidency and not make any waves with the United States. But if Trump keeps behaving like a temper tantrum throwing toddler, it’s going to be very difficult for people like Shinzo Abe or any other world leader to ever want to deal with the US again.