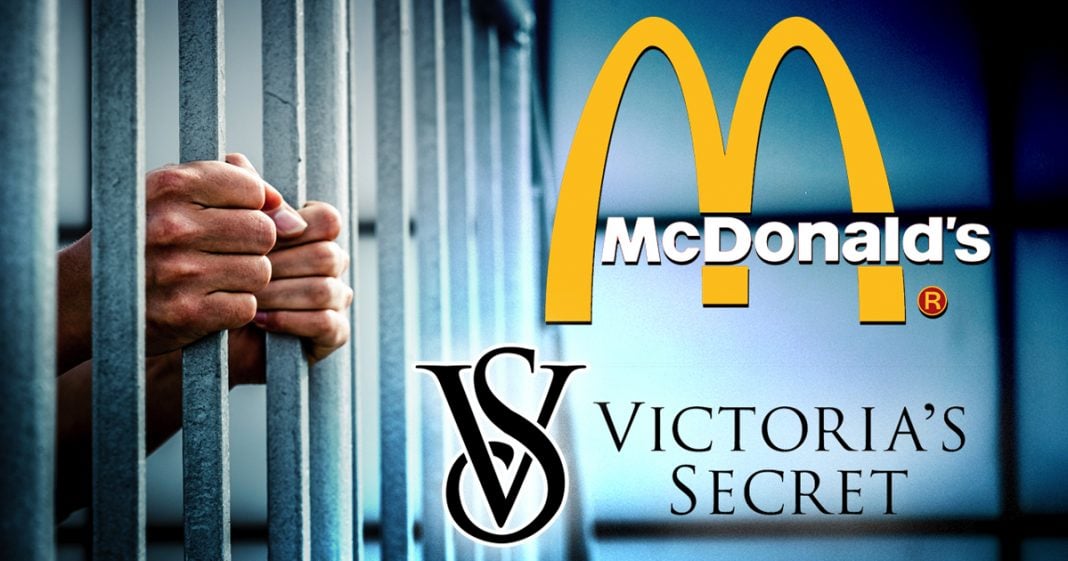 Via Boom Bust RT America: Who’s benefiting from inmate labor? Mollye Barrows is back as she breaks down just who profits from prison labor.

Bart Chilton: The other day we told you about American prisoners in more than a dozen states protesting poor labor conditions, among other issues. Prison labor is a billion dollar a year business, and many inmates say it amounts to modern-day slavery. As the debate goes on, some businesses, big businesses, are making a profit on the circumstances.

Here with more is Mollye Barrows, legal journalist with the National Trial Lawyer magazine, who joins us from beautiful Pensacola, Florida. Mollye, thank you for being with us. I mean, what sparked this whole thing?

Mollye Barrows: Well, it was the riots, those deadly riots, at Lee Correctional Institution in South Carolina earlier this year. Seven inmates were dead, dozens more … well, actually, about 17 more were severally injured. Inmates now through the Jailhouse Lawyers Speak, it’s a group of inmates that are basically leading this strike, an organized group, and they say enough’s enough, that the conditions, the living conditions, are poor in prisons across the country, that violence like what they saw in South Carolina is common at other prisons across the country.

They also want to bring attention to the fact that not only are living conditions in prisons terrible, sentencing structure is terrible, unfair sentencing, racial discrimination, and one of the big ones is they basically feel like modern-day slaves, that they’re being forced to work for pennies on the dollar, like some making less than a dollar a day, or right around a dollar a day. Federal law says they have to work. Federal law says federal prisoners in fact have to work. A lot of times they’re doing menial work, custodial type jobs, but a lot of times companies are hiring them as well and using some of this labor to profit. These inmates are saying, “Hey, give us what’s fair. If we’re going to be serving our time, then don’t treat us like modern-day slaves.”

Bart Chilton: Yeah, I mean, they have to have basic human rights, but the other hand is they are prisoners. But I am curious, and I’m dying to know this, when we first covered this story as a headline, which businesses are profiting from inmate labor and how are they doing so, Mollye?

Mollye Barrows: Well, it’s really interesting. I did a lot of online searching, I looked through a lot of other articles that have covered this particular issue. Career Addict, which is a website that basically helps people with job searches, had an article that listed the seven companies as of last year that were making the most or were also profiting off prison labor. Again, these are companies that are making lots of money and they’re getting labor at a discount for a lot of smaller services. Some of the companies they listed including McDonald’s, which was making uniforms and things like straws. They talked about other companies including American Airlines hiring prisoners that would answer their call service center, their call center. Microsoft, Wal-Mart, there were whole list of companies and some of them do business directly. I mean, you’ve heard in recent years companies like Victoria Secret and Whole Foods received a little criticism in the press about doing business with prison labor in order to cut down on their labor costs, but there’s another way that these business go about doing business with these prisoners as well or with these prisons, I should say.

The American Legislative Exchange Council, I had not heard of this group before, it’s an organization that’s made up of … voluntarily of state legislators. They influence everything from sentencing laws that have … impact inmates, as well as they help with legislation that allows inmates to manufacture these products and these services. They have a direct hand in passing legislation that makes it easier for these companies to use these prisoners for their labor.

Going back to your point, I mean they are prisoners, they are required to work. I don’t think anybody would disapprove of them making the most of their time while they’re there, but the other side of prison, which often gets neglected and ignored, is that it’s supposed to be about rehabilitation. A lot of these jobs that they’re using these inmates for are not giving them skills that are going to prepare them for life on the outside.

Ideally, most of these inmates are going to be back outside again, and they’re already being nickeled and dimed and charge for everything inside those prison walls in order to get food from the commissary, in order to email their relatives. All sorts of services that, obviously, we take for granted on the outside are available on the inside for a fee, and then they’re getting paid pennies on the dollar by corporations or by the state that they’re working … that they’re living in. In essence, they come out either in debt or at zero, or without a lot of money and they can’t rebuild their lives like that. If we’re going to put them to work, at least let’s put them to work doing something that’s going to be of value.