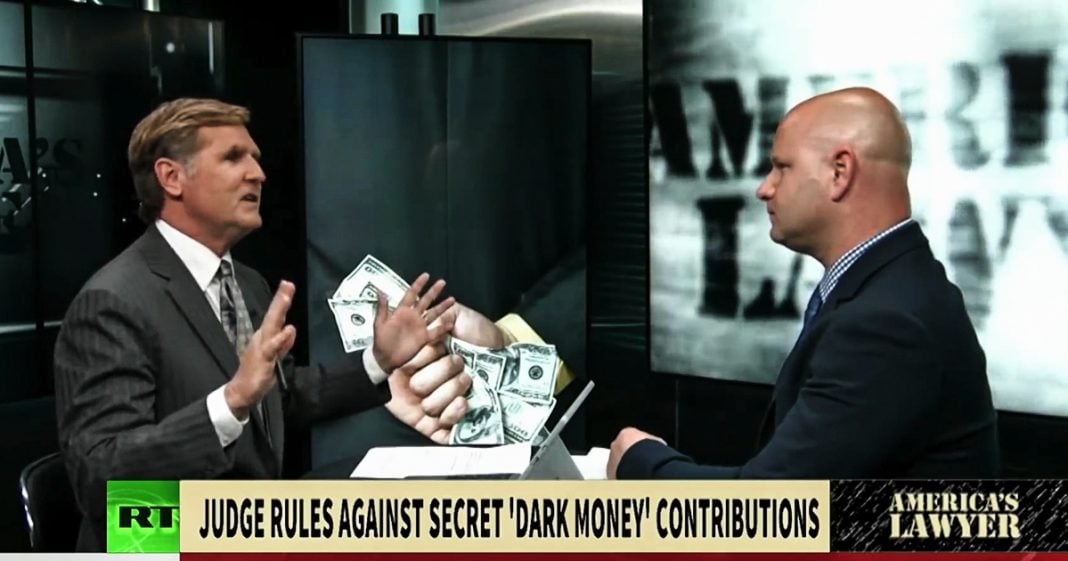 Via America’s Lawyer: Mike Papantonio and Trial Magazine Executive Editor Farron Cousins discuss how a recent court ruling may take away the veil of secrecy and reveal who is buying our elected officials.

Mike Papantonio: Voters across the political spectrum, Republicans, Democrats and everything in between agree that corporate money is destroying our democracy, and they want that money gone. Late last week, a judge didn’t get rid of political money, but he did decide that these donors can’t remain anonymous any longer and that Americans have a right to know who’s buying their elected officials. Joining me to talk about this and other major stories is Farron Cousins, executive editor of The Trial Lawyer Magazine. Farron, important story, the problem is it’s just started its way up the appellate process.

Mike Papantonio: What bothers me most about this story is this should’ve been decided in 2012 when Karl Rove. These aren’t my words, but Karl Rove was broadly known as the turd blossom. The turd blossom had a plan and his plan was to get secret money into elections where we don’t know where the money came from. That was tested. FEC says yeah, that’s fine. This is back in 2012. The election commission says no problem here. We’re going to allow it. Pick it up from there.

Farron Cousins: Well, the group, CREW, Citizens for Responsibility and Ethics in Washington, back in 2012 when Karl Rove was doing this Crossroads GPS and the other Crossroads groups, they filed a complaint, challenged this, and it took six years for this thing to finally come to a trial really. The judge last week said you know what, this is correct. You have to disclose who is donating to your group because you’re using your group to essentially fund politicians, you’re funding these political ads. We have to have some kind of transparency in this country. Yeah. If they donate more than $200 in dark money to any group out there, we have a right to know who they are. And that’s huge.

Mike Papantonio: What they’re worried about, obviously you’re a corporation like Exxon and you’re giving money to some political hack who votes for you all the time. Exxon is worried you’re now going to target that political hack. There’s going to be ads where you see his picture, these pictures up on a screen telling the story about how they’re pumping money into elections to buy politicians. That’s what they’re afraid of. CREW, to their credit, said you know, there’s one way to stop all that and that is kind of politics in sunshine. Let’s shed a light on it. Let’s see what’s really happening. What do you think the effect of this is, the net effect?

Farron Cousins: Well, I think right now, as you mentioned, this thing is going to be appealed all the way to the Supreme Court. There’s no question about that. Right now, this is good, especially heading into the midterms. We need to know what these little super PACs who run these ads on behalf of candidates, we need to know who’s funding this, which corporations, which power players out there are really pulling the strings. In the next couple months, as long as this doesn’t get an emergency appeal up to the Supreme Court and get overturned, we could see a little bit more transparency. As you said, it’s not going to stop this corporate money, but at least now we know when we see an ad and it says funded by Crossroads GPS.

Well, who is funding Crossroads GPS? We don’t just need to know that they paid for it. We need to know who is paying them.

Mike Papantonio: Okay. Reality check. Okay. Reality check. We got Kavanaugh probably going to come into the Supreme Court. It’s going to be a super majority of conservatives. By the time this is all over, Ginsberg says I’m holding on for another five years. Ginsberg ain’t going to be there for five more years. I can just tell you that. He’s looking at this super majority. Case like this comes up, we look at Citizens United again, don’t we? Isn’t this just a repeat? Citizens United says you can give as much money away as you want. Now, this case says yeah you can do that, but it can’t be in secret. Supremes will take that and they’ll say no, it’s okay to do it in secret. That’s my call. Got about 30 seconds, what’s your call on it?

Farron Cousins: I think we could be looking at something similar, but I think at the same time as long as this isn’t limiting how corporations can give, we may see a couple of the people who’ve occasionally surprised us. We might have a Roberts say you know what, give all you want, but tell us who you are.