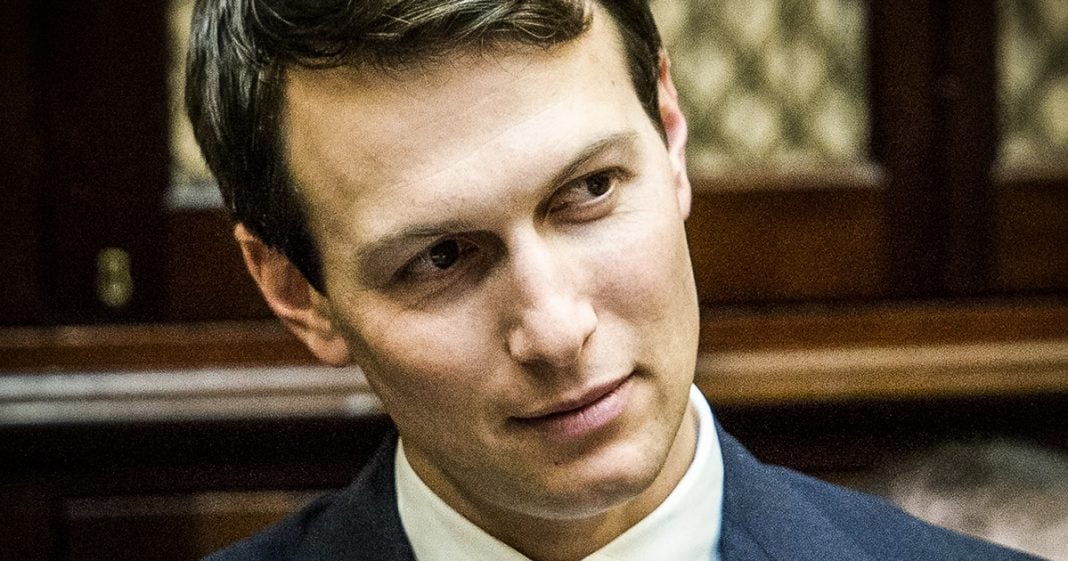 Jared Kushner and his family’s company have been fined a paltry $210,000 for filing false paperwork with the city of New York so they could kick poor people out of buildings that they purchased. Not only is this a pathetically weak fine, but this kind of scandal just a few years ago would have ended someone’s career in the White House, but thanks to the Trump family of corruption, this kind of activity is now just commonplace. Ring of Fire’s Farron Cousins discusses this.

Jared Kushner and his family’s real estate company has been fined $210,000 by New Your City regulators because they continuously filed false documents with this city. Specifically they filed 42 different false applications within the city claiming that the buildings they had just purchased that they wanted to renovate, turn into high price condos and flip for a quick profit, they claimed that those buildings had absolutely no rent control tenants. And because they filed the paperwork saying that they had no rent controlled tenants, they were able to go in, do all of this construction and even in some cases, kick people out of their homes in New York just so the Kushner family could make some more money. $210,000 but they made millions of dollars in profit off of these lies. That is a pathetic fine for a pathetic human being in Jared Kushner. Kushner did personally submit some of these applications, so he is directly implicated in this particular little scheme here.

And this one building that they’re currently being fined for is not the first time that Kushner has done this. There’s also been other reports in recent months talking about how Kushner bought other buildings and since he couldn’t kick those tenants out, he just made their lives a living hell, allowed construction workers to enter people’s apartments unannounced and without being given a key by the tenant at all times of day, when they were in the shower, while they were asleep, while they were sitting and having dinner with their family. Kushner is an absolute scumbag. By far one of the least qualified people currently serving in the entire Trump administration. And $210,000 as a fine, off a project that they made millions of dollars from, that’s not even laughable for this family. I mean, that’s pocket change at this point and it is absolutely disgusting that this is what the regulators thought would be a fair fine considering people lost their rent controlled apartments and are now being screwed out of higher monthly rent payments because of a guy like Jared Kushner.

A few years ago, I mean, in basically all of the time before that, a scandal like this, finding out that somebody who was a top advisor to the President was ripping off people in the private sector, was scamming them, filing false documents, this would have been the end of their career in the White House. But not under Donald Trump. This kind of corruption is embraced and Jared Kushner, being Donald Trump’s son in law is embraced more than others. This man should easily be in jail. But instead he’s walking around free on White House property, getting a salary paid for by US tax payers.