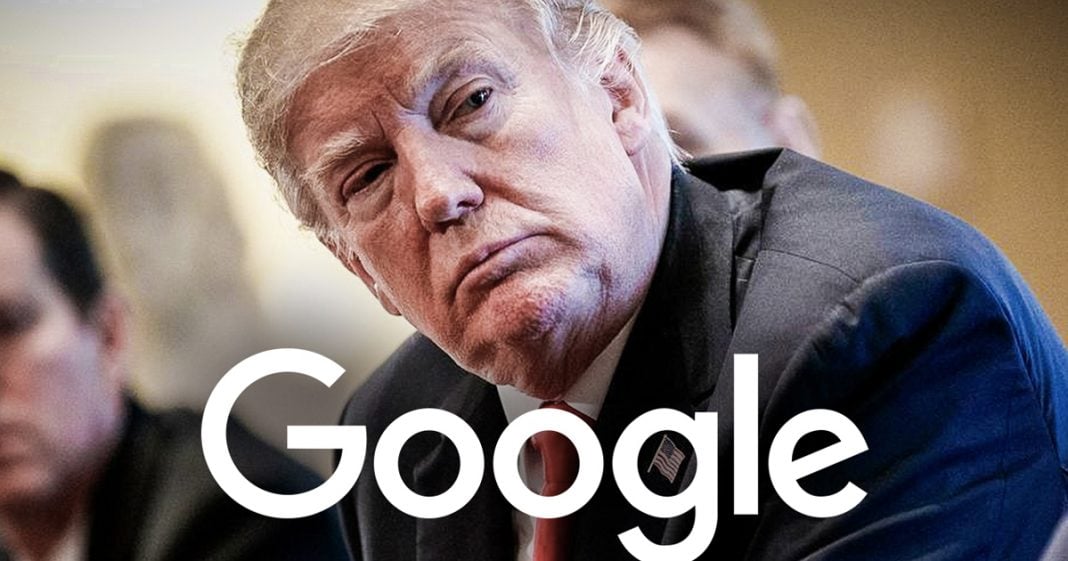 Donald Trump believes that Google is censoring positive news stories about him and promoting nothing but anti-Trump stories. Not only does this old man not understand how Google searches work, but the investigation that he’s wanting to launch is highly unethical and borderline illegal. At the very least, it would represent an egregious abuse of government power and overreach. Ring of Fire’s Farron Cousins discusses this.

Well, President Trump’s pissed off at Google now. So I guess I we got to do something about that. At least that’s what the administration says they’re going to do. Economic advisor Larry Kudlow, yesterday, Wednesday said that the White House is considering investigating these media companies, Google specifically. Because they believe they’re somehow censoring positive news stories about Donald Trump. And all of this came about from a tweet that Donald Trump had sent out earlier and the day.

And here it is. It’s a two part tweet, because he had a lot to say about this. “Google search results for Trump news shows only the viewing reporting of fake news media, in other words, they have it rigged for me and other so that almost all stories and news is bad. Fake CNN is prominent. Republican, conservative and fair media is shut out. Illegal? 96%% of results on Trump news are from national left wing media. Very dangerous. Google and others are suppressing voices of conservatives and hiding information and news that is good. They are controlling what we can and cannot see, this is very serious situation. Will be addressed.”

First of all old man, let me explain to you, you don have to type in Trump news. Okay? You don’t. You can type in Donald Trump, you can type in President Trump and just hit search. At the top there’s going to be a little section that’s going to have the news in it, or you can just click the little tab that says news. Then any news story is going to have your name.

So you basically are wanting to launch an investigation into Google because you don’t know how to Google things properly. Understand folks, that is what this about. Donald Trump sucks at using an online search engine, so now we’re going to have to waste even more government resources to investigate why the President can’t search for things online. We’ve already gone through hearings in the House of Representatives, maybe the Senate, I don’t actually remember which one it was. But good God, the Senate definitely with Zuckerberg. They have gone through, they have brought in diamond and silk to testify about social media censoring them. And how horrible all of these media outlets are. And they’re so bad and they just banned Alex Jones. Twitter is shadow banning all of these horrible conservatives online.

You people are nuts. You’re absolutely bonkers right now. Because you put out a tweet saying you’re being shadow banned and it gets 20,000 re-tweets. Not exactly a shadow ban if everybody can see it. This conspiracy, as it were, is actually being pushed by right wing media. Some of the horrible sites, PJ Media, Daly Caller, Breitbart, they’re pushing these conspiracies that have absolutely no basis in reality. But as we just found out from Donald Trump with his self tweet there that he talked about, he doesn’t know how to Google. And I’m assuming some of these other morons in the Republican party who claim that they’re being shadow banned, or their names not showing up, it’s probably because they just like Donald Trump are too stupid to know how to search for things on the internet.

But hey, at least we get to waste more time and more government money chasing Donald Trump’s crazy conspiracy theories.