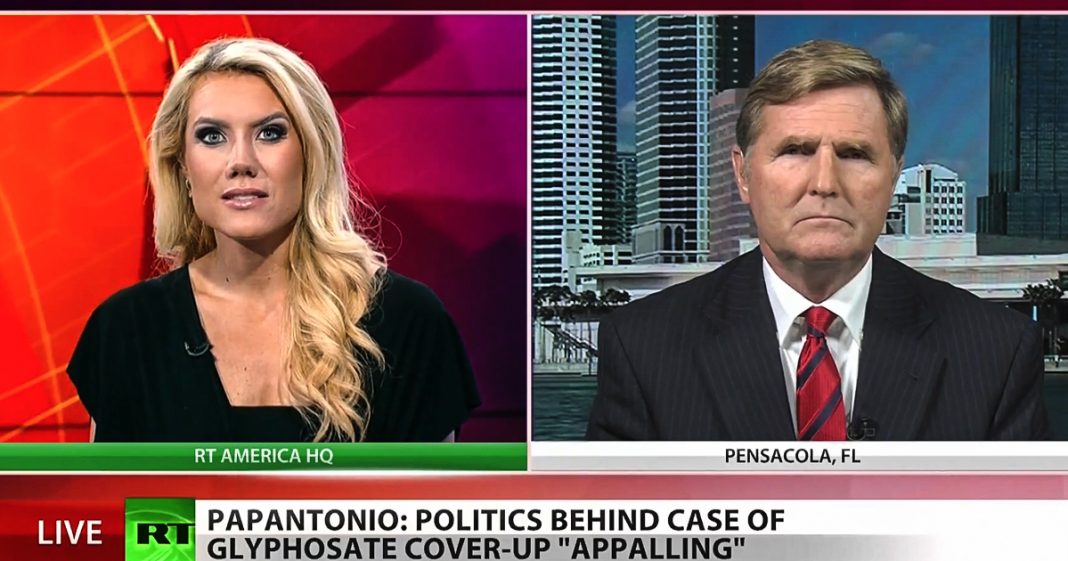 Via RT America: We’ve been covering and reporting on glyphosate and the potential dangers of weed killer Roundup. America’s Lawyer Mike Papantonio joins Natasha Sweatte with an update.

Natasha Sweatte: And for more, we’re joined by Mike Papantonio, host of Americas Lawyer, here on our team. Mike thanks so much for joining us today. And so, DeWayne Johnson, the man who won the lawsuit against Monsanto was told that Roundup was “safe enough to drink,” yet now, we’re hearing the chemicals from their product will kill at least 20,000 people from types of cancer in the US annually, so how is this product still circulating the market, Mike?

Mike Papantonio: Well, it’s because of fraud. I mean basically, the politics behind it is appalling. When you take a look at the politics, oddly enough the democratic regime has done most to keep Monsanto out there with their product. They’ve protected them at every turn of the road. The Department of Justice should’ve been looking at this a long time ago. But, politics is tough to overcome when you have a multi-billion dollar corporation that gives too much money to politics. That’s the quick answer to that. That’s why we’re just now learning a lot of this.

Natasha Sweatte: And the issue now is that it’s in everything, from cherries to cereal, Roundup has been around since 1974 and is now causing cancer and birth defects, and as you mentioned, many other things. We now know, Dewayne Johnson is dying as a result of the chemicals found in Roundup, because he was directly spraying them at the schools he worked at, but what about everyday people like us? How would we know that a potential future condition is a result of Monsanto’s product?

Mike Papantonio: Well, first of all, throw your Roundup away. Don’t use it, this is a product that it’s inhaled, it moves through your body systemically from the skin. They’ve known about this for a long time. They’ve understood that it’s even bio-accumulative. What it has the ability to do is build up in your body. As a matter of fact, you could go anywhere in the world right now, ask somebody to give you a urine test and they’re probably going to find glyphosate in there.

Company has known about that a long, long time. The thing on the food is an interesting issue if I were advising the people who actually make these cereals they really had better protect themselves. First of all, by not buying products that are contaminated with glyphosate, but they already have a problem if they … the best way to protect themselves is to initiate lawsuits against Monsanto for lying to them. That’s really the issue. Monsanto and Bayer now, have lied to everybody about what they had in their own file cabinets.

I have seen what they have in their file cabinets. I took depositions of people about what they have in their file cabinets. And they have known, for decades, that this has the ability, not just cause cancer, but it causes birth defects. And when I questioned them, in depositions, when I question them about what they knew, the position was, “Well, we were simply told by the people at the top that this posed no risk at all. As a matter of fact, we were told it was safe enough to drink.” While they were telling that the America people, while they were telling that to people who were using glyphosate in things like food products, they knew that their head toxicologist, the very person at the top of the food chain, that knew everything about the dangers of glyphosate, they knew that toxicologist had warned them, to say under no circumstances should you tell people that this product will not cause cancer, because we haven’t done the studies to prove that.”

So this is just the beginning. This is a horror show for Monsanto. This is an absolute horror show and now, Bayer has acquired Monsanto and you have to ask yourself, “Who were the lawyers that advised them that, that’s a good move,” because those lawyers probably need to call their E&O carriers. Bayer had ever reason know when they bought Monsanto that this was a phonied up lie. And now the trick is getting it off the market.

Natasha Sweatte: And do you see similarities with how the tobacco industry denied how harmful their product was and now, Monsanto, as you mentioned, skewing scientific research to make their product sound safer than it really is?

Mike Papantonio: Well, the tobacco industry, as you know, we handled that case too. And so what we found there is that they were able to, the tobacco industry did the same thing Monsanto did. They went out and hired, what we call biostitute in this business. A biostitute is somebody working at a university, they’ll write any literature that needs to be written for the right price for somebody. So there’s a lot of similarities. A lot of similarities.

Natasha Sweatte: Interesting. Mike Papantonio, we really appreciate your insight, as always. Thank you so much.