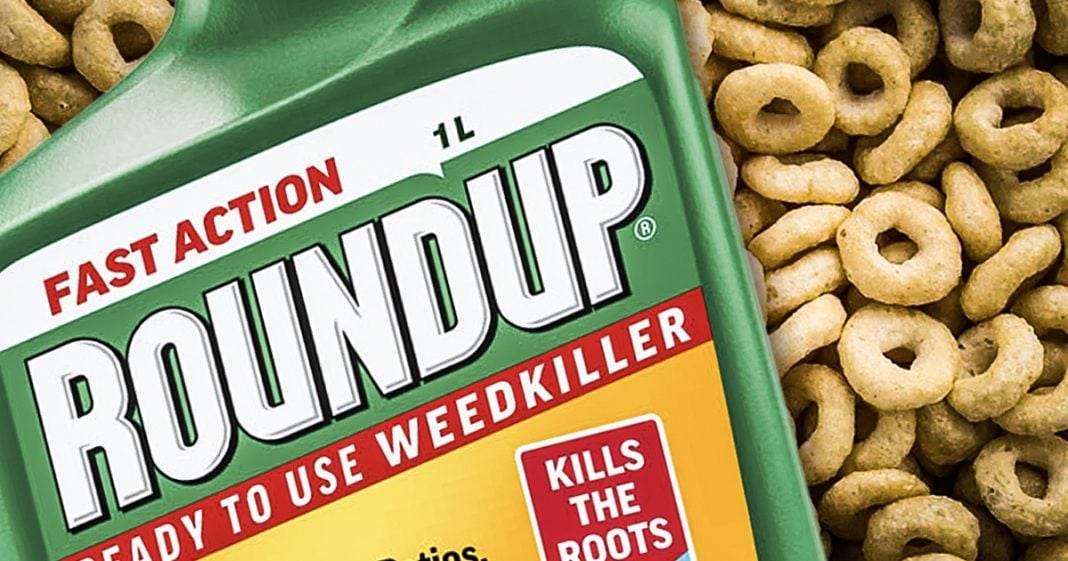 Study after study released this year has shown that some of the most common foods in America are contaminated with Monsanto’s Roundup. Everything from cereals to baby formulas and beyond have been found to have glyphosate in them, the main ingredient in Roundup that has been linked to various forms of cancer. So where is the EPA when you need them? Ring of Fire’s Farron Cousins discusses this.

Another report came out recently, this time by the Environmental Working Group that showed that glyphosate, the main ingredient in Monsanto’s Roundup is present in nearly all oat-based breakfast foods. Meaning if you’ve had a granola bar, if you’ve had a cereal really of almost any kind, especially General Mills seems to be exceptionally bad with it, then you’ve eaten Monsanto’s Roundup poison. A couple weeks ago, jury found that yeah Monsanto covered up the link between Roundup glyphosate and cancer, specifically Non-Hodgkin’s lymphoma in that particular instance. They’re facing thousands of more lawsuits that claim the same things. Independent investigations have shown a link between glyphosate and certain types of cancers.

Yet, Monsanto is out there telling us that no all that science is wrong. You need to only look at the science that we Monsanto paid for. We also paid for this little front group, the Glyphosate Task Force, to go out there and spread rumors about all of the legitimate science showing hoe dangerous this thing is. Monsanto has been engaged in a decades long coverup of one of their biggest blockbusters. The biggest blockbuster really they’ve ever created. I think they make about $4 billion a year just on Roundup. Yeah, finding out that this thing can give you cancer even after short exposure times would probably put a dent in that $4 billion a year profit, but that’s what’s happening. According to this new report by the environmental working group, even if you don’t go to the store and buy Roundup, even if you don’t put it in your yard, if it’s not used in the schools or playgrounds or offices where you work, you could still be getting an unhealthy dose of glyphosate every single day just by eating oat-based foods.

The reason for that is because GMOs. The reason we have GMOs is because Monsanto wanted to create organisms, plant based organisms, that could resist Roundup. It would kill the weeds, but not the crop. Because of that, they can now just spray Roundup all over everything and it won’t kill the plants. It’ll just kill the people who eat the plants or who eat any food that that plant is turned into down the assembly line. That’s why oats and grains and things like that found in food that we eat every single day, that’s why this stuff is spreading. Baby formulas. Here’s some of the list from the Environmental Working Group here. Quaker Simply Granola, Giant Instant Oatmeal, Quaker Dinosaur Eggs Instant Oatmeal, Quaker Steel Cut Oats, those are the ones that had the highest levels.

Again, we’re finding this stuff in baby formulas. We’re finding it in baby foods. We’re feeding it to our infants who already have not quite as good immune system as we do, so there’s no telling what these glyphosate chemicals are doing not just in terms of causing cancer, but also neurological illnesses in these children. Monsanto doesn’t want you to know about it. They have spent millions upon millions of dollars to cover this up, but with the recent jury verdict, it’s looking more and more increasingly likely they’re not going to be able to coverup these dangers forever. Finally, all of these independent groups out there are doing the studies and running the tests that Monsanto didn’t ever want them to and they’re making these results public so that we can make an informed choice when we go to the grocery store.

Do you want to buy a cereal with Monsanto’s poison in it or do you maybe want to pick a different brand? Because that’s all we’re asking for. Let us choose if we want to ingest your poison because I promise you, nearly all people in this country would say “You know what, I’m going to go with the non-poisoned cereal.”