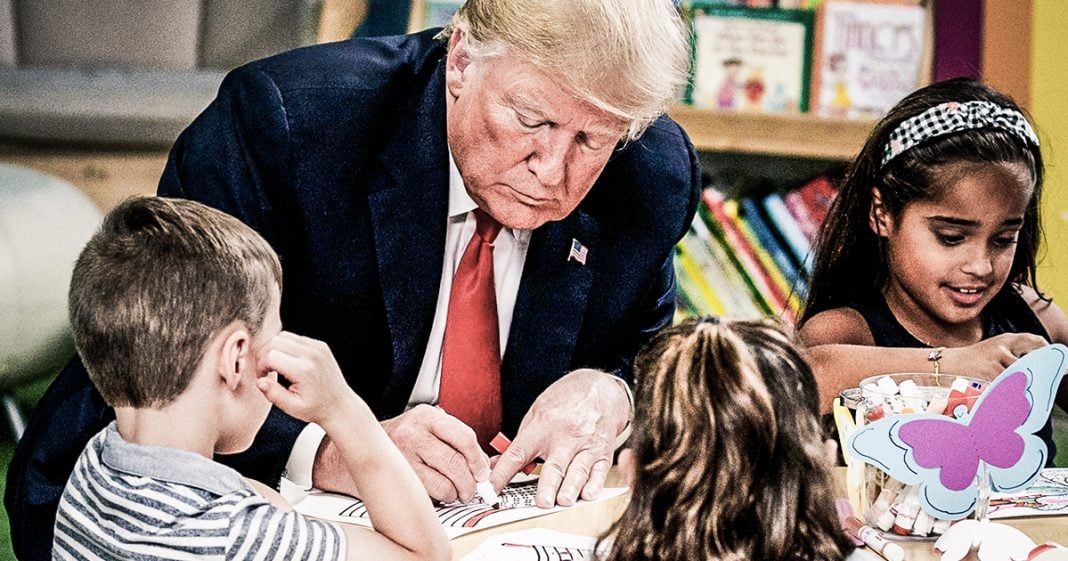 During a photo op this past weekend, Donald Trump was given the seemingly easy task of looking like a human being for a few moments by coloring pictures with children at a hospital. And sure enough, he managed to screw it all up by coloring a picture of the American flag incorrectly. Ring of Fire’s Farron Cousins discusses this.

So by now, everybody obviously knows that Donald Trump had a really bad week last week. So, to kind of cap things off and make him look a little bit more like a human being, all he had to do Friday afternoon was sit with some children and color. That’s it. It was a great little photo-op opportunity there for the President. You know, get some good publicity, be there with kids, smile, be happy, color a picture.

There’s almost no way you could screw that up. And yet, this idiot somehow managed to screw it up because Donald Trump apparently doesn’t know what color the stripes on the American flag are, and he colored one blue. You can clearly see in the pictures this man colored a blue stripe on the American flag.

Now, obviously this wouldn’t be such a big deal if he hadn’t kind of hinged his entire campaign and Presidency on attacking people who allegedly disrespect the flag. And you don’t even know what color it is? And you can also see in the other picture, he ends up looking very confused about his little blue stripe, looking over at the girl’s paper next to him to see what she got for it, so maybe he can copy her. And again, all you had to do was color.

All you had to do was sit there with these children, not be a complete monster for a few moments, and for the love of God, don’t color the American flag the wrong color.

And he couldn’t even do that.

Now this was at the Nationwide Children’s Hospital in Columbus, Ohio, and then later on in that evening, at a little rally-type thing in Ohio, he once again went after NFL players for allegedly disrespecting the anthem and the flag. You know what happens to be more disrespectful to the American flag? Making it the wrong color.

Now, I know a lot of people don’t think this is a very serious or important issue, and to be honest, it probably isn’t. But it gives us just yet another glimpse into how incompetent this man truly is. You know, if you were painting a Christmas tree, and you wanted to paint it blue instead of green, go for it. Maybe you wanted to make a yellow house in an area where there are no yellow houses. Fine. But you kind of have to stick with American flag colors when you’re coloring the American flag, and yes, there’s blue, but there are no blue stripes.

I actually saw some conservatives on Twitter trying to justify it and say, “No, no, no, no. He was actually trying to draw the thin blue line police version of the American flag,” which if that were the case, then he wouldn’t have also drawn the red stripe on the flag.