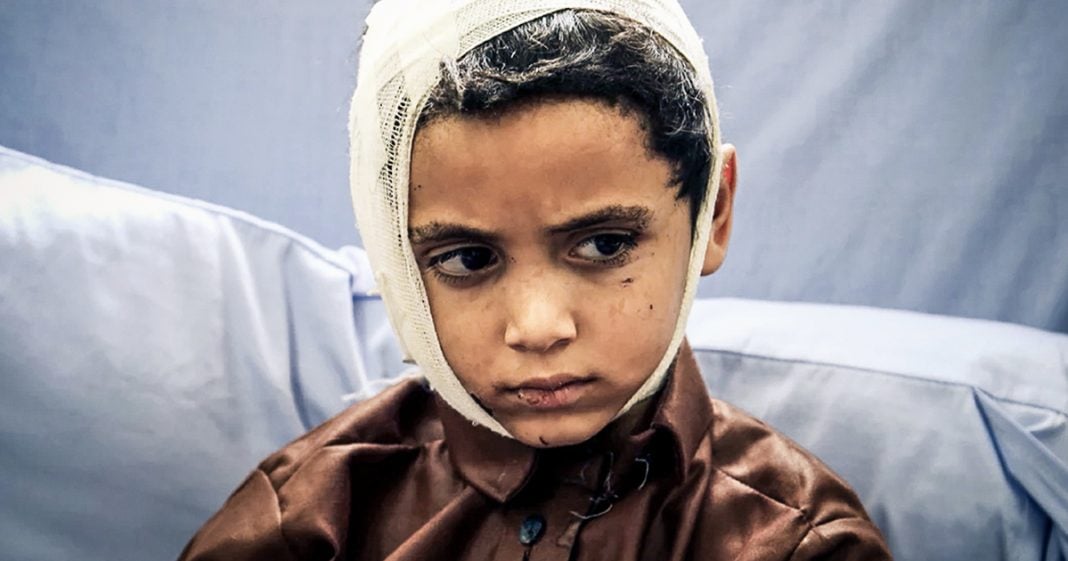 Dozens of children have been killed in Yemen in recent weeks by bombs made in the United States and supplied to our allies overseas. The United States is complicit in the murders that are taking place, and the corporate-controlled media has barely made a peep about what is happening. Defense contractors are making a killing off of killing, as Ring of Fire’s Farron Cousins explains.

In the last four weeks, missiles and bombs made here in the United States by U.S. defense contractors have killed at least 70 children over in Yemen. 70 children in one area of the world at the hands of U.S. defense contractors, and that includes several weeks ago when a missile hit a school bus and killed 44 children, most of whom were between the ages of 8 and 11. Those children were actually on a celebratory field trip to celebrate the fact that they had just finished all their summer courses. They were celebrating. They just hit a major accomplishment. They were done. They could take a break. And U.S. made weaponry killed them because we’re selling those weapons to Saudi Arabia.

Two weeks later, last Thursday, actually, 26 children and 4 women were murdered, again, by U.S. made weapons while trying to flee violence in Yemen. Once again, those weapons were made by U.S. defense contractors and launched by our allies in the Middle East. Starting to see a pattern here, aren’t you?

U.S. made weaponry is killing children all over the planet, and we’re doing absolutely nothing about it. I mean, CNN, the warmongering network that’s never met a conflict they didn’t like, even they had enough courage to come out and speak out against what the United States is doing oversees, murdering children. We may not be the ones pulling the trigger, but we’re the ones handing them the trigger to do it. They’re targeting school buses, school buses filled with children, to die. Why? Well, that’s really not that clear.

Is this part of the War on Terror? Is it just Saudi Arabia acting as a terror nation? That’s what it seems like to any observer at this point. Yet for some reason, in spite of their gross human rights abuses, in spite of the fact that there is no equality to speak of in that country whatsoever, we’re their ally and we give them lots of weapons. They then take these weapons and murder innocent people for no apparent reason, no discernible reason at least, but that’s what’s happening.

The defense contractors here in the United States, the Boeings, the Lockheeds, the people making these bombs and missiles, they love it because every time a missile gets fired, they got to come back and buy another one. They fire 10, they come back and buy 20. That’s how it works, and the U.S. government is more than happy to facilitate that relationship between the missile makers and the missile launchers. Right now, they’re just the intermediaries. They’re going to sell as much as they can to countries like Saudi Arabia because we want to stay friends with them for some reason, even though they’re one of the worst countries out there at this point.

Something has to change. Something has to be done. We cannot sit by while our weapons that are made here in the U.S. are being used to murder school children, but that is exactly what is happening today. There needs to be investigations. There needs to be some kind of sanctions on Saudi Arabia, starting with we won’t sell them weapons anymore. But, unfortunately, that’s never going to happen because Saudi Arabia wants our weapons almost as badly as we want their oil, and there’s no amount of child’s blood that can be shed to make us kick that oil habit that Saudi Arabia’s more than happy to supply us with.