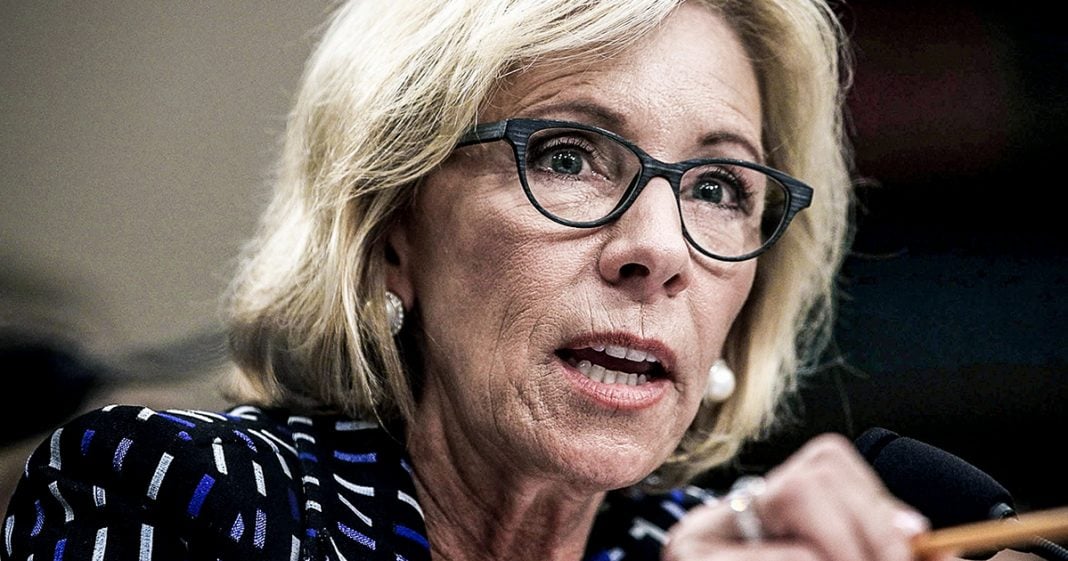 The US Department of Education is considering a proposal that would free up some federal money to arm and train teachers in this country how to kill people. This proposal comes at a time when teachers all over the country are paying more than $1,000 each year out of their own pockets on school supplies because schools are so dangerously underfunded, and the administration has actually reduced the amount that teachers can write off on taxes. But Betsy DeVos wants to carry the NRA’s water, and now she’s offering to buy them all guns. What could go wrong? A lot, as Ring of Fire’s Farron Cousins explains.

As schools all over the country get back in session within the last few weeks and the upcoming week, it’s important to remember that the Department of Education under-billionaire, Betsy DeVos, still wants to arm your teacher, and now, they’re trying to figure out a way to where the federal government can pay to give your teacher a firearm, and of course, proper firearm training. Now here’s the reason this particular story makes me angry. Teachers across this country, for years now, have been going back to work each year to under-funded school districts. They can’t afford supplies for their classroom. On average, teachers in this country spend between $1,200 and $1,500 out of pocket every year to buy supplies for their own classrooms because the districts, the states, the federal government don’t give them enough money to actually function. Of course, teachers are one of the most under-paid professions here in the United States, so $1,200 to $1,500 out of pocket each year is a huge chunk of their disposable income.

Furthermore, arming teachers will not work. I think that’s the big thing we’re getting at here. Law enforcement officials have told us this. Putting more guns in our schools is only going to give people access to more guns to do horrible things. We actually saw earlier this year where a teacher shot a student. So yeah, not all these teachers are exactly heroes out there. Some of them just were waiting for the opportunity to go in and commit an atrocity, but Betsy DeVos and the Department of Education right now are working on a plan to increase funding from the federal government down to the states to provide firearms and firearm training or teachers. We can’t give them supplies. We can’t give them pencils, and paper, and friggin’ Kleenexes for their classrooms, but we’re gonna pay for their guns.

Hell yeah. Why? Because buying all these guns for teachers is gonna bolster the NRA, which we already know is under huge financial duress, not to mention the fact that they had been infiltrated by foreign spies, but Betsy DeVos doesn’t care about that. She just wants to make sure the NRA does great, and that the gun industry does great and they get more money ’cause gun sells are slumping right now. What better way to increase those sales and the profits of the death industry than by having the federal government buy thousands upon thousands of guns and handing them out to teachers across this country who do not want them?

That’s the big takeaway here. As I said, law enforcement officials don’t think this is a good idea, and teachers don’t think this is a good idea. You know what they want funding for? Technology in the classroom, as I previously mentioned, Kleenexes, hand sanitizer, paper, pencils, pens, things like that. There’s not enough funding to provide the very basic things that children need in order to learn, but that doesn’t matter to them. Let’s go spend some money that we don’t have on guns that teachers don’t want and put them in a situation where they’re gonna be choosing between who is the bad guy in the school, and who is just somebody running because they’re caught in the crossfire? More guns equal more death. Every chart on the subject will tell you the exact same thing, and there is no reason to think that this new plan from the Department of Education would do anything other than increase the amount of death here in this country.