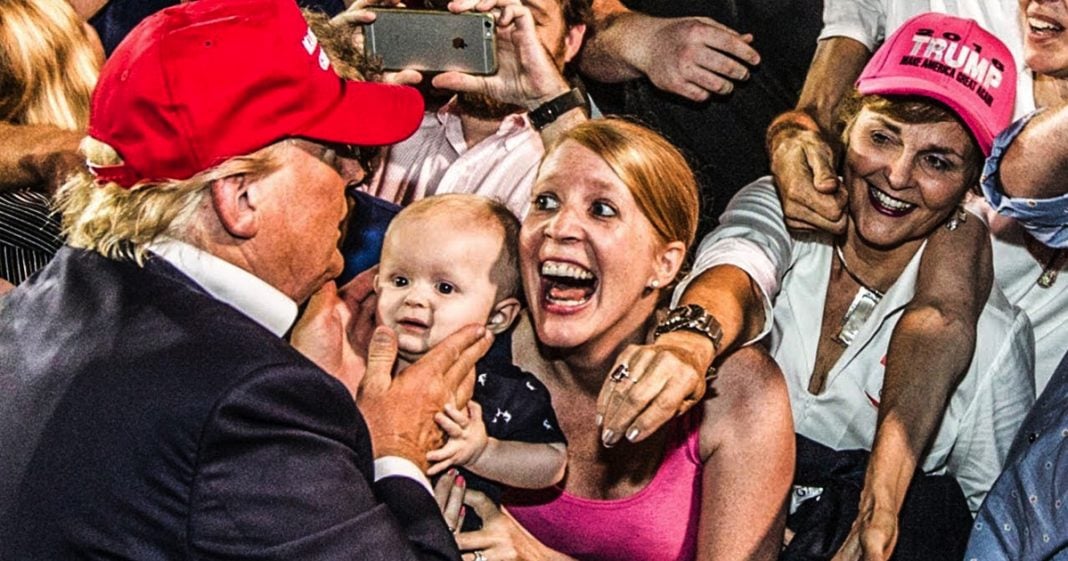 Our next question tonight comes from Alan Simpson who asks, “Love the show. I’m wondering IF anything happens to Trump and he’s forced out of office (hopeful) how extreme and angry do you think his base will react?” Ring of Fire’s Farron Cousins discuss this issue.

Our next question tonight comes from Alan Simpson who asks, “Love the show.” Thank you very much Alan. “I’m wondering IF anything happens to Trump and he’s forced out of office (hopeful) how extreme and angry do you think his base will react?”

That’s worried me from day one to be honest with you. Ever since all of these investigations began and you’ve seen Republicans, conservatives, Alt-Righters, say on Twitter, “If he gets impeached, we take to the streets.” They’ve said we need to start getting ready. We need to get ready for the second Civil War. We need to do this, we need to do that, we need to take up arms, we need to stock up ammunition. Are they going to do any of that? No. They’re cowards. But more importantly they understand what they would be up against.

I’m not trying to bait them and saying, “Oh you’re cowards, you’re too scared to do that.” No, no, no. They understand that they can’t fight off the U.S. government, the U.S. military. No matter how much you support this guy, if it comes out that this information is correct, if there was collusion, if there was any other kind of illegal activity, or money laundering, or financial schemes, or tax evasion, and he gets impeached or goes to jail. You might have some crazies out there who head to the street with their weapons but you’re not going to see a mass movement of it. There’s just not enough. We’ve seen that from the rallies. The Unite the Right Two rally 20 people showed up. Yeah, if that’s the best they can get for their little white supremacy thing that Donald Trump himself had said, “Oh they’re very fine people.” Then I don’t think we have too much to worry about the truly crazy people who threatened to take up arms if Donald Trump gets impeached or otherwise removed from office.

One last question that I actually want to address. I got this as a direct message to me on Twitter the other day. And it’s because Fox News tweeted out a clip of Charlie Kirk where he said, “If you look at all of the cities that are doing horribly in this country most of them are run by Democrats.” My simple response was, “I suggest you drive through the south. Two hours down here would debunk all of your talking points. Because yeah, we’re pretty solidly Republican down here and things suck.”

But nonetheless, that sparked somebody to send me a direct message on Twitter and say, “Hey, I saw you go after Charlie Kirk. Why don’t you ever do videos about him? Why don’t you ever attack him on there or Ben Shapiro for that matter?” And there’s a reason why I don’t do that. The biggest part of that reason is because there’s a lot of people who are far more talented than me who do a great job of taking down these little punk kids. But the second one, the second reason that I don’t do it, is because I’ve been doing this for 14 years. I have seen Charlie Kirks and Ben Shapiros pop up every single year. They’re big for a year or two and then they disappear. And then the next kid, little punk conservative comes out trying to be edgy and all these, “Oh socialism you guys suck. You’re an idiot.” It’s the same thing every time. Every couple of years a new crop pops up and you forget about the old ones. Then they desperately try to cling to some kind of relevance in politics today.

I’m not worried about the Charlie Kirks and the Ben Shapiros. I hate myself enough for doing videos on Tomi Lahren. I know she’s not going to be around forever. And that’s my point. When you do this long enough you do start to see these patterns. And you see the young conservatives pop up and they start getting a little bit of airtime here. We already seen that their stock is sliding. Tomi Lahren is already on the downward swing here. Charlie Kirk is the same way. Ben Shapiro will be headed there in like six months I promise you. They’re going to go the way of the Michelle Malkins, the Glenn Becks, Ann Coulter who’s about as irrelevant as ever at this point.

The list is seemingly endless of these people, these fly-by-night conservatives who get big funding from governments. But then eventually, and this is what’s going to happen to them, they’re going to say something so outrageous and offensive and disgusting that they start to lose even their most extreme supporters. They fall into obscurity. Their big corporate backers decide we’re not going to pay you anymore. We got this other moderately attractive woman who’s going to come say this stuff instead of you. It’s what happens every single time.

I do applaud the people who do make these videos and take the time to go through and debunk what these idiots are saying. But they’re doing a good enough job of it that I don’t have to waste my time talking about morons like these. Because we all know, we’ve had these conversations together that these kids, two years from now, most people won’t even remember who they are.

So that does it for questions tonight. But again, if you have a question you want to ask us just send it on Twitter using the hashtag #AskROF. Send it @ringoffireradio or to me @farronbalanced. We get a lot of questions but I do my best to try to go through all of them. Love responding to them so please keep them coming.