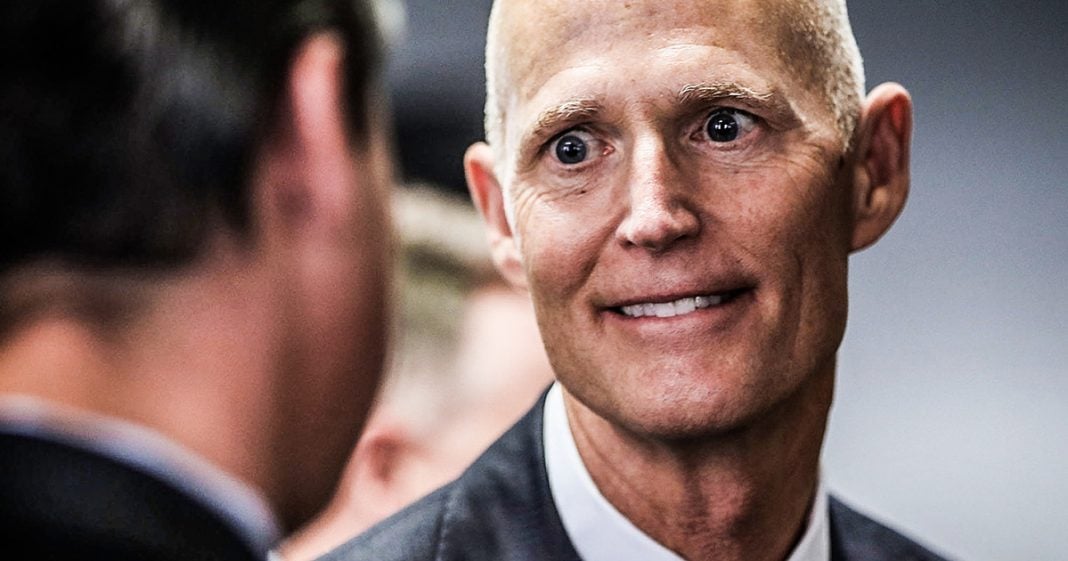 The toxic algae crisis in the state of Florida may not be capturing the headlines, but it is something very real for those of us who call this state home. And now a new report explains exactly how this crisis happened – our idiot Republican governor Rick Scott. Scott cut more than half a billion dollars from the agencies that are supposed to protect us from this kind of thing, and now he thinks he can win a Senate seat in the state? Ring of Fire’s Farron Cousins discusses this.

For weeks now, we’ve had politicians going back and forth trying to blame one another. Democratic Florida Senator Bill Nelson blames Rick Scott. Rick Scott, our Republican Governor, blames Democratic Senator Bill Nelson. The truth is, there’s a lot of blame to go around to both of those guys and many others. But according to a new report, we can kind of tip the scales on the blame game a little bit, and place roughly 95% of it, I’m willing to say, on our Republican Governor Rick Scott and his Republican policies. Because as it turns out, Rick Scott has cut $700 million from environmental protection groups here in the state of Florida.

Groups that were in charge of preventing and monitoring the spread of this toxic algae that is now choking our coastlines North and South, East and West. Rick Scott is the guy who, under these Republican austerity plans, cut environmental protection here in the state of Florida. $700 million. In a state that is 99% funded via environmental activities, whether it’s the oranges that we grow here, the potatoes, those are considered environment, because they grow in the earth, you idiots. The beaches that attract tourists from all over the world. We’re letting them be destroyed by this Republican mad man, because he wanted to save a little money.

Here’s what happened. Each year, Lake Okeechobee down there in South Florida, after the rain season hits, rises up, they release some of that water through rivers back in the gulf into the Atlantic. The two rivers that connect Atlantic and the gulf are so contaminated, so polluted, that any marine life that swims in those rivers dies. That’s how contaminated with this toxic algae they are. When Lake Okeechobee rises up, it’s also contaminated with the algae, the algae goes through these rivers out into the gulf, out into the Atlantic, goes up and down the coast all over the place killing turtles, dolphins, other marine life that fisheries depend upon. Shrimp, crustaceans, everything like that, everything dies.

You can actually get sick just from going near the water and breathing. That’s how toxic this algae is, and we do it every year. Rick Scott decided, “I’m going to cut the programs that are supposed to prevent the algae from making it to the beaches.” That’s the kind of level of GOP incompetence and corruption we have been living with in the state of Florida for far too long. Rick Scott is now, since he’s term limited on being governor again, is actually trying to run for Bill Nelson senate seat. Don’t get me wrong, Bill Nelson is horrid. This man has taken so much money from the sugar industry, who’s actually responsible for all the pollution in Lake Okeechobee and that’s where the toxic algae originates from the emissions from the sugar industry.

Most people don’t realize how powerful the sugar industry is down there in South Florida, but it’s huge. They give millions upon millions to politicians all over the South Florida area down there. Nonetheless, Bill Nelson is a tick better than Rick Scott. Rick Scott is corrupt. Rick Scott is borderline a criminal based on his massive Medicaid, Medicare fraud that his business pulled off. [inaudible 00:04:21] largest in history at that point, by the way. He only stayed out of prison because he had to plead the 5th Amendment more than 70 times in order to not incriminate himself. But now he thinks he can be our senator. And he would be partnered up with Marco Rubio.

If that were to happen, and the state of Florida, the governorship here stays in the hands of Republicans, this state is done for. This state is 100% dependent on our environment. The idiot Republicans who are being put into power by, sorry to say it, the idiot voters here, don’t seem to have a problem with that. Even when it kills our livelihood, even when it sends our loved ones to the hospital for doing that thing we all have to do to survive, breathing. But yeah, keep throwing Republicans in our state legislature and our national government. Yeah, keep seeing how that works out for you. Because there is no one in this state, Republican or Democrat, who would say that things are going well here.

If you want to look at the reason why, I suggest you start by looking at the fact that we consistently elect moronic Republicans, who we assume are going to have our best interest at heart, but at the end of the day, they will do whatever their corporate donors tell them to do. That has essentially destroyed this entire state.