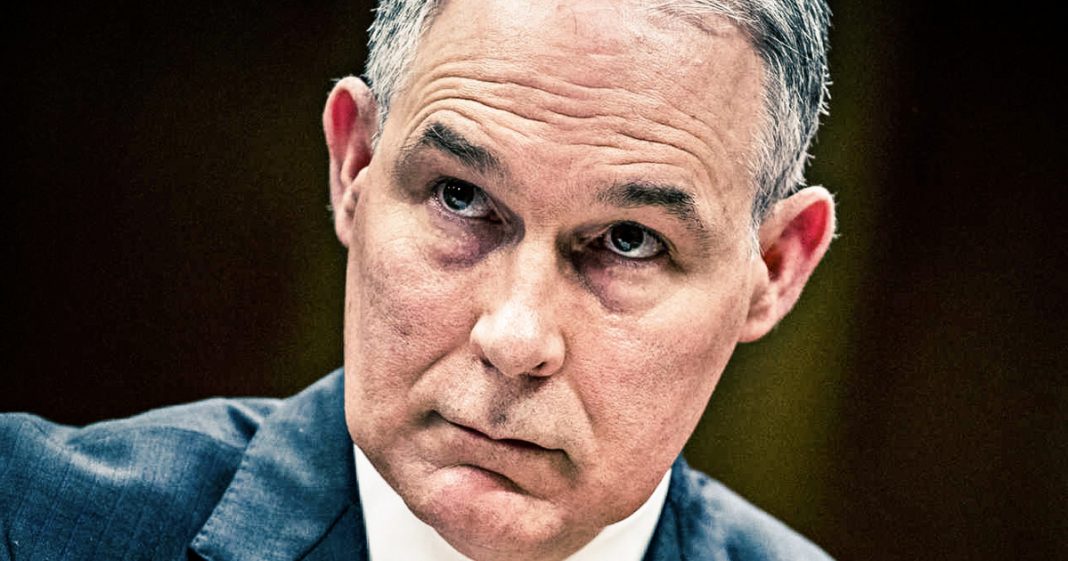 Former EPA Scott Pruitt apparently only made one single telephone call from the soundproof phone booth he had installed in his office, meaning that this single call cost taxpayers $43,000 – and it was to the White House. Pruitt may be gone, but the damage that he did at the EPA is going to take years to clean up. Ring of Fire’s Farron Cousins discusses this.

It was roughly a year ago, the news broke that Scott Pruitt, who was at the time the administrator, the director, the head of the Environmental Protection Agency, that he was spending $43,000 on a special soundproof phone booth for his office at the EPA.

Well, we found out this week just exactly how many calls Pruitt made from that soundproof phone booth. And the number is one. He made one phone call to the White House that lasted five minutes. We, the taxpayers paid $43,000 for a soundproof super secure phone booth that only saw one phone call for five minutes. A $43,000 phone call is basically what that became. $43,000 for a five minute call. Basically, we’re talking about what? Like $8,500 a minute to use this thing now?

But that’s the level of corruption and incompetence that we’ve been dealing with, with this entire administration since day one. And just because Scott Pruitt is gone doesn’t mean there’s not plenty of others in this administration who are breaking the law or at least giving us the appearance of breaking the law, especially when it comes to misusing our tax dollars.

Ben Carson, the man who needed a $30,000 dining set in his office is another great example, because like Pruitt, Carson was only allowed $5,000 to redo his office. And that includes buying plates and silverware and the such.

One thing I love about Democratic Congressman Ted Lieu is the fact that he is one of the smartest members of Congress, to be honest, and he loves to get on Twitter and kind of troll these Republicans. And he takes pictures of his travel life and he flies coach. And he talks about how great it is. He goes out there and does these things that average people do. Not corrupt people. And he trolls them with that saying, “Hey, maybe you should try this, it’s really great.”

And that’s how I feel about these Trump administration officials. You want to make a secure phone call, Scott Pruitt? Then ask your staffers to leave the room, don’t put it on speakerphone and just talk in a normal voice into the phone. I guarantee you, you’ll be just as secure. You don’t need to charge us $43,000.

Ben Carson, you want to have people over to eat in your office? Yeah, go to Bed Bath & Beyond, go to Target, buy a dining set. Nobody’s going to walk into the office of Housing and Urban Development and say, “Ew, I don’t like your plates.” That’s not why they’re there.

The incompetence and the corruption inside this administration even beyond Trump is just absolutely astounding. Because it’s bad enough when you find one person like a Scott Pruitt to come in and be wholly corrupt. It’s an entirely different story when you manage to pack every single federal agency with the most corrupt human beings that you can find in this country. But that is exactly what Donald Trump did.