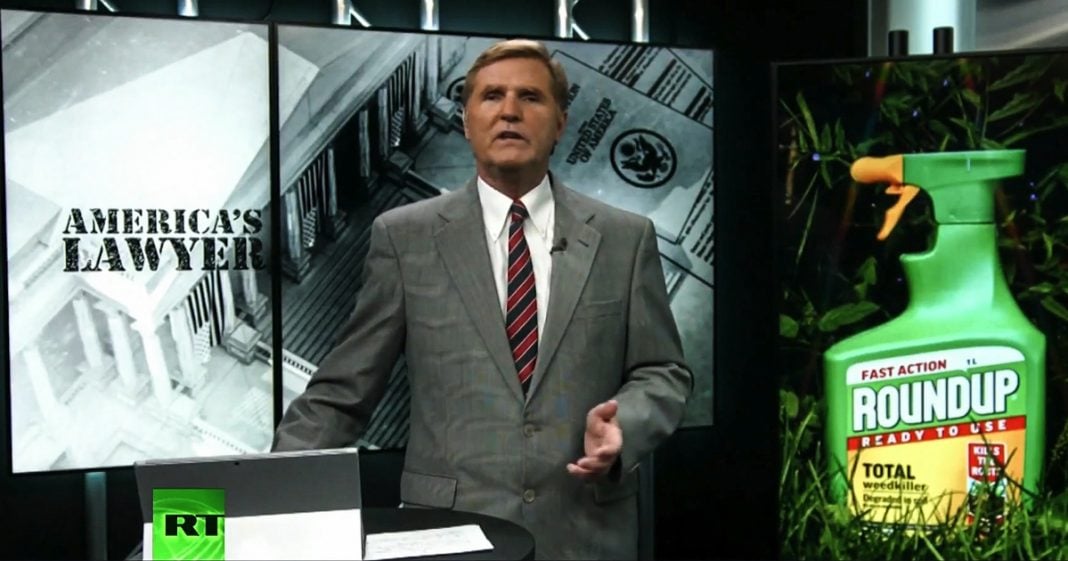 Via America’s Lawyer: A jury found Monsanto liable for refusing to inform the public that the active ingredient in the product, Roundup could cause cancer. Mike Papantonio gives the details.

And finally, tonight some good news from our ongoing coverage in the Monsanto trial as a jury found the company liable for refusing to inform the public that the active in the product, Roundup could cause cancer, and the jury awarded former groundskeeper Dewayne Lee Johnson with $289,000,000 in damages. Johnson’s been diagnosed with terminal cancer after years of exposure to Roundup. After eight weeks of trial proceedings, the jury found unanimously that Monsanto’s glyphosate based Roundup weed killer caused Mr. Johnson’s cancer to develop. And that Monsanto failed to warn of this danger. The jury also found that Monsanto acted with malice; they acted with oppression or fraud and that they should be punished for that conduct.

Monsanto refuses completely to warn customers of the dangers of the multi-billion dollar product, Roundup despite the worlds foremost authority on cancer, despite the international agency for research on cancer listing glyphosate is a probable carcinogen in 2015. During the trial the jury viewed internal Monsanto documents proving that the company had known for decades that glyphosate could cause cancer, and even though our dysfunctional EPA has failed to require proper labeling for Roundup labeling, an independent jury followed the evidence and used its voice to send a message to Monsanto. Now I gotta tell you, I got 16 of these cases set for trial next year. And I’m gonna show even more about how corrupt this company actually is.