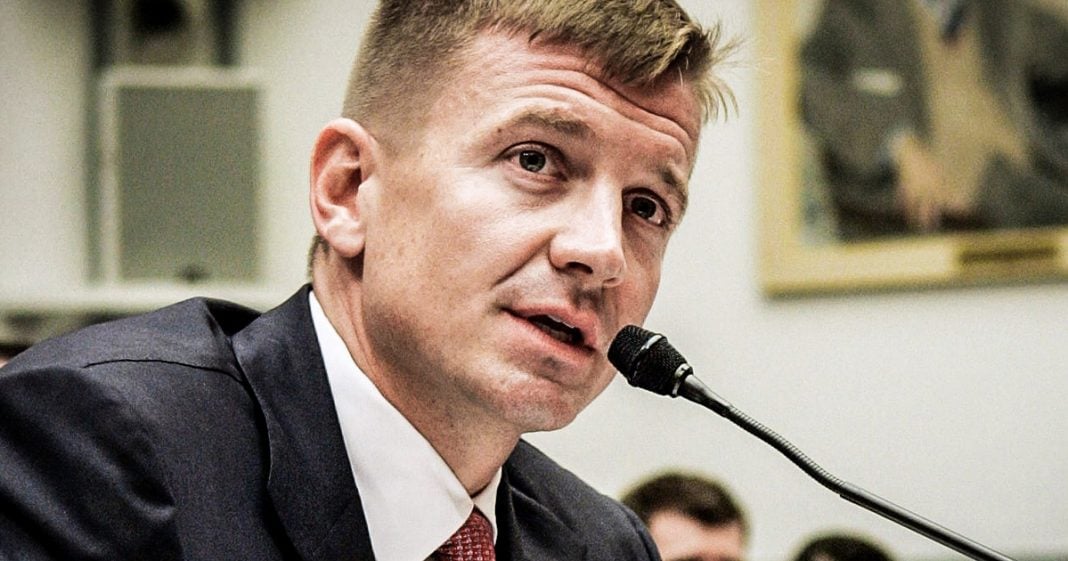 Erik Prince, a close confidant of Donald Trump and the founder of the private mercenary firm Blackwater, has been making the rounds on cable news recently to explain his plan to privatize the US’s war in Afghanistan. This seems like the kind of thing that Donald Trump would easily approve, and it would lead to an unmitigated disaster for our foreign policy and the people of Afghanistan, as Ring of Fire’s Farron Cousins explains.

The wars that are currently being fought by the United States and basically, the wars that have been fought by the United States since the year 2000, have been heavily privatized. Whether it’s Halliburton or KBR, Blackwater, every possible aspect, everything that they can hand over to private contractors and not have the military run, they are more than happy to do it. They get ripped off every single time. We have groups like Blackwater that basically committed war crimes over in the Middle East as part of the war on terror, and yet, they’re still operating today.

In fact, recently, Erik Prince, the founder of Blackwater started doing a little media blitz talking about his plan, not just idea, but a plan to privatize the entire war in Afghanistan. For 17 years, the United States has been over there fighting in Afghanistan with no real goal, no real objectives. We’re just over there killing people, doing military stuff, right? Well, Erik Prince is sick of this. He’s sick of not having a goal. He sick of it not having an end, as most people are. But rather than end it, pull our troops out, bring them home so they stop dying over there, he wants to pull our troops out and send in his own.

It’s reported that Erik Prince, not that long ago, showed up at the White House. He’s a good friend of Donald Trump, he’s also involved in some of the collusion, mostly actually with the Middle East between the Trump campaign. But nonetheless, he shows up at the White House with a PowerPoint presentation extolling the virtues of privatizing the war in Afghanistan and handing him, Erik Prince, the keys to that war.

Military experts immediately shot this idea down. Because not only is it just a stupid idea on its face, but it also eliminates accountability and opens the United States up for a huge flurry of war crime accusations and lawsuits, and possibly even imprisonments. You cannot completely privatize a war to be fought by private company with their mercenaries funded by your country. Trump allegedly was kind of iffy on the idea. The White House says, “No, we’re not even considering it.” But that has not stopped Erik Prince from doing his little media blitz, mostly on Fox News, where he talks about his plan. Nobody questions it, nobody talks about what a stupid idea it is, but Prince understands that Donald Trump constantly watches Fox News, and if he wants to reach the president, that is the best platform to use.

Yeah, he showed him the PowerPoint, but if he really wants to drive that point home, he’s got to go on Fox News and discuss it, and that’s what he’s doing. That’s why his little plan to privatize this war starts to seem a little more likely. I think this is something that Donald Trump 100% would not only consider doing, but would end up doing. And that is the worst slippery slope that we could ever imagine as a country.

It’s bad enough that the office of the presidency has been dumbed down to be completely unrecognizable today. It’s bad enough that we have the slippery slope of all the campaign money going to Democrats, Republicans and everybody else. But if we hit the point where we start privatizing our wars, and we just have these well paid mercenaries that we send around without having to declare war, without any oversight, without anybody ever to say no, that’s going to be the point of no return for this country. That will be our downfall too, because other countries are not going to like that. They’re not going to like these private US funded mercenaries coming into their countries wreaking havoc, committing war crimes, yet not being held accountable.