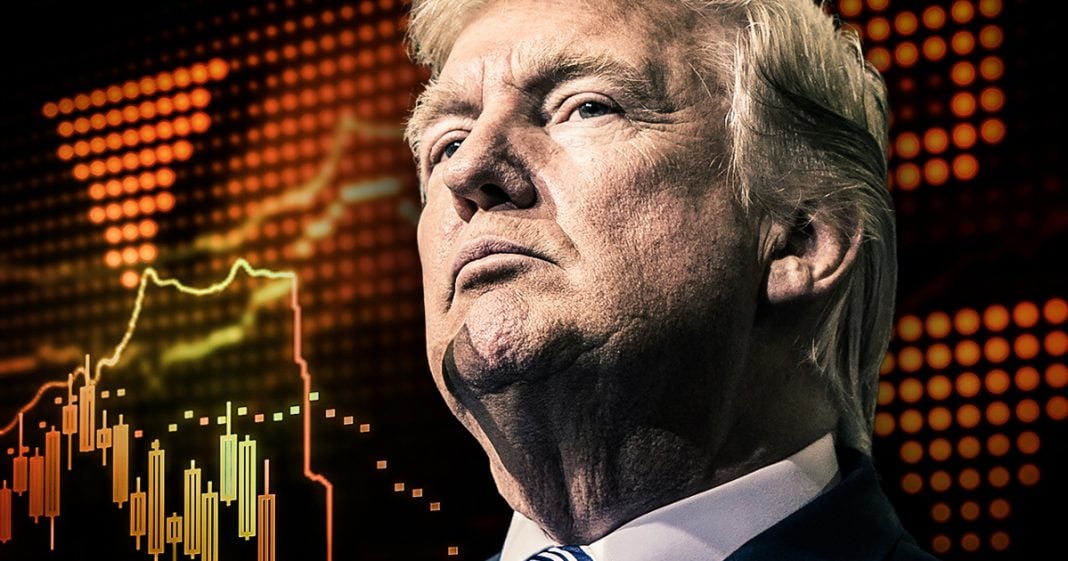 During his disaster of an interview with Fox News this week, Donald Trump seemed to understand that impeachment could easily be in his future, so he issued a dire warning: If he gets impeached, the entire stock market is going to crash. He’s warning us the entire United States economy could easily be destroyed if he is held accountable for his crimes, something that people on Wall Street don’t believe for a second. Ring of Fire’s Farron Cousins discusses this.

Something very interesting happened this week and, no, it’s not just that Trump’s former campaign manager is going to jail, or that his former lawyer is going to jail, though it is related to those things. The interesting thing that happened was that the language from the President and his attorney, Rudy Giuliani, has shifted. In the past they wouldn’t even mentioned impeachment. They wouldn’t talk about it. They, basically, always said, “President’s done nothing wrong, nothing to talk about here, let’s move on. Witch hunt, rigged, no collusion, blah, blah, blah.” And while Trump has still said, “Witch hunt, no collusion,” this week on Twitter, in all caps, in case you missed it. They’ve begun to talk about impeachment. During his interview with Fox News this week, Donald Trump actually warned us that if he is impeached, it’s basically going to crash the entire US economy.

He said that impeaching him is going to cause the stock market to crash. And a stock market crash would obviously and, unfortunately, lead to a pretty decent recession and economic mini-collapse, if you will, here in the United States. Unfortunately, everyone that works on Wall Street, or in finance, seems to disagree with him. People who spoke to Politico this week after the President made those claims that if we impeach him there goes the economy. They all said, “Yeah, that’s not how it works and that wouldn’t happen.” Other things that could cause the stock market to crash and, therefore, have a ripple effect through the US economy are the instability in the Middle East. The trade wars the President has been engaging in. The unemployment that, actually, seems to be getting worse in spite of what the administration tells us, which is a direct result of his trade wars. Deficits, like the one that they increased by 20% with their tax cuts.

There’s a lot of things that are about to lead to a pretty significant market downfall, but Donald Trump being impeached isn’t one of them. But it is important to note that he’s warning people now, “Don’t impeach me, bad things are going to happen if you do. You want me around, don’t get rid of me.” And then Rudy Giuliani, the day after, actually came out and said that if Donald Trump is impeached, people in this country are going to revolt. No, I think what you meant to say was that if Donald Trump is impeached, we’re going to know who in this country is truly revolting, because those are the only people who would be angry about Donald Trump getting impeached. But, again, Giuliani is trying to issue a warning, “Stay away from him. Don’t impeach him.” Instead of saying, “He hasn’t done anything impeachable.”

Do you see the difference there? It’s very slight in the language, but they now understand that impeachment is a very real possibility. And it is, most likely at this point, something that is in Donald Trump’s future. I know Democrats who are running for reelection in the House and Senate. They’re trying to avoid talking about impeachment. They’re not falling into the trap that Fox News is setting for them, trying to say that we’re running on impeachment. But believe me, it’s on everyone’s minds, not just those people seeking reelection. The word, impeachment, the impeachment process is on the minds of every single person who has paid any attention to American politics in the last few days. We’re all thinking it. We just need politicians courageous enough to follow through with it.