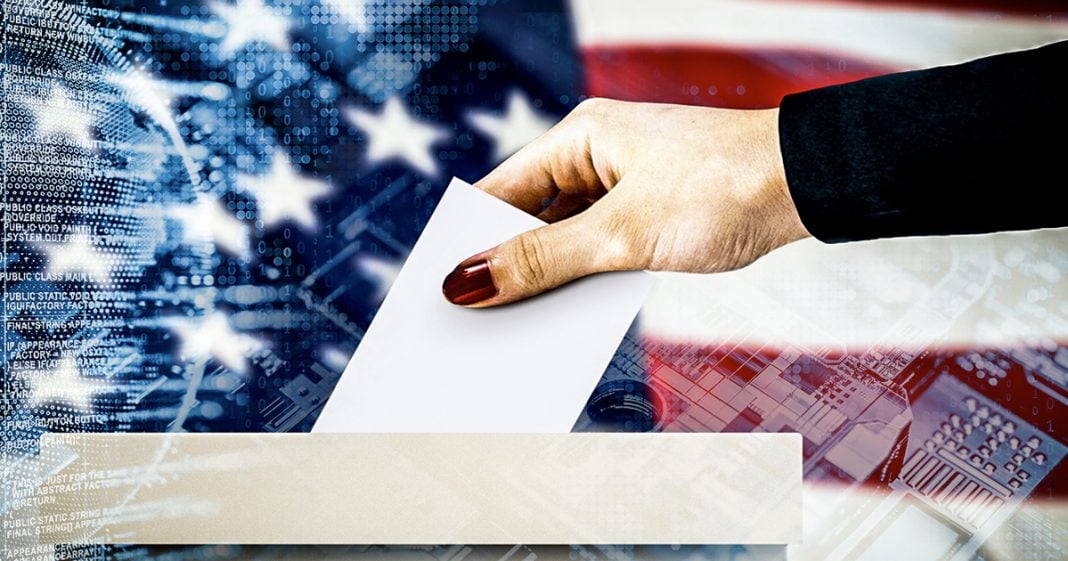 Senate Republicans abruptly cancelled a vote this week that could have seen the passage of additional funding for election security, even as reports are flooding in about how unsecure our voting systems truly are. These Republicans believe that any kind of disruptions on election day are going to work in their favor, and that’s why they refuse to act. Ring of Fire’s Farron Cousins discusses this.

Once again, Republicans in the Senate this week refused to protect our elections from outside hackers. What happened was that there was a bipartisan bill that would have strengthened election protections here in the United States. It would have streamlined cyber security information sharing between federal intelligence entities and state election agencies, provide security clearances to state election officials, and require adequate post election auditing procedures, so each election can be double checked and verified. Basically bringing a lot more accountability into our voting systems and providing upwards of $250 million more to protect them from hackers.

But on Wednesday of this week, Republicans in the Senate abruptly canceled a vote on this measure that could have brought it to the floor for a full Senate vote because they just didn’t want to do it. Now, the official line of reasoning here is because, oh state attorney generals weren’t happy with the final piece of legislation that they wanted to vote on. And that is true, because they wanted the additional $250 million for funding, which was not yet in the original legislation, but it was going to be added as an amendment by Democrat Amy Klobuchar. They weren’t allowed to get to that point because Republicans tabled the entire thing and said, “Well I guess we have to go back to the drawing board,” a drawing board that’s probably not gonna be finished until well after the 2018 midterms.

Here’s what we know right now. We have reports that, again not just Russia, but other countries, Iran possibly, China, who knows who else, are interested in hacking into our election systems. But that’s small potatoes compared to the fact that it doesn’t have to be somebody from another country. Anyone in this country with enough knowledge can hack into our voting systems because they are so insecure. As we discussed recently, at a computer convention with hackers, they actually had an 11 year old kid that was able to get into a replica of the Florida state voting systems change vote tallies and get out undetected in under 10 minutes. An 11 year old. That is how unsecured our voting systems are.

The reason Republicans don’t want to do anything about it, the reason they had previously voted down the additional funding, the reason they tabled the votes this week is because they believe that any election interference that happens in 2018 is going to benefit them. That’s why they won’t do anything about it. The worst part of the story is that we actually could have solved all of these problems as early as 2003, 2004 because we knew then. We knew 14, 15 years ago how vulnerable these electronic voting machines and electronic voting systems were. We knew that hackers could get in there and do this. It could be a guy down the street. It could be a guy on the other side of the world. Didn’t matter. But we did nothing then, and I have no reason to believe that at least before this year’s midterms, we’ll do anything about it now.