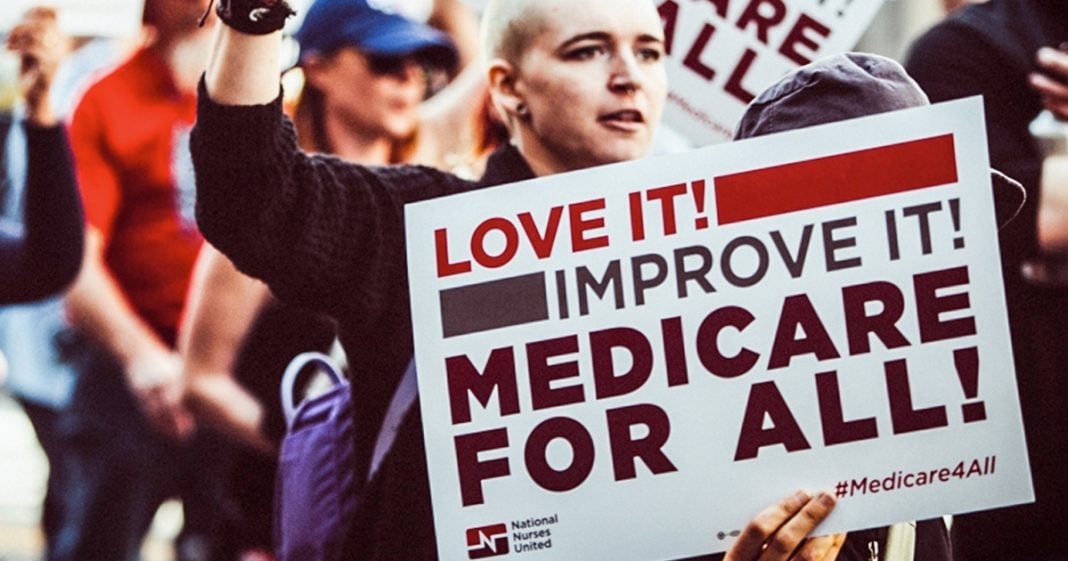 According to the latest round of polling, an overwhelming majority of American citizens say that they want a Medicare for All policy in this country, something that appears to be at odds with most of our elected officials. But this poll proves one thing – Medicare for All is no longer a fringe policy, but those in Congress who don’t support are actually the ones on the fringe and are going against the wishes of the public, as Ring of Fire’s Farron Cousins explains.

A new Reuters poll out this week has some pretty shocking information for members of Congress, and that shocking information is that 70 percent of the American public actually supports a Medicare-for-all health care system here in the United States. That includes 85 percent of Democrats and 52 percent of Republicans, and yeah, 52 is just a slim majority on that side. It is important to point out that a majority of Republicans think that we should have a Medicare-for-all system here in the United States. Overall, 70 percent, that’s all Democrats, Republicans and Independents and everything between included. 70 percent say that they want this Medicare-for-all health care system here in the United States. That is a phenomenal poll number for multiple reasons. Number one, obviously being that this idea of Medicare-for-all is no longer a fringe idea, it’s no longer a fringe belief. This is the mainstream. This is what most people in this country today want. It is mainstream. So any politician in D.C. who tells us that this is a fringe idea brought by the alt-left, the crazy progressives, the Bernie Bros, they’re dead wrong and they’re lying to you. This is what most people want.

The only people who don’t want a system like this, unfortunately, are the people who are paying off politicians sitting off in Washington D.C., people taking money from the pharmaceutical industry, from the health insurance industry, from the hospital corporation industry, they’re not gonna be allowed to price gouge us anymore through our hospital services or our pharmaceuticals or our health insurance if a plan like this were put in place. It would create more competition, it would create a lower-cost option for people who want to go that route, therefore driving down the costs of private health insurance in order for them to be able to compete in the market because this is not just taking over. We’re not getting rid of private health insurance. If you want it, you can still go get it, assuming you’re able to jump through all of the hoops that they want you to jump through like never having a preexisting condition and being able to afford hundreds upon hundreds of dollars every single month for the plan.

Medicare-for-all gives us a better option, a less expensive option, and once that rolls out, those private health insurance companies are either gonna have to lower their costs and lower their standards to let more people with preexisting conditions in, or they’re gonna fall by the wayside and go out of business. There are no downsides to a Medicare-for-all plan. In the long run, it saves us money compared to what we’re all already spending per capita on healthcare each year. The Koch’s own study accidentally proved that. So it’s time for politicians to get onboard. I know the Democrats don’t really seem to have a cohesive message at this point for the 2018 midterms, but here it is. Medicare-for-all. Three simple words, 70 percent of the public supports it, there is your platform for 2018, and if you can’t get it done, if you don’t take back the house and Senate, then that should be the overwhelming message for 2020. You’re not gonna win on hating on Trump, everybody hates on Trump. You’re gonna need a message, and this new poll from Reuters basically spelled out, clear as day, what that message needs to be.