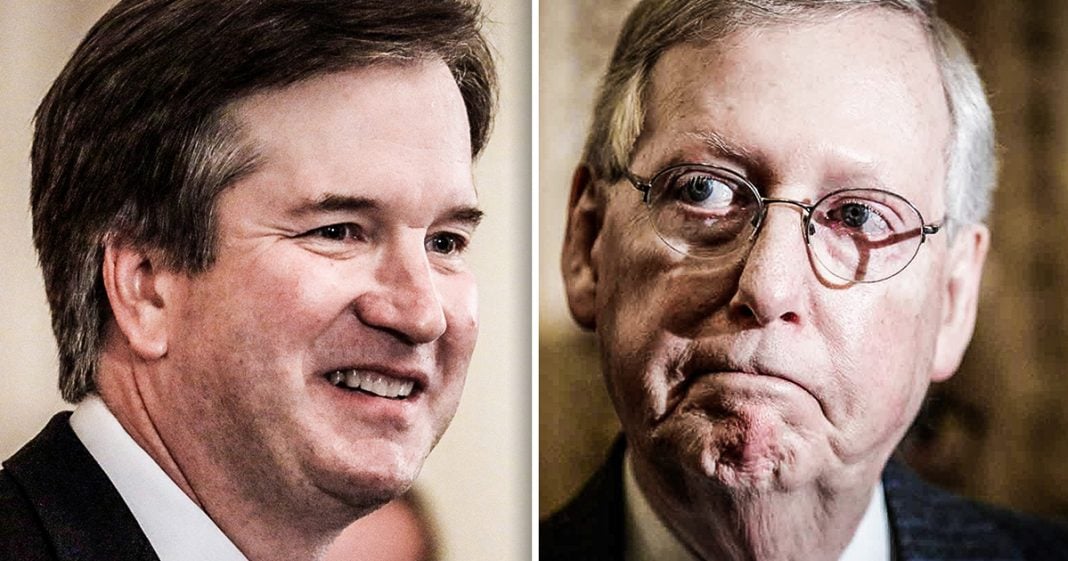 Republicans in Washington, D.C. can see the writing on the wall and they understand that their days in power are numbered, so they are doing everything they possibly can to pack our judiciary with as many pro-corporate right wing judges as possible. These include judges who have been classified as unqualified by the American Bar Association, and of course a Supreme Court justice – all of whom could be on the bench for the rest of their lives, endangering consumer protections for generations. Ring of Fire’s Farron Cousins discusses this.

Republicans in Washington D.C., appear to realize that the end is near for them, to put it mildly. They know that either Donald Trump is gonna be impeached or otherwise removed from office, or, more importantly, that they’re about to get their butts handed to them in the 2018 mid-terms. That is why we have seen in the last couple weeks here, this fevered push by Conservatives, led by Mitch McConnell and the Senate, to confirm as many of Donald Trump’s judicial appointments as possible, that includes Brett Kavanaugh to the U.S. Supreme Court.

This isn’t just speculation. This is actually what Republicans are doing right now. This is their goal. They’re out there, constantly telling us every single day, that Democrats are stalling all of these judicial appointments. They’re not able to do what they want to do, and get these people in place. “This is just unprecedented,” they say. Unprecedented. Except for the fact that, I mean, Merrick Garland, for one, guy was held up for a year, so that he couldn’t be voted on in the Senate. Not to mention the fact, that when Obama left office, Donald Trump inherited 103 judicial vacancies, that he was, then, allowed to appoint people to, for the rest of their lives.

Now, a good number of those are Obama’s fault. He easily could’ve done some recess appointments, filled those slots, and put in pro-consumer justices. Instead, he decided to tuck tail and run, didn’t do anything about it. Republicans continued obstructing, not letting any of his nominees go through, and in many cases he didn’t even nominate someone, for that particular judicial vacancy. So, he left 103.

Donald Trump inherited an unprecedented number of judicial vacancies, all of which, carry a lifetime appointment for whoever he puts on the bench. Republicans understand that they’re not going to hold on to the Senate forever. They may not even hold onto it after this year’s mid-terms, and if they do, the margin, at that point, may be one single vote. They’ve got to get as many of these people as possible on to those benches, including Brett Kavanaugh.

Here’s the problem. They’re all Brett Kavanaugh’s. All of these nominees that Donald Trump is putting up, are Brett Kavanaugh’s. They’re horrible on social issues. They’re horrible on reproductive rights, and a woman’s right to choose. And, they’re horrible, on every single consumer issue. These are pro-corporate, hand picked by the Federalist Society, and the Heritage Foundation … people that they want on the benches to protect corporations, and to screw over consumers, every chance they get. That is what is happening right now.

Mitch McConnell, according to reports, basically, since the beginning of the Trump administration, has been working with the Federalist Society, meeting with them. They’ve been kind of laying out the road map of who needs to be nominated, which Mitch McConnell, then, takes to the president. Those are the people he picks. Those are the people that Republicans are trying to ram through right now, either because Trump’s not gonna be around for much longer, or, because most of those Republicans in the Senate aren’t gonna be around much longer.

They’re gonna pack the courts, including the Supreme Court, remake them for generations, and remake them in a way to where our justice system no longer even pretends to work for consumers. If that happens, at that point, corporations will officially control every single part of our government.