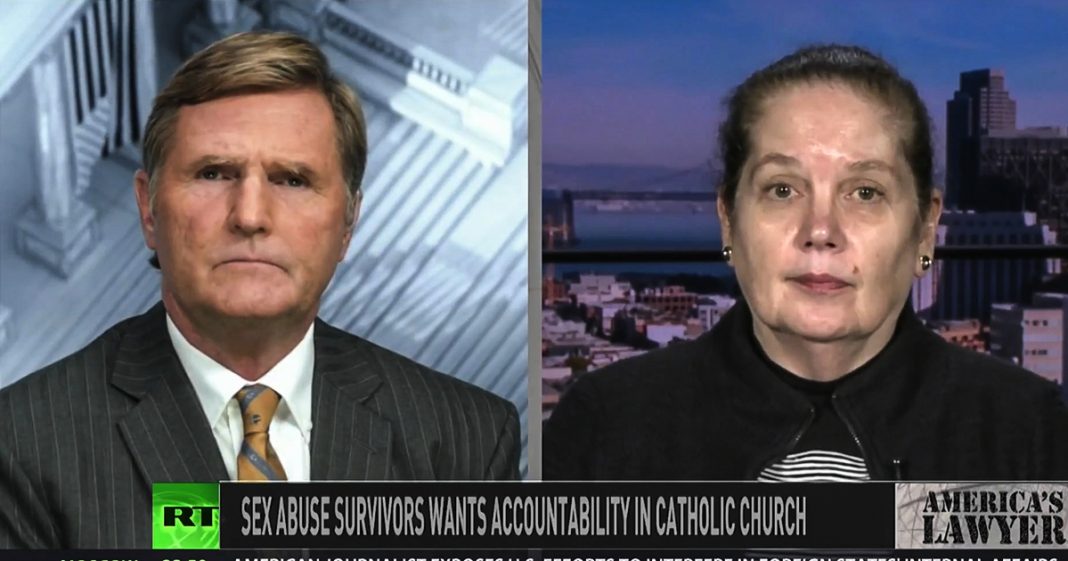 Via America’s Lawyer: Church leaders preferred to protect sexual abusers and their institution above all else. Most especially, they wanted to protect money. Mike Papantonio is joined by Melanie Sakoda, Secretary of the Board of Directors of SNAP, to discuss.

Mike Papantonio: The lengthy catalog of clergy sexual abuse by the Grand Jury Report was extremely difficult to read as the grand jurors note, “Priests and other Catholic leaders victimize teens and children of all ages.” But all of them were brushed aside in every part of the state by church leaders who preferred to protect the abuser and their institution above all else. Most especially, they wanted to protect money. To discuss this is Melanie Sakoda, Secretary of the Board of Directors of SNAP, the largest, longest running and most active support group for women and men abused by religious and institutional authorities.

Melanie, for two years a grand jury in Pennsylvania investigated these abuse cases in six Roman Catholic churches across the state. They pored through half a million pages of church documents held in secret archives. This was an extraordinary cover up that went on for decades. This is through what you’re used to seeing isn’t it?

Melanie Sakoda: Exactly. We think this is happening everywhere that the Catholic church operates.

Mike Papantonio: Well, it operates in a large part because they really have developed a system for doing this haven’t they? I mean if you were to call on your experience on how they go about operating like this, how would you describe it? If you were to, just to kind of give us thumbnail sketch on how they engage in these cover ups, what would your take be on that?

Melanie Sakoda: I think that it’s their standard operating procedure that the bishops know that if some scandalous information comes to them, they’re supposed to keep it quiet, put it in their secret file, and cover it up. Until that changes, we’re not going to see any real solution to this problem.

Mike Papantonio: Well, is this a meaningful moment at all? I mean where it comes to what’s happened here, do you think this really changes anything about the way that the Catholic church does business versus what the Catholic church should be doing to protect children going forward? What is your take on that? I mean every time we see one of these stories we kind of wait for that moment that, you know, there’s a sea change now. We’re really going to expect something tremendous to happen. What is your take in that regard having done this for so long?

Melanie Sakoda: I don’t think we should be waiting for the church to do something. They’ve had all this time and they haven’t done anything. I think what people who are still a part of the Catholic church should be doing is they should vote with their feet and with their wallets. I think that may bring some attention to it. I don’t know that if it will change the policies that are coming down from the very top, but hopefully … because what you need is you need a policy that says, “No, you don’t put this stuff in the secret files. You send allegations of criminal behavior. You take them to the police. You let the people in the parish know that this is what you have done.”

Mike Papantonio: Yeah, tell us a little bit about SNAP so people understand what SNAP is and why you’re out there. Tell us about anything that you think you’ve been able to accomplish with SNAP in pushing back, not just the Catholic church but really across the board in all religions. What do you think you’ve accomplished and tell us a little bit about your organization.

Melanie Sakoda: SNAP is a network of survivors and people who support them. We hold, in various parts of the country, we hold peer-to-peer support groups so that people can came, they can share their stories, they will know that the people there will understand and believe them. The people that come will know that they are not alone. We also have an advocacy arm, which is we have people doing media events as they’ve been doing in Pennsylvania yesterday and today.

That, I think, is an important part of what we do because we let people know that we’re out there. We let survivors know that they’re not alone. That includes all survivors, not just those in the Catholic church. I think this has had an impact. I think we’re finding a little bit that people are coming forward at earlier ages and there is … we get our name out there. People know that we are a group that they can come to. Now we’re not the only one, but we are one of the groups that they can come to for help and support as they just come forward or if they want to pursue some sort of action against their perpetrator or the people who may have covered up for their perpetrator.

Mike Papantonio: Melanie, one of the things that came out of this report was how the different priests sharing information about victims. It paints an image. There just wasn’t one single abuser, but really there’s no other way to describe it as a systemic network. Okay? I mean that’s the way I see this. Has that been your experience when you’ve, when SNAP has been involved in other cases, do you kind of see the systemic nature to this entire thing? I don’t guess the systemic networking that came out in this report surprises you, does it?

Melanie Sakoda: No. Just, I think, it was last year what you had … on Netflix you had the very fine documentary called The Keepers, which documented the systemic abuse of girls at a Catholic high school in Baltimore. So this is not something unusual. I mean it doesn’t happen … not all the abusers network, but some of them do.

Mike Papantonio: You know Pope Francis’ response to the grand jury report has been to address the problem in a way that’s really never been done before. I mean you have to admit there’s something different about what he said. As he was saying it, again, I read the grand jury report and I don’t come away … I’m not really moved by the idea that we’re going to see much change in this monstrosity, this money, money monstrosity that has been built called the Catholic church. What is your take on what the Pope did?

Melanie Sakoda: You know I think the only thing that I noticed is I was very happy that he called these activities what they are. They’re criminals. They’re crimes. Its criminal behavior, so that was a step forward because usually they’re referred to as sins. Everybody may do things that are wrong, but not everybody is a criminal. So that was very, you know, was a step forward. Otherwise, where is the action? In 2002 when the Boston Globe revealed all the problems in the archdioceses of Boston, Cardinal Law was removed. But what happened? He got a cushy job at the Vatican. When he died, a year or so ago, he got a priest’s funeral. He was honored. That’s what needs to change.

Mike Papantonio: Nothing really has changed as I’ve watched this. Do you think the Catholic church is reforming in any way Melanie? I mean do you really think that they’re reforming is any way?

Melanie Sakoda: My take is no. I mean they have policies and procedures. But policies don’t protect children. Actions are what protects children, and that’s what you need to do. You need to have action, and you need to start removing those people who are covering it up or if it’s a policy, if they’re simply doing what they’re supposed to, then you need to change the policy, and you need to make sure that this doesn’t happen.

Bishop Ronald Gainer: In the name of our local church, I voice again my heartfelt sorrow and sincere apology to all survivors of clergy sexual abuse. The practical changes to avoid repeating the sad and troubling past are in place, and are being faithfully observed, and will continue to be improved in our dioceses.

Melanie Sakoda: I’m not going to hold my breath and believe it. They have to show me. You know?

Melanie Sakoda: They have to start … you know if they really want to do it, they release all their files.

Mike Papantonio: Well, I think everybody listening to that has to reaction the same way. Melanie, thank you for joining me. Keep up the work with SNAP. It’s more now than ever, we really need your engagement in all this.